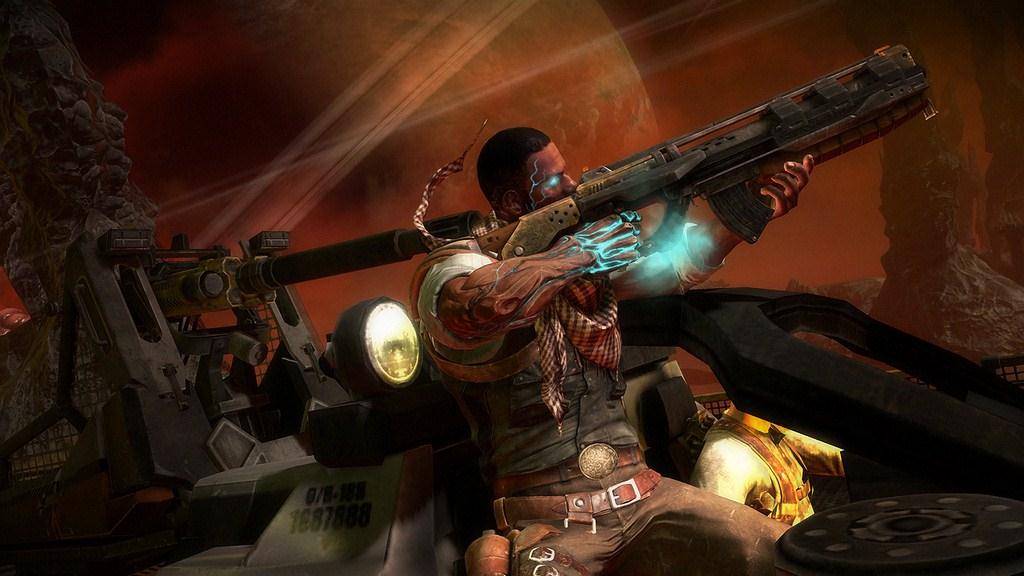 Written by Jeremy Duff on 6/18/2012 for PS3
More On: Starhawk
Let me paint a picture for you. You’re pinned down behind a small barrier; 3 to 4 enemies are closing in on you on foot while another continuously dive-bombs you with a futuristic, miniature jet. You have exhausted your entire arsenal and are down to nothing but a simple pistol with unlimited ammo. To make things worse, that jet has just landed and turned into towering mech and is now closing in a few paces behind those foot soldiers. Suddenly, when all hope seems lost, out of the sky drops a giant box which crushes you enemies in an instant and then unfolds to reveal an ammunitions bay meant to replenish your supplies. It may sound crazy, but this is something that is fairly routine in Starhawk.

Lightbox Interactive and Santa Monica Studios latest release is the direct sequel to one of the biggest launch titles of the PlayStation 3, Warhawk. This time around, players are taken both skyward (to the stars) and back in time to a western-style era. The two settings may sound like polar opposites but in actuality, they compliment each other well and offer one of the best multiplayer experiences available in gaming today. Unlike Warhawk, this isn’t just a multiplayer affair; there is actually something for those loners out there in the package too. 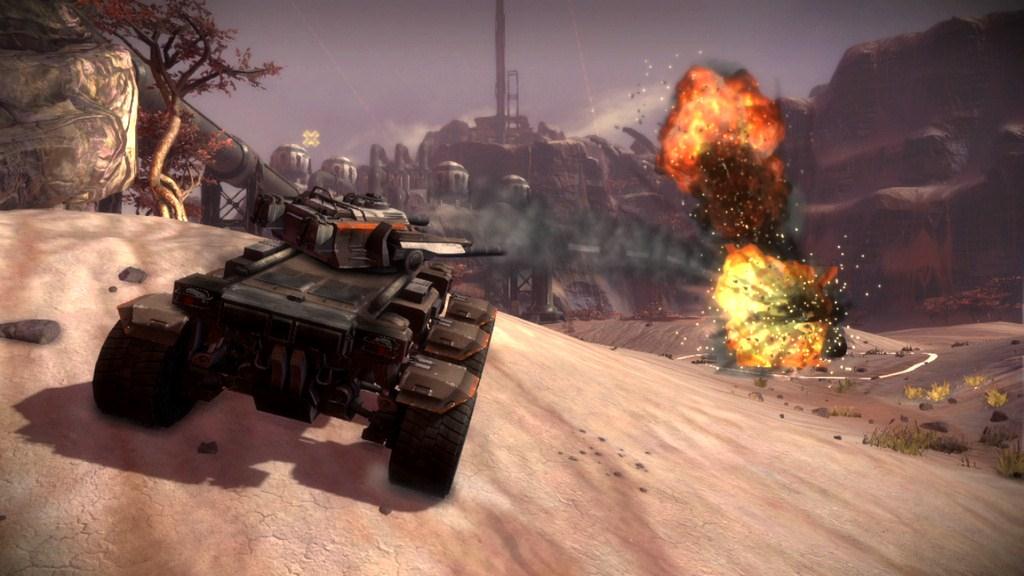 The development team has implemented a “full” campaign mode for those looking to enjoy the adventure on their own; however, I use the term “full” very lightly. Players are given a story to experience but it is as forgettable as it is short. You control Emmett Graves, a farmer trying to survive in the world fueled by the then-modern-day gold rush of Rift energy, or blue gold as the locals like to call it. While fending off an attack from a rogue group of Outcasts, Emmett and his brother are exposed to an unusually large amount of Rift energy, forever changing them. While his brother was engulfed by the energy and turned into an outcast (a savage-like mutant), Emmett has managed to retain some of his humanity and dedicated his life to battling the Outcasts. You can pretty much see where things are going just based on that intro: Emmett eventually comes face to face with his brother and is forced to partake in a fight he never wanted to have.

The whole story is very linear in its design and flow as well as in its structure; you play through from point A to point B and that is it, no frills and no surprises. There are some nice cut scenes used to tell the tale between action scenes which are presented in the form of hand drawn, 2D motion comics. The visual style really meshes well with the art design of the world. Everything is drab and washed out with the exception of the emphasis placed on the blue energy emitted by the Rift. This truly gives the game a visual-personality all its own.

The purpose of the game isn’t to tell you a story though, it is to teach you how to play the game and get you into the action. The entire solo experience basically serves as a giant tutorial for the multiplayer portion of the game. The game plays a lot like its predecessor with one HUGE difference: the build and battle system. 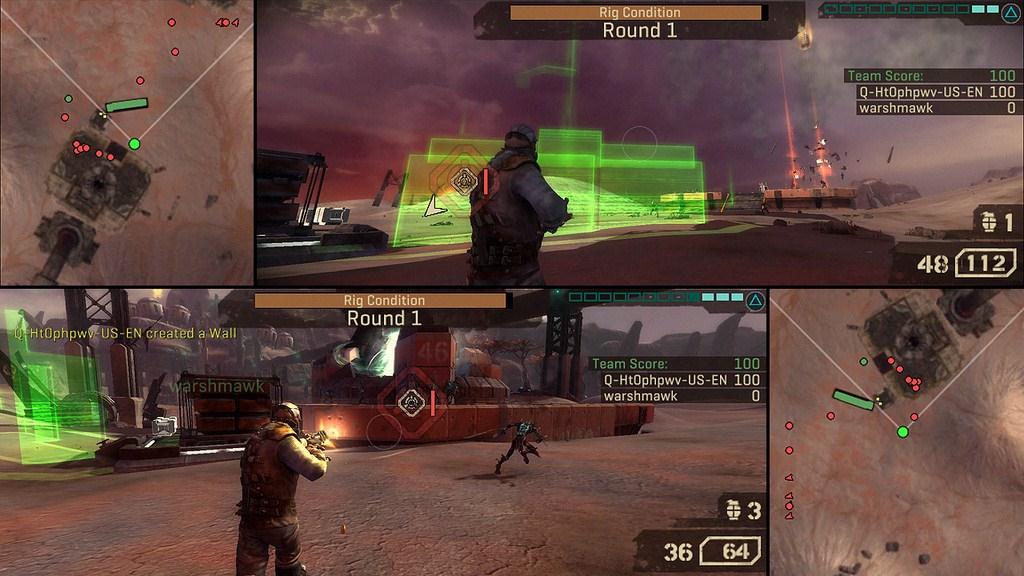 Fueled by the collection of Rift, the games takes on a pseudo-RTS like property that challenges players to gather resources to expand their arsenal. Rift can be collected by either killing other players to drawing it out of deposits found around the various maps. Rift that you collect can then be spent to purchase a variety of structures within the game world. These vary from simple barriers and walls to vehicle depots, supply bunkers, and sniper towers. They can all be called down onto the playing field in a matter of second, assuming have have enough Rift to purchase them, and dramatically alter the game.

Learning to get the most out of your structures is the key to the Starhawk experience. These are more than just simple buildings that appear in the landscape, these are tools of war. It is as important to decide when and where to place structures as it is to select which structures you will call down. As I mentioned in the beginning of this review, advanced players can ever utilize the drops as weapons in times of dire need. It creates an amazing atmosphere and thoroughly enjoyable experiences over and over and over again.

The manner in which this mechanic is implemented into the game is as fun as it is impressive (visually and systematically). Thanks to the large number of options offered, players are given the ability to really turn the various maps into their own unique creations. Not only does this alter the landscape visually, it can mold the environments into drastically different experiences. Never has the statement “no two games are exactly the same” been more applicable. All of the structures are also completely destructible, which adds another level of strategy to the game as well. 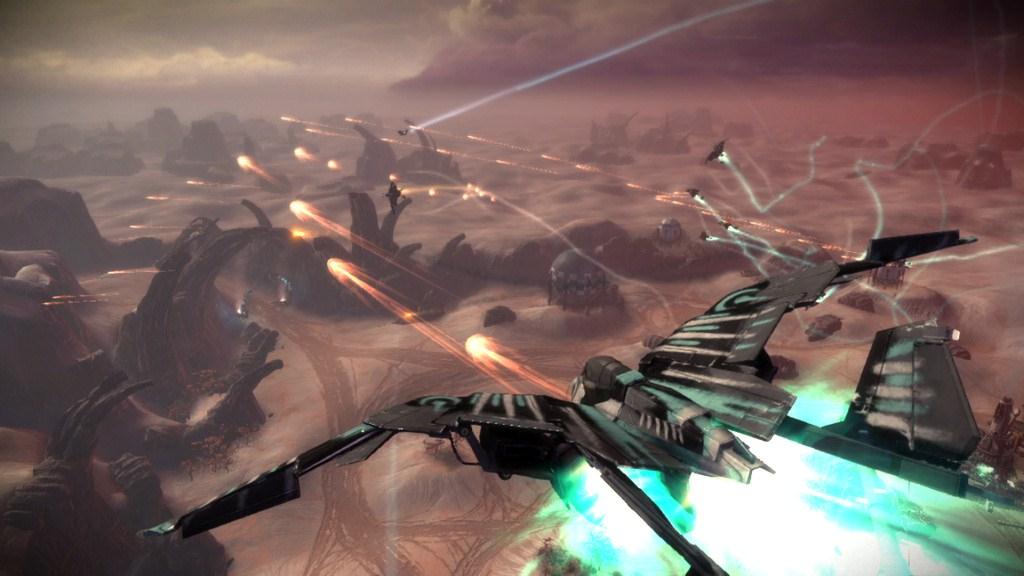 While short, the campaign does touch all of the necessary bases in showing you the ins and outs of the gameplay system utilized by the game. You will learn about all of the various structures, their strengths and weaknesses, all of the weapons, and all of the vehicles available throughout the game. Don’t get me wrong, there are some epically-fun battles presented to the player but they are all over and done with far too quickly. That is probably a good thing though because you can get in and out and move on to the good stuff: multiplayer.

The multiplayer section of the game is where it truly shines. Combining varying levels of customization and strategy, the game delivers an extremely unique and varied gameplay experience each and every match. There are a couple of different match types: deathmatch, team deathmatch, capture the flag, and zones, as well as a variety of maps, but they are all dramatically altered by the players you join up with in the game.

Just as with most modern shooters, the key to the game is earning experience throughout your various matches which will grant you access to different customization options. this customization runs the gamut from visual / costume alterations to a variety of perks and skills as well as a plethora of options for your character loadouts.

The gameplay experience offered is extremely varied, which works to the games benefit. As a basic third person shooter, the gunplay and shooting mechanics of the handheld weapons are average at best. When you mix in the vehicle options though, it becomes something special. Starhawk gives players a variety of vehicles to use, ranging from jetbikes (Sidewinder), dune buggies (Razorback), tanks, and jet-like mechs (Hawks). Each one offers a unique gameplay experience completely different than the rest, which adds to the “replayability” of the game in a major way.

Be warned though: you will want to play the game with friends. Why you ask? Because there is no ranked game or matchmaking option available in Starhawk. Players can choose to either join a random game or browse through a server list to join a game in progress. Nearly all of these games will contain groups of friends playing together which will almost always make you the odd-man out. If you have a friends list filled with other Starhawk players however, this shouldn’t be an issue.

Starhawk is an absolute blast to play, that is once you dig below the surface and get to its core. The lackluster solo experience and unfriendly nature of the multiplayer grouping may turn some players off when they first play the game, but if you stick with it a little bit and learn the nuances of the game, you will discover that it is one of the best multiplayer experiences available in gaming today. Every online match is truly drastically different than the other and the excitement never seems to end. If you only play games by yourself, you could probably pass here but if you enjoy playing online with friends, Starhawk is a no-brainer.
Starhawk is truly a gem in the PlayStation lineup of 2012. Frantic and addictive multiplayer combined with some unique gameplay elements make for one of the best multiplayer experiences available in the industry today. It’s just too bad that the multiplayer experience fails to carry over to the single-player campaign.