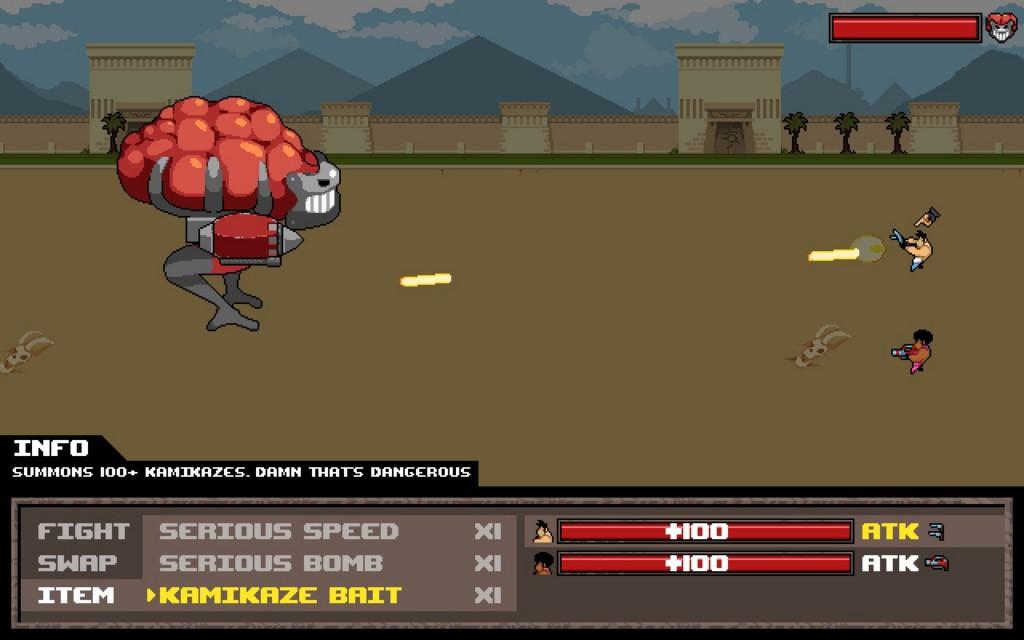 Okay, random is a pretty accurate description of this game in more ways than one. If you’re expecting something like past titles, throw that notion out the window. All I can gather from the story is that you’re tracking down Mental…but that’s about it. Then again, with a lot of games, I’m more about the gameplay than the story, so how does that hold up? Well again, it’s a bit different from the first person shooter games in the franchise. In each area (which is only one screen long), you have to get from point A to point B, sometimes solving little puzzles along the way. Much like typical RPGs, every so often you’ll come across a random enemy encounter, except this isn’t just against one enemy, or even a few. Most of the non-boss battles are against huge hordes of enemies. That would absolutely suck for typical turn-based battles, so how does it work? 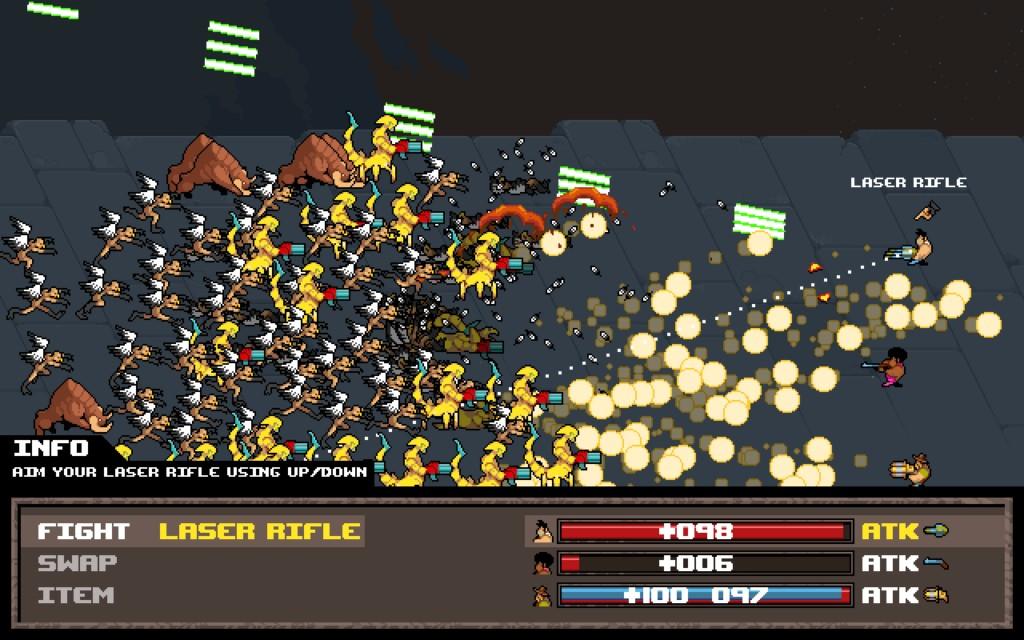 At the start of each battle, you issue orders to your team. You begin the game with just Sam, but you’ll quickly pick up a couple allies along the way. The orders you can give are Fight, Swap, and Item. Choosing Fight will make that character attack with whatever weapon he’s currently holding, and with most of them you can aim them in a certain direction or choose where they’ll impact for weapons like grenades. Swap will let you switch out the weapon that character is holding, while Item lets you use one of your items to help your team or hurt your enemies. That sounds simple enough, but we’re not done yet. Instead of each battle being a standoff, you’re actually running away from the horde of enemies while they close in on you, and they can close in fast. What this means is you have to strategically choose which weapons which ally will use, and where to specifically aim them to have the most impact. Otherwise, you’ll plow through your health items much like I did. After you issue the orders, you have about five seconds or so before you can issue orders again, during which you can actually move your allies up and down on the screen to avoid incoming enemies and projectiles. This poses a small problem however: all of your allies move together. This makes it especially tricky to dodge incoming projectiles, as you’re likely to get blasted by some monsters while avoiding the shots of others, meaning one way or the other, you’re taking damage.

As you take damage, your allies’ health meters will drain (if you have any armor, that drains first) and once it hits zero, they’re out of action. You can bring them back by using a Revive, or if you survive the mission, they’ll rejoin the team. If all of your team is eliminated in a battle, you’ll lose a life. Yes, an RPG that actually has lives. Losing a life goes back to right before you entered the battle, but when you move again, you’ll likely re-enter the same battle. Lose all your lives and it’s game over, and you begin the area from the start. Each level consists of a few areas, at the ends of which you’ll face off against a boss. The bosses themselves aren’t too incredibly hard, but if you are having problems, there are a few items to help you out. As stated, Revives can bring back allies that have been taken out, and you can use a couple heal items to heal any or all of your team. There are also items to increase your team’s armor and speed, or if you’re really desperate, you can use a bomb to pretty much wipe out just about any enemy on the screen, or deal a huge chunk of damage to an annoying boss. 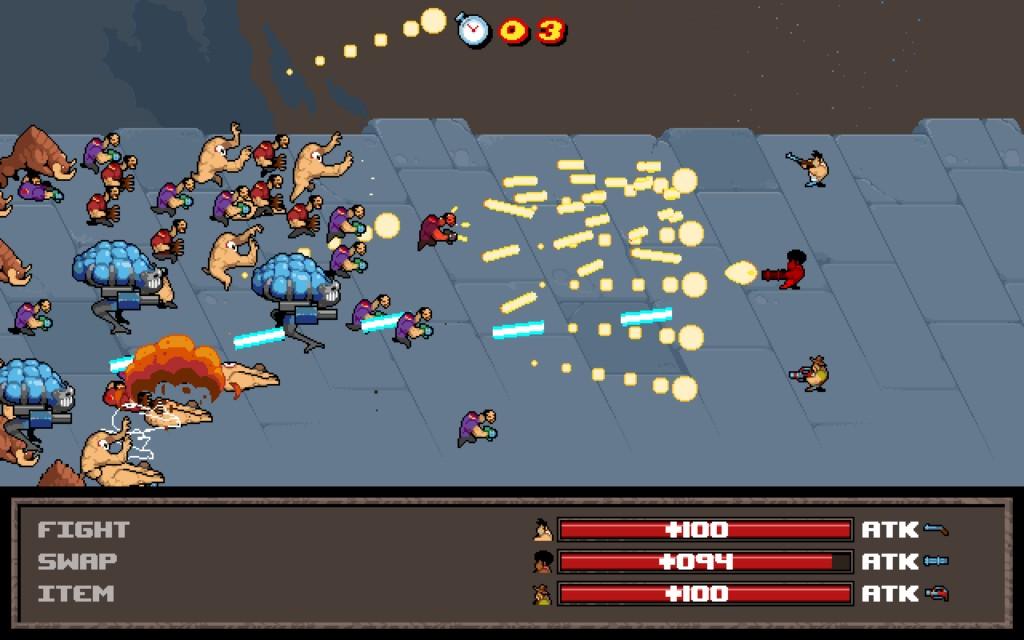 That’s about it for the game. While it’s a decent concept for a game (especially in a franchise that’s mainly FPSs), I feel that the execution could have been better. For starters, the game is only about an hour long. I put close to that in my time with it, but that also included quite a few deaths. My experience with the game was move around the area, fight monsters, move, fight, move fight, move, fight a boss, and occasionally solve a simple puzzle. In other words, it’s kind of redundant. Yes, I know it’s a Serious Sam game, and while I’ve never played the other games in the franchise, I feel like there could be a lot more to this. My biggest complaint is, like I said earlier, you can’t avoid taking damage, and lots of it. If you don’t have a lot of health items (or even if you do), you will die a lot. After dying multiple times on the same area, no matter what combination of weapons I used, I really had to fight make it through the entire thing as my patience was wearing thin.

There’s not much to this review but that’s because there’s not much to the game. Don’t get me wrong, it’s not a bad game by any means, but I feel like some things could be different. I don’t mind the ability to move your characters up and down during battle, but once you gain an ally or two, avoiding enemy projectiles becomes rather difficulty, and the whole loop of move, fight, move, fight gets rather tedious over time. The graphics are pretty good for being 16-bit, but after the first world, everything just seems repetitive. Granted, it’s only five dollars, so fans of the series might want to give it a shot, even if the game doesn’t last much more than an hour. I really wanted to give this game a chance and try to complete it, but I just didn’t have the patience.
While the game itself isn't bad so to speak, it does get repetitive kind of quickly. It's an interesting concept, and I am a huge fan of 16-bit games, especially RPGs, but the short length of the game and the repetitiveness of the battles is kind of a let down for me.