Written by Tina Amini on 2/22/2011 for 360
More On: Tron: Evolution
Tron: Evolution - an alleged integral part of the Tron storyline that takes place over multiple media platforms - takes place in The Grid. The Grid functions as the societal and work gathering of programs created by Kevin Flynn, amongst which a sort of computer-racism spreads. Because of an elitist (and arguably fearful) standpoint of the Basic programs against the free will-inclined Isomorphic Algorithms, many ISOs have to seek reprieve within this community.

The storyline attempts to cover a large expanse of the Tron universe, even as a precursor to the film Tron: Legacy. The way that storyline is presented, however, falls short of what potential it could have achieved. The only aspect of the entire story that really sparks intrigue is the action components. Monitor Anon, the protagonist, finds himself battling a virus spreading throughout The Grid while chasing a suspicious Clu and attempting to pull at the seams of the villain’s plot to destroy the ISOs along with Flynn.

Unfortunately, save for a few half-hearted cinematic scenes conducted between companions with whom you rarely interact and the anonymous and unpersonalized Anon, there is no depth to the storyline. The most gaping hole in the entire storyline, however, is the character relationships. These relationships are ultimately thin, when they could have been developed more. The storyline and the characters feel vapid because of a lack of emphasis on them.

As for gameplay, Tron: Evolution teeters between platforming and third-person melee combat. Anon uses his discs as a weapon against both the yellow circuit-outfitted virus and Clu’s orange/red circuited minions. In a leveling up fashion, the more memory you unlock the more access you gain to installing software that benefits the monitor. Disc mods - Heavy, Bomb, Stasis and Corruption - each feature an ability that helps to attack different forms of enemies. The Bomb Disc, for instance, is most beneficial against tanks, while the Stasis Disc is the virus’ kryptonite.

Using your disc of choice, Anon can preform various combos. They are fairly basic, however. Essentially, you’ll be holding the right trigger for most of the game (including for platforming). The concept of the gameplay fits very well within the context of the story. Ideas of respawning as reloading previous data, for instance, are a lot more of a believable connection than most games are allowed to make. Even leveling is phrased as gaining “memory” through which you can increase the volume of space allotted to installs.

A consistent issue I found with the platforming quality of Tron: Evolution was that it isn’t always smooth. The game constantly reminds you that you can combine moves by continuing to hold RT, but some of the placement of grappling points, launch points, etc. are in such an awkward placement that you actually have to maneuver yourself into the right position to be able to use them properly. While that may seem fitting for a challenge, it’s not fitting for smooth platforming. A lot of the platforming sequences also feel very familiar. Particularly, the sequence of wall running from one to another to get to a ledge is repeated multiple times. The redundancy makes the gameplay feel unoriginal, even if the world around you appears to be intriguing and unique. Fortunately, the music (several of which can be identified as the Daft Punk creation for the Tron: Legacy soundtrack) makes up for this monotony on occasion. 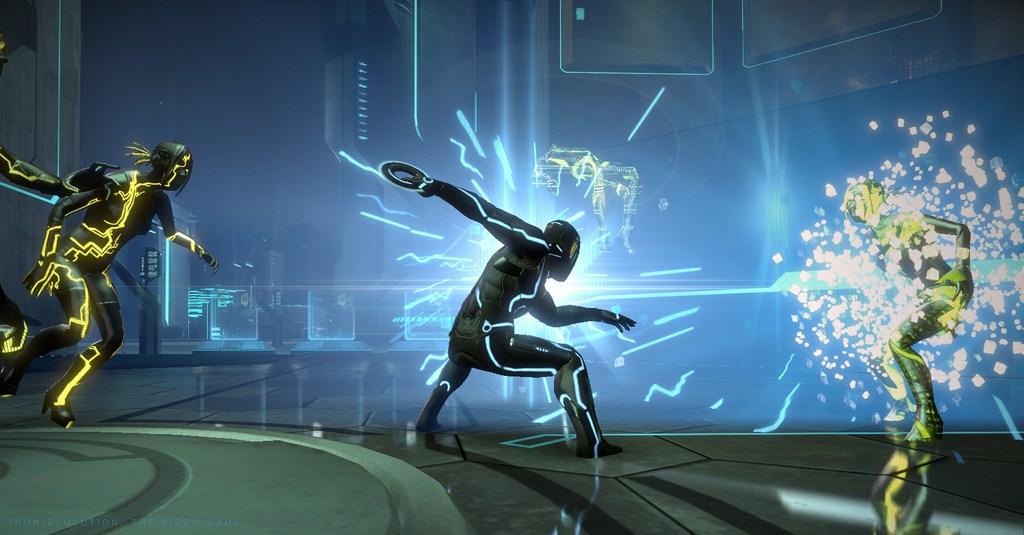 Multiplayer, although appreciated as a bonus feature, is a whole other monster in Tron: Evolution. With players jumping on their light cycles and chasing each other seemingly futilely, many of the huge maps feel like a mess. Other players will run on foot, sprinting and jumping away from each other while derezzing opponents with their particular chosen loadout. The maps feel like empty expanses, with very few points of encounter that function as an opportune place to meet for confrontation. After a while of playing multiplayer, players will understand where to go to interact with their enemies best, but none of the maps feel conducive to a battle environment. Multiplayer components of games are supposed to be addictive and competitive, but I felt no investment in winning any rounds of Tron: Evolution against human players.

For die-hard fans of the Tron universe, Tron: Evolution fits the bill for another piece of memorabilia. For those looking for a quality game with an immersing storyline, those qualities are remiss in this game.
Tron: Evolution had the potential for expressing a unique and interesting story, but fell short of expectations. Thin character relationships and a rushed storyline with half-hearted cinematics to connect them are all players can look forward to. Platforming sequences don’t hold interest either, as they quickly become monotonous repetitions. While multiple forms of the light discs and upgrades for your program make the combat gameplay increasingly worthwhile, it’s never consuming enough to be exciting for new installations to your program’s memory. All in all, Tron: Evolution is a fairly forgettable game.