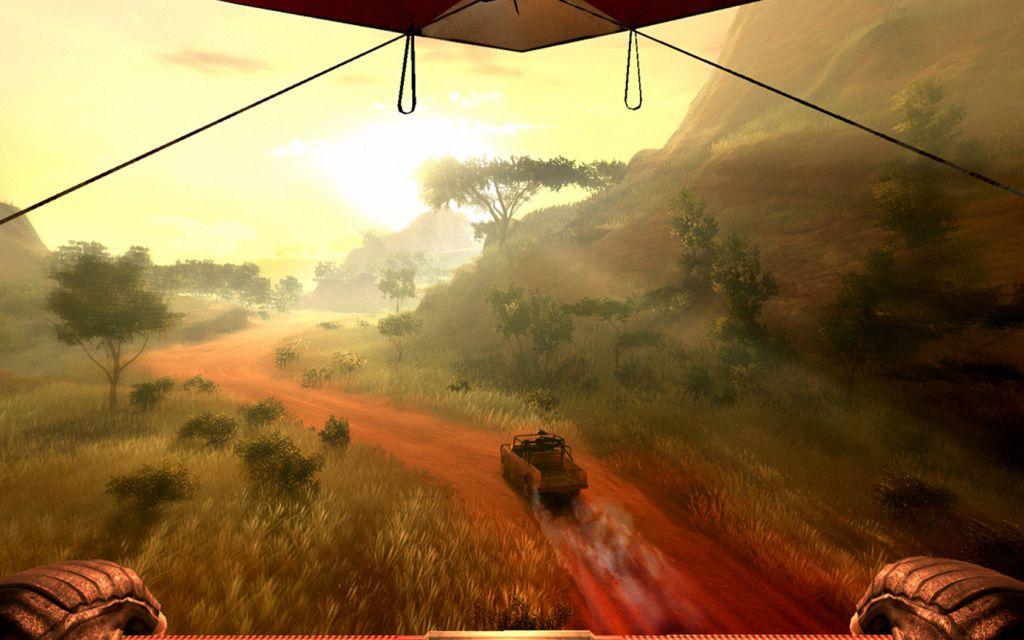 Written by Sean Nack on 11/24/2008 for 360
More On: Far Cry 2
The drums are tense but low as you make your way to the crest of the hill. Easing up over the tall grass, you spot the guards, you spot the machine gun nest, assess your chances. As you prepare to act, you hear an engine screaming toward you, bullets zipping by as an enemy vehicle barrels off the road, its grill yearning for your face. The drums rise. Your next action seals your fate.
This is combat. This is Africa. This is Far Cry 2.

Far Cry is an FPS whose chief ambition is to transcend the FPS genre, in terms of storytelling, design, and level of immersion. It does so with more than a modicum of success, and more than a little bit of frustration.

In the game, you play a mercenary sent by, presumably, the CIA to eliminate a troublesome arms dealer, known only as The Jackal. Once arriving the fictional African nation of Port Selao, your mission quickly goes sour; waylaid by malaria and without a job, you quickly find yourself running missions for the warring parties, the UFLL and APR. What this game is definitely not is a direct sequel to the original Far Cry; in this game, there are no mutants, no cartoonish villains, no faux-open-world gaming. While the original Far Cry had only the faintest notion of, well, coherent plot, FC2 has a fairly rigid if open-ended mission structure.

The missions are varied, but not by much. Attack this, kill this person, grab this case of something or other, wash, rinse, repeat. Your "buddies", NPC's you meet along the way, offer you secondary objectives, but these usually fall into one of the aforementioned categories. While the specific mission objectives themselves are somewhat repetitive, the saving grace is the varied terrain: only a few missions, at least in my first playthrough, took place in an area more than once. No two locations are remotely similar. The diamond mine requires a different tactical solution than the post office or the airport or the fort. What can get repetitive is driving around the map and eliminating checkpoints which immediately respawn their guards, but I found it repetitive only in the early stages. Later on, each checkpoint was practice for a new strategy, a new solution to the problem.

Each mission is the tactical equivalent of a word problem: if you have Molotov cocktails, a light machine gun, and an RPG, how do you use those tools to maximum effectiveness? Far Cry gives you almost no shortage of option for levying destruction. No less than six assault rifles, three each shotguns, pistols, and sniper rifles (technically four, the dart rifle does long-range work but it's qualified as a "special weapon"), two light machine guns, two submachine guns, an M79 grenade launcher, IEDs, a flamethrower, and a man-portable mortar.

Each weapon degrades over time to the point where they will start jamming and then eventually blow up in your face, though you can purchase reliability and accuracy upgrades that make a significant difference, and this can add an element of desperation if a person fails to properly prepare for their mission. If you're a member of the Preparedness Patrol, like I am, this is resolved rather simply by swinging by the not-all-that-conveniently-located weapons shops and swapping out your equipment. Further, I'm rather impressed by the realism with which Ubisoft approached the weapons selection and modeling; with the exception of the fact that all the weapons are left-handed (as evidenced by spent brass extracting to the left), they are all dead-on with regards to look, feel, and sound. The AK rattle and the RPG especially gave this old infantryman a flashback or two, and the IED's are incredibly realistic, what you see in the game is what it looks like in real life. 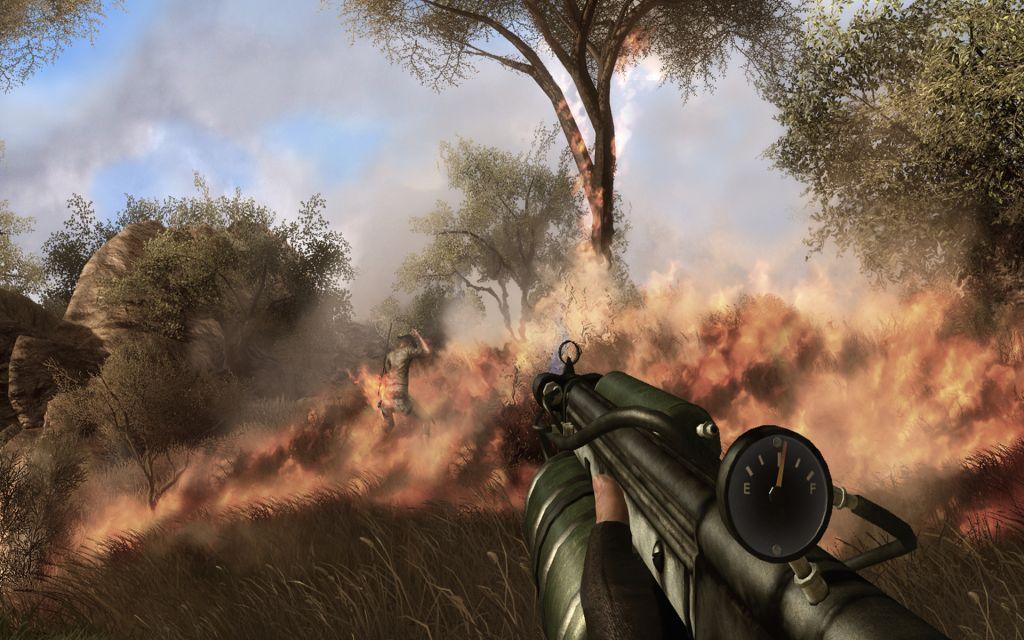 This attention to detail and complete immersion is a hallmark of FC2's gameplay. The player never leaves the first-person perspective in the game, which makes for some jarring moments. The map system is entirely in-game; hitting select whips up an adjustable-scale map and GPS-unit, which helps to keep the massive environment from being overwhelming. Weapons repair, vehicle repair, navigation, story-telling, everything takes place in the first person, keeping the game immersive, but the illusion is lost in certain areas.The most glaring omission, with regards to "physical" game-design, is the inability of the player to climb rocky surfaces. The game follows what I call the Morrowind Principle: the lighter-colored rock is walk-able, the darker rock is not. If the player could climb those surfaces, it opens up much better options for sniper positions, machine gun emplacements, and places to hide diamonds. Cases of diamonds are scattered throughout the map, which is, in itself, not at all a bad idea, but the designers put some of the cases in places that an Olympic gymnast would have a hard time hopping up to, let alone a videogame character without the ability to climb with his hands. The last and most difficult issue to overcome is the spoken dialogue. Every character in the game speaks as though they have no need of breath, are aware of no punctuation, and are wired on crank. It's impossible for QA testers to overlook, easy to fix, and an absolute shame that it happened, because the story in this game is phenomenal.

From the first moment in country, you're pulled into this story, this world. Refugees are desperate, the mercenaries are merciless, and the factions are ready to tear the country apart in their search for power. The Jackal? He's the ghost in the machine, showing up, spouting vaguely Nihilist Nietzchean platitudes and disappearing into the night. Reuben is a journalist caught in the mix you asks you to find the tapes of his interview with the Jackal, tapes that reveal a deeply drawn character with surprisingly…I won't say anti-war views, but incredibly nuanced opinions about the nature of conflict. All of this, this whole tangled web, is not derailed by the speed-talking, but it is betrayed in a way. The dialogue goes by without much of an opportunity for the player to appreciate the plot. 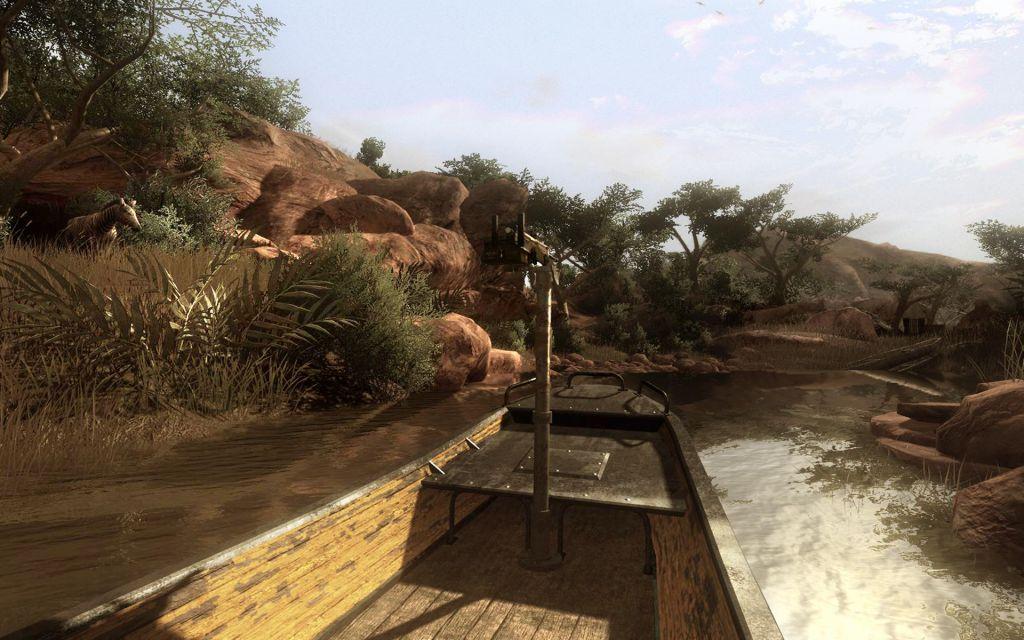 While the voice-acting may stumble, the game's much vaunted Dunia (Swahili for "Earth") engine handles the game's fire effects incredibly well; fire spreads in the direction the wind blows, and can set alight any surface in the game that is realistically burnable. You can shoot down bush and branches and then watch them grow back, the character models are as life-like as any you'll see in this console generation, but the most striking moment for me, graphically, was just watching the sunlight filter through the leaves on a tree, glittering just as it would in a real sunset. Maybe it's been done in other games, but in this instance, with this confluence of graphical achievements, I feel like this game is a preview of what is to come.

With regards to multiplayer, the game features the fairly standard categories of capture the flag (diamond case), deathmatch and team deathmatch, and it's as fun as anything else. It's not a dissatisfying experience, but I have a criticism of Ubisoft: I understand the graphical limitations on split-screen co-op, but this game screams-begs-cries for online co-op. The tactical possibilities with two players in this game are endless, and it was a consistent disappointment for me that I couldn't share the experience with a friend.

All in all, FC2 is well-worth a purchase. I finished it and was immediately set for another go-round. In Ubisoft's Africa, you'll find a shooter that's deep, detailed, and never lets up on the pace. In real-world Africa, tribes used to send messages via drumbeat; listen closely to the sounds of FC2. I'm willing to bet they're playing your tune.
Far Cry 2 is a fantastic game:. The gameplay's great, the environmental execution is near-flawless, but a couple glaring mistakes keep it just shy of perfect.