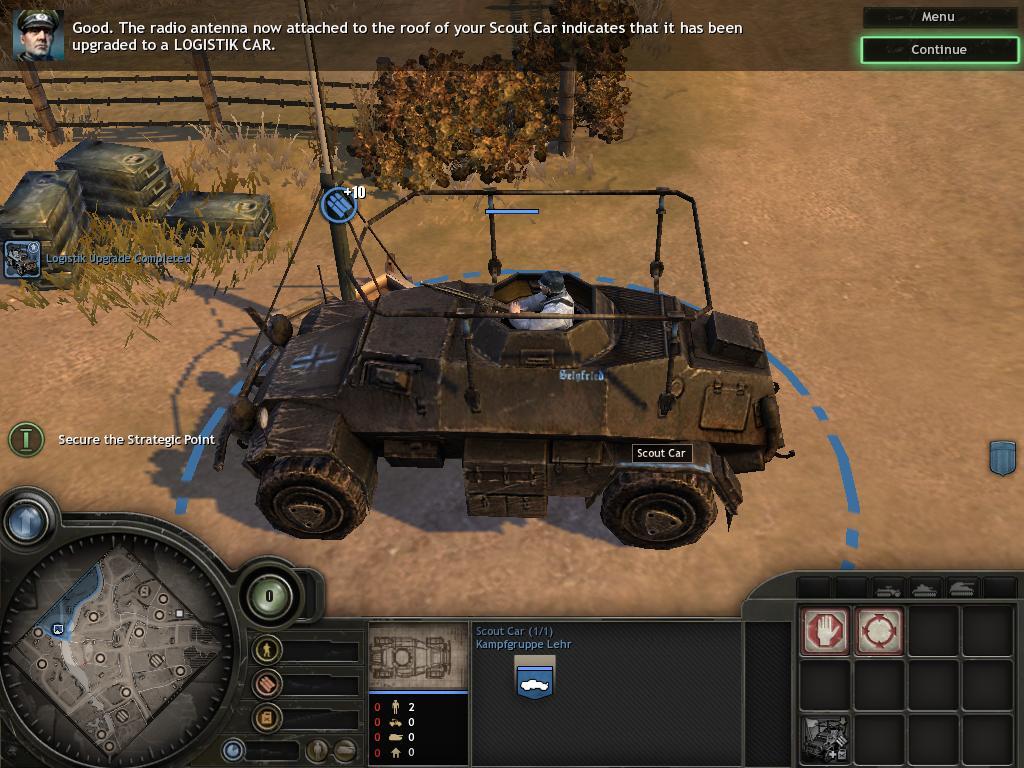 Written by Dave Gamble on 1/28/2008 for PC
More On: Company of Heroes: Opposing Fronts
I'm sure a lot of people wondered “What's that supposed to mean??” the first time they heard the US Army's “Army of One” tag line, but anyone that has played Call of Duty will know exactly what it means. “Johnson! Take out that machine gun!” “Johnson! Grab that Panzerfaust and stop those tanks!” “Johnson! We'll wait here while you clear out that bunker, find the secret documents, learn to read German and decrypt them, fashion a rudimentary radio out of shell casings and a coffee can, and call in artillery.” One could certainly be forgiven for thinking the burden of the entire Allied effort had been placed on one pair of shoulders, while the Sergeants, Captains, and Generals just stood by and watched. Well, if you've ever spent any time hunkered down in a virtual fox hole dreaming about the day you could shake off the mud and take a leadership role, your time has come with Company of Heroes: Opposing Fronts, a stand alone expansion (isn't that the same as saying sequel?) to the original Company of Heroes. Be careful, though, because things are not always what they seem. It night not be quite as easy as you assume to step into the boots of the guy that has to make the decisions.

The original Company of Heroes was reviewed by the lovely and talented John here,  so I won't spend a lot of time rehashing his observations. The basic game play is unchanged, so John's descriptions will apply equally to Opposing Fronts. The difference in Opposing Fronts is in the armies that you will be associated with.

On the one side, you will be able to play as a member of the British 2nd Army (the 1st apparently never having recovered from its pwning in the Revolutionary War of 1775 – 1783) in a primarily offensive role fought for the umpteenth time over war-torn northern France in the summer of 1944. You will be fighting to gain control over the city of Caen (again!), but this time you will be calling the shots, so to speak.

On the other side, you will be leading a defensive battle as a member of the elite German Panzer Kampfgruppe, which loosely translates to “whatever collection of troops, trucks, tanks, and artillery pieces happen to be available.” Make no mistake, though: even as an ad-hoc collection of various components, or perhaps even because of the inherent flexibility of such a non-rigid structure, these groups were wildly effective. You will be defending against the Allied airborne assault of the Netherlands in Operation Market Garden. Students of history will recognize that assault as having eventually failing to attain its goals, but will also note that it was a hard fought battle for both sides. Interestingly, the ultimate failure of Market Garden is considered to be the result of the British 1st Airborne's failure to secure the bridge at Arnhem. In any event, you will enter this campaign with history on your side, but that and $3 Euros will buy you a Skinny Latte in Caen. You're still going to have to work to win it.

The excellent tutorial from the original Company of Heroes is also included in Opposing Fronts, but is enhanced with two more tutorials to show you the different elements that come in when playing on the British or German side. With the British, you will naturally to adjust to things like their insistence on pronouncing words with letters that aren't in the word (aluminum = “al-you-min-ee-um”, lieutenant = “left-tenant”, etc.) and their dry sense of humor (“military intelligence assures us that Jerry won't put up much of a fight, but we know that means he'll be up our arse like Sir Michael Moore after a doughnut, what?”) in addition to a slightly different unit composition. The basic infantry squad is five soldiers, but a leff-tenant can be attached to bring additional skills (“You, soldier! Extend that that pinky when sipping tea, you blighter!”) to the unit. The British also have a more mobile command structure in that they use trucks for command posts, which is helpful when you're fighting a (hopefully) advancing battle. You will also have the services of Sappers, who can build defensive structures such as slit trenches (careful with putting too much faith in these: Jerry's incendiary mortars can make these mighty hot!) and gun emplacements to secure territory you're taken, and repair things that get damaged in the heat of battle like the bridges you will need to cross as you move your troops forward. My favorite British capability by far, though, was the massive artillery guns. There's just something to be said for being able to reach out and touch someone with a 25 pound (weight, not currency) Howitzer! Even cooler was something called the Creeping Barrage, which allowed me to define a line of destruction across an area. Those were a blast! (pun intended)

The Germans are even more mobile, and the organization they use is somewhat akin to a calvary unit. With this degree of mobility, the German side can cover a lot of territory very quickly and not as much attention is focused on defense. Troops are mounted in half tracks, so they can reach new battlefields right quickly, and with their ability to shoot at enemies while mounted in the half tracks, do amazing amounts of damage when they get there. Half tracks can also support mortar units, so fighting entrenched opposing forces can get pretty interesting from a pyrotechnic point of view. The mortars are very slow to load, though, so you have to keep an ammunition half track close by, thus increasing the logistical burden of keeping these units advancing. Scout Cars are quick little mobile units that can be used to capture and secure territory and strategic points, and as you can imagine, there are tanks available as well. The Luftwaffe is also available at times to provide air-to-ground cover with Henschel Hs 129 Panzerknackers for those situations that call for a more robust anti-tank capability that can be provided by ground troops. Playing on the German side is interesting in that it allows for a multi-pronged, blisteringly fast attack strategy, but it requires a lot of attention to detail to remember where every unit is and where it needs to be next. Speed exacts another cost, too, in that the units are fairly lightly armored and as such are not particularly good in defensive roles.

So, can the war-weary soldier that thinks the role of leader might be a better deal than being the 'One' referred to in the Army slogan make the leap from the foxhole to the command post? Well, that depends. In my personal experience, it seems that some people, myself clearly included, are simply born to the role of follower. In the early skirmishes, I could win more or less just by throwing troops at whatever problems cropped up. As the following battles became increasingly more difficult and the pace of events quickened, I soon learned that the appropriate response to a frantic call of “We're taking fire!” is not “Sucks to be you, doesn't it?” In other words, the game can become overwhelming very quickly. The squads are pretty good at looking out for themselves when it comes to finding cover and someone to shoot at, but their staunch loyalty to King or Fuhrer could become frustrating. Pinned down and outnumbered, they'd stand their ground to the last troop if I couldn't get to them in time to order a retreat. And really, if you have a grenade and the need to use it, I trust your judgment; don't wait for me to give the order.

Company of Heroes: Opposing Forces provides tremendous depth in a visually appealing package, and the game play is every bit as exciting as being down in the trenches pulling the trigger. It also offers a great perspective of the many facets included in any given battle, and the challenges of managing the resources and tactics of a large unit. It throws a lot of the player quickly, though, so those without a lot of experience in the RTS genre may feel that they've gotten in way over their heads. At times it requires quick thinking, but beyond that it can also demand a sharp memory to be able to keep track of the multiple tactical battles that will be going on simultaneously. This is probably a side effect of the mobility of the British and German forces as it will often be the case that a slower player (like me) will still be directing units to a battle that has already moved elsewhere.
Opposing Forces puts the player in a position of decision making and responsibility, but still offers up the visual and auditory aspects of down-in-the-trenches fighting. It rewards quick thinking and attention to detail, and punishes those that possess neither, pretty much as it should be.