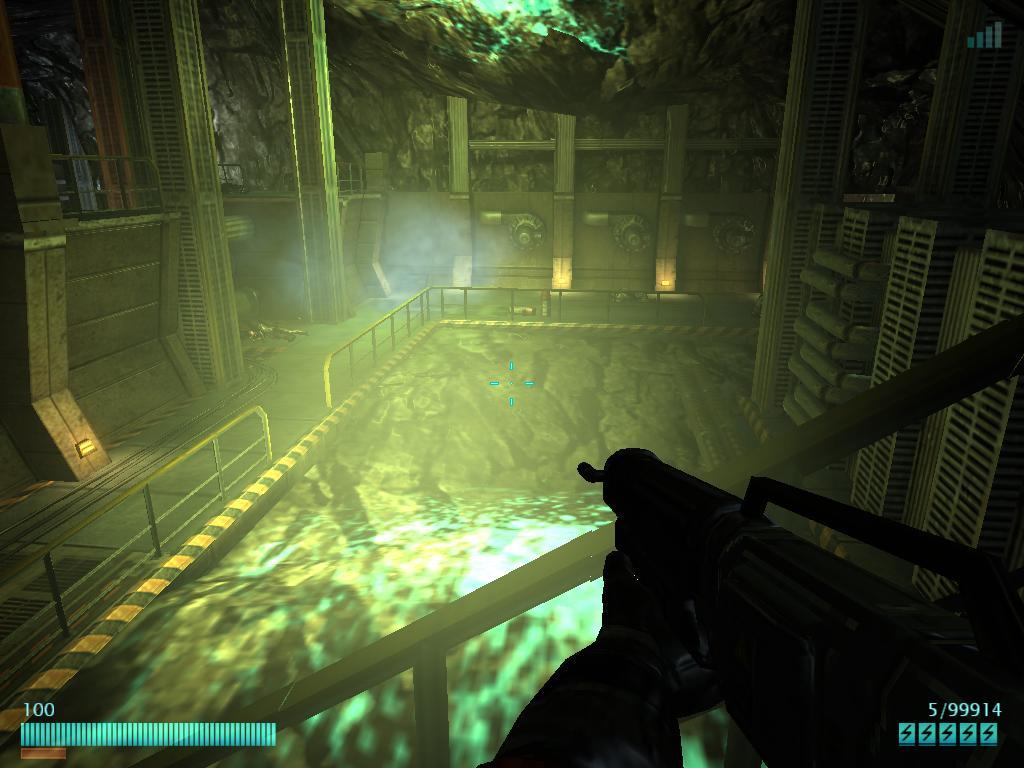 Written by Dave Gamble on 11/19/2007 for PC
More On: Alpha Prime
“Don't puke on my boots.” Whaaa? I don't usually pay all that much attention to the story line of your typical Sci-Fi shooter, much preferring to get right into the actual, you know, shooting. That line, coming very early in the dialog on Black Element's Alpha Prime caught my attention, though. I thought that maybe just this once I might consider actually following the story, and as it turns out, I'm glad I did. Granted, at times it felt like a mega-case of deja vu, what with the corrupt security guards and the maniacal, deadly robots, all in the employ of the evil mega-corporation du jour, joined in the task of wiping away all traces of inconvenient witnesses to their perfidious shenanigans on the asteroid mine of Alpha Prime. In other words, me and a couple of my friends. Wow, who saw that coming? But... just because a story is familiar doesn't mean it can't be entertaining, and there's always the possibility of unexpected twists and turns in the plot, a promise that Alpha Prime delivers on right up to the very end. At times the voice acting seemed somewhat stilted and tended to go on a little longer than my patience allowed for, but even a mediocre cast can be elevated by the addition of one enjoyable member, and in the case of me and Alpha Prime, that character was Paolo Bellini. I don't want to spoil anyone's fun, so that's all I'll say with regards to the story line, other than this little hint: be careful who you trust. Oh, and one more thing: it's a Scorcese-like dialog, so if you have sensitive ears in the auditory range of your desk, turn down the volume. The F-bombs are plentiful. In fact, I laughed out loud when one character said to another that “Ass is needlessly vulgar.” I mean, really, if that isn't the pot calling the kettle black, I don't know what is! “Ass” was probably the least vulgar word in the entire dialog!

What might spoil your fun, however, is the enormous horsepower Alpha Prime requires from your PC to maintain even an adequate frame rate. I understand that my older PC isn't state-of-the-art but in its defense, it was able to deliver a serviceable frame rate for the Call of Duty 4 demo, so the GeForce 7800 should have been sufficient for the demands of Alpha Prime, but it wasn't. In fact, it wasn't even close. It performed fine right up until the time when it was needed most, which was, of course, when the shooting started. Once the bullets started flying, I was thrown into a Matrix-like unintentional bullet time of about one frame per second. This doesn't work as well as you might think when you consider that it wasn't just the enemies that were slowed down, but me as well. It was so bad that I had to invent a brand new acronym to describe it: DBFR, or Death By Frame Rate. It made the game nearly unplayable, and often was the occasion where the only way of proceeding was to make use of cheat codes. While this is a disqualifier for players who own anything but the latest fire breathing game machines, it is a testament to the quality of the story that I kept playing all the way through. For those that do have the hardware to support the graphics demands, the pay-off is there in the form of a very detailed and intriguing environment, albeit one that is primarily limited to indoor, industrial settings.

The game play is similar to most WDWO (What Door Will Open) shooters, although the interactivity of the world gave off just a hint of the rich and compelling environment of Half-Life 2. Many of the objects lying around can be picked up and thrown, but there's no real reason to do so. Things can be piled on top of other things, which comes in handyin a small number of scenarios, but the logistical puzzles are pretty straightforward to solve and really not much of a challenge. I was stuck for an hour or so at one point, but a non-intuitive use of a weapon finally got me going again. You do have a pretty nifty gadget called a ReCon at your disposal that can be used to hack into little forklift-like vehicles called Loaders, closed circuit cameras, and electronically locked doors, so keep that in mind when you're presented with what seem like dead end situations and you'll be fine.

The AI of the enemies is average in that they won't all just stand there and fight, but some of them actually do exactly that after a brief period of running away. Others find cover and pop up to make a shot and duck back down, and all of them respond to the proximity of a grenade. What they don't do is exhibit any kind of squad or team tactics, but I guess that's probably a good thing since the numbers would be overwhelming. As it is, ammunition management turned out to be somewhat of a zero sum game. By that I don't mean that I was always hovering near zero ammo and wished I had some more, mind you. What I mean is that it usually took just as many rounds to kill an enemy as I could recover from its dead carcass. And those enemies that ran away? Well, they had a very annoying trait: as they ran away, they would shoot at me by holding their guns over their shoulders and aimlessly spray what I considered to be my ammo in a very wasteful way.

Ammo management wasn't the only issue. During certain phases of the trek around the asteroid, there was also a distinct lack of oxygen and it was of critical importance to make an expedient path to a wall mounted oxygen tank. To compound the problem, it was often the case that there was a gun battle to be won at the same time. Low on ammo, low on air, and high on opposing enemies is really not the optimal situation, believe me! All in the average day's work for a space ranger, I'm sure, but quite the stressful event for a guy like me. Even without the opposing forces delaying your progress towards the life-sustaining inert gas, there was often the issue of simply finding you way to it. It seems that there aren't always a lot of easily identifiable landmarks on the surface of an asteroid. This, I'm here to tell you, can be frustrating.

The weapons themselves were pretty run-of-the-mill, with the normal mix ranging from a nearly useless hatchet all the way up to a rocket launcher. The enemies had pretty much the same kit, which is useful when it comes to finding replacement ammo, but they also had a few nifty little autonomous traps that they could spring on an unsuspecting protagonist. You'll want to watch out for those.

When I could shake the feeling that I had been through all of this before in one place or another, Alpha Prime was a pretty good ride, considering that there was nothing particularly new or innovative about it. It's a shame that I couldn't fully experience the graphical environment in the way that it was intended due to its insane thirst for PC horsepower, but if you have the equipment for it and are looking for a budget-priced sci-fi shooter (although I'm forced to wonder just who it is that can afford a state-of-the-art game machine, but scrimps on the cost of games), Alpha Prime will fit the bill.
The hardware demands are extreme, but if your machine can provide the required horsepower, Alpha Prime offers a pretty decent single player experience in return.