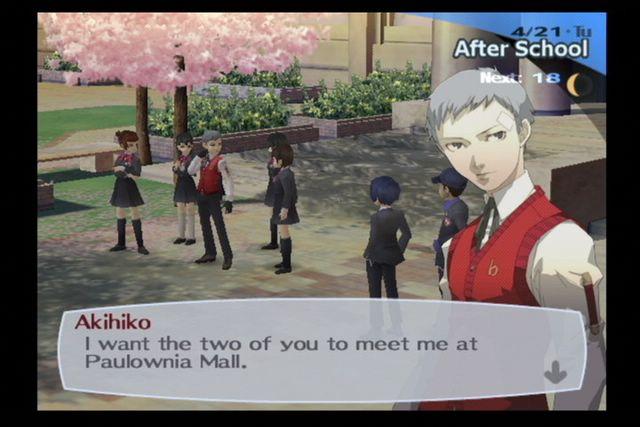 Those crazy kids at Atlus, they like to surprise. First there was Odin Sphere back in April and before the summer could end they hit us with Persona 3, a stunning title that is quite possibly THE total package for RPG fans. You’ve got strong character development, an awesome story, stylized graphics, a funky soundtrack, rock-solid presentation and some of the best written dialogue in ages. Since I’m known around here for being the hardcore Japanese RPG fanatic and such I still don’t feel like I’m reaching with this score that I am handing out because the game is really a well made piece of interactive entertainment that you would be a fool to miss out on. It’s got a few foibles here and there, but that’s not stopping me from going to the local brick and mortar game shop to buy a second copy right now, provided they aren’t sold out.

One of the immediate driving forces behind Persona 3 is the factor of time. A lot of people seem to fail to realize that in your quest to make the ultimate bad-ass character, you are given infinite time. You’re right at the final boss; the world is about to end, but you’re about to get revenge on him for killing your whole family, everyone is counting in you… oh wait you need to go level up a bit. It sounds silly when you really think about it, and Persona 3 does away with it.

In this game, time is finite, days go by, and how you whittle them away will play heavily on how you experience Persona 3. You could do a myriad of things with the time given to you, and it all leads to something, whether it is a branch in the expansive story or developing your character’s stats. You really do get what you give in terms of how you spend your time. To put it in perspective on how large the game is, it takes places over a school year according to Japan’s educational system. The game starts in April, and ends in January. By July, I had logged over thirty hours of game time.

So what exactly are some of the things you can do in Persona 3? The list is surprisingly simple, but when you combine them in to a daily routine, you kind of liken it to the Sims only with a hell of a lot more control. You play the role of an unnamed silent protagonist high school student. You are attending Gekkoukan High School where everything appears fine and dandy, until you arrive at your dorm and find that some of the students hide a secret. During the night, there is a twenty-fifth hour, called the Dark Hour. These students are able to exist in the Dark Hour while other humans cannot. While there they are able to summon Persona, a manifestation of inner power that allows them to defeat monsters that come forth during the Dark Hour.

One of the interesting and definitely controversial points of the Persona is how they are summoned. Of course there is the typical ‘call forth’ type of dialogue, but the students all hold an ‘evoker’ that looks like a gun. Put the gun to your head, and pull the trigger, simple as that. These monsters that you combat with the Persona are responsible for wreaking havoc on the town and it’s up to this group of students who call themselves SEES and their newest recruit (you) to find the source of, and destroy these “Shadows.” Coincidentally, the “Shadows” seem to reside in a tower called Tartarus, and during the normal time of day, it’s your school. There are quite a few interesting turns in the story too, and it all makes sense, in a mind bending sort of way.