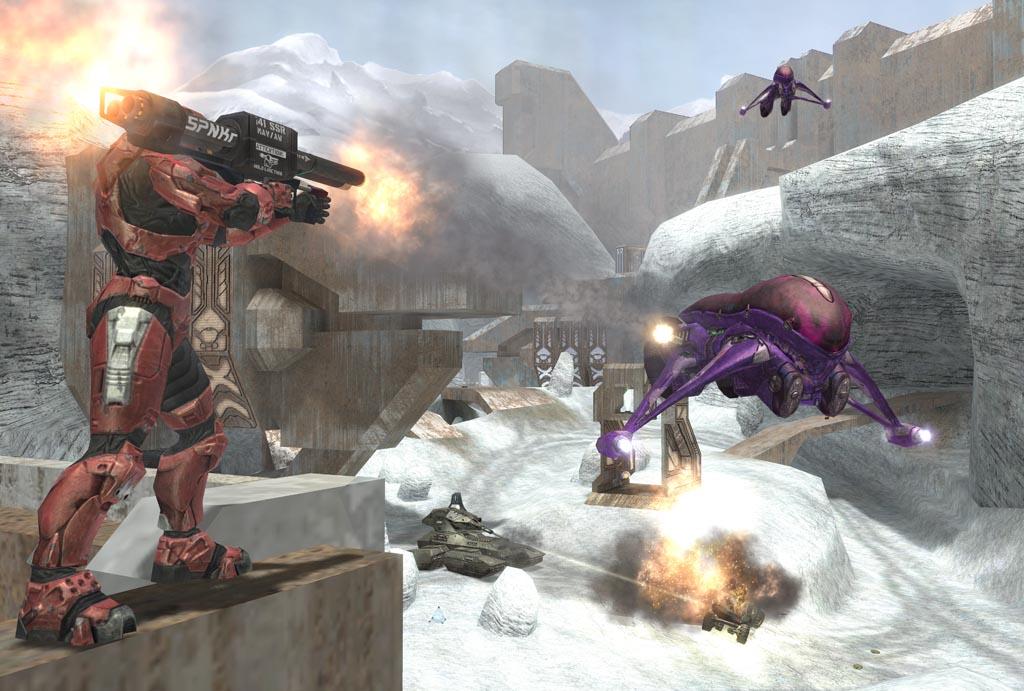 Written by Charles Husemann on 5/15/2007 for PC
More On: HALO 2
It was kind of an odd move for Microsoft to bring Halo 2 to the PC.  The first game did OK on the PC but given the number of high quality first person shooters available on the PC it was up against some stiff competition.  It was a slightly odder move to make a three and a half year old game a Vista exclusive.  The answer to both questions seems to be that Microsoft was looking to bring the best selling Xbox game to the PC and decided to use it as a test bed for a host of new technology (which is why it requires Vista).

The first new technology is Microsoft's new Tray and Play software which allows you to start playing the game as soon as you put the disc in the tray.  While you are playing it installs the rest of the game in the background.  The system works well in theory but I had issues with it because Halo 2 for Vista requires the PC version Xbox Live to be installed before you can play the game and since I didn't have it installed already I was held up a bit while it installed.  Given that Microsoft is delaying the release of the game to work on install issues I'm hoping this will be fixed in the final retail version of the game.  One nice feature of the game is that once you install and activate the game you no longer need to keep the disc in the drive.

The PC Live software is the other new piece of software that's being unveiled in Halo 2 Vista.  The integration allows you to log in Microsoft's Live gaming service and it's wealth of benefits like achievements, friends lists, messaging, and allows you to play games against against foul mouthed teenagers online.  Of course you have to upgrade to Microsoft's gold service in order to get the matchmaking and online play which costs $60 for a year of service.  Those who already own an existing Gold account on their Xbox 360 will be able to re-use it on the PC which is a nice touch.

The service does provide exactly the same great service that Microsoft has been providing Xbox users since 2002.  Of course most PC gamers have had access to tools like this for years through services like Xfire and Gamespy but it is nice to have a centralized service.  To bring up the Live service menu you just press the Home button and then go about your business.  The integration with Halo 2 is solid and it's very easy to setup multiplayer matches and check your achievements.

Other than Tray and Play, Live Integration, and the included level builder the game is exactly the same game that players got on the console had. You et the same single player campaign and the same multiplayer experience.  That's not a bad thing, not by far as Halo 2 features a fantastic, engrossing single player campaign.  It's not overly long and should take most people between eight and ten hours to complete on the normal difficultly.  Of course once you complete the game on normal there are the Heroic and Legendary difficulty if you've got the time and inclination to play through it again.  Of course playing through it again doesn't make the cliff hanger ending any easier to take but it does a good job of setting up the third game which will be on shelves later this year.

The game has gotten a graphical update in the move to the PC but it still doesn't look as good as most PC FPS games.  Even compared with Half-Life 2(which released at the same time as the original Halo 2) the graphics are a bit lacking.  Even though the graphics aren't the best I did experience some frame rate drop on occasion.  I was running the game at 1680X1050 with all of the graphical options turned up but I was still curious as to why a nearly 3 year old game dropped frames when running on a GeForce 8800 GTS.  The slowdowns were few and far between but still a bit of a concern.

All of the great sounds from the Halo games are present.  Bungie has some of the best audio guys in the business and I'm happy to say that everything is as I remembered it.  Weapon sounds are meaty and insanely well done.  What's great about the weapons is that you can always tell who's fighting who just by listening to the battle from a distance.  The game's score is excellent but I really don't have to tell you that as the score has become iconic since the game's release and it's the only game soundtrack that I actually listen to on a regular basis.
Playing through the game again reminded about how refined the Halo 2 gameplay is.  The weapon and level design is about as good as it gets.   The pacing of the single player campaign is excellent and while I'm still not of the Flood levels (or the Flood in level) the game is still a lot of fun to play through.  I did get a chance to try the  Charlie Sinhaseni run by the Flood trick and it does seem to work for some areas of the game although not all of them.  I'm guessing a more skilled player could circumnavigate certain parts of the game but I'm not quite that good.

Of course the real meat of Halo 2 is the multiplayer action and the port contains all the goodness of it's predecessor.  I didn't really get a chance to play much multiplayer as the game hasn't been released to the public yet but I did play a few games against other press people who had received their copy early.  All the great things that made the console version are in the PC version, at least what I remember from the console version.  The Live features make it very easy to setup your own server and invite the people on your friends list to play.  The game comes with it's own dedicated server so you can setup your own personal server for you and your friends.  It's still a bit frustrating that you can't play the co-op mode with someone over the Live.  Hopefully that's something they will rectify in Halo 3 when it comes out later this year but I'm not holding my breath.

As good as the multiplayer is I'm not sure how well it's going to go over with the PC gaming crowd.  The first Halo didn't exactly light the world on fire and given that Halo 2 has to complete with Counterstrike: Source, the Battlefield games, and a host of other FPS games  I'm not sure that Halo 2 will as well.  It's a bit of a shame as Halo 2's multiplayer is actually solid once you get used to the controls.

You have a few options in how you manipulate Master Chief.  You can also use an Xbox 360 gamepad or the keyboard/mouse to control Master Chief but I'll take a keyboard/mouse combo over a controller any day of the week.  The game uses the standard WASD control to move and firing firing your main weapons is done with the left mouse button with the right mouse button throwing grenades or firing a dual wielded weapon.  Melee attacks are done by pressing the F button with R reloading, and Q switching between weapons and picking up dropping weapons on the ground.  The controls are fairly tight but it still feels a bit loose  to me, especially when jumping.

The only real glitch I experienced playing the game was an issue with one of my save games which lost my progress during the game and forced me to re-play a few levels of the game.  Hopefully that is something that will be corrected in the final version of the game or there are going to be a lot of upset gamers.  There were a few other minor clipping issues here and there but the game is still rock solid.

Halo 2 is still a great game but the age of the game is showing a bit.  The single player campaign is a lot of fun and it was fun to relive some of the key moments of the game (like taking down the scarab).  I also filled in a few holes that I missed the first time I played through the game on the Xbox.  Multiplayer is solid but it's really not in the same league as other PC FPS games and as someone who has a ton of hours logged into Battlefield 2142 16 players doesn't really sounds that enticing.  The game is an easy way to bag a few hundred easy gamerscore points and the new technologies the game uses are pretty cool but it does feel a bit hollow.  It's almost like watching an old music star trying to make a comeback with a few new songs and a bag full of hits.  That's not necessarily a bad thing but it's not overly fulfilling.
A solid game that shows off some of Microsoft's cool new PC gaming technologies while showing a lot of signs of age. If you've played the Xbox version you really aren't missing that much with the PC version. Probably worth checking out if you've never played the Xbox version.