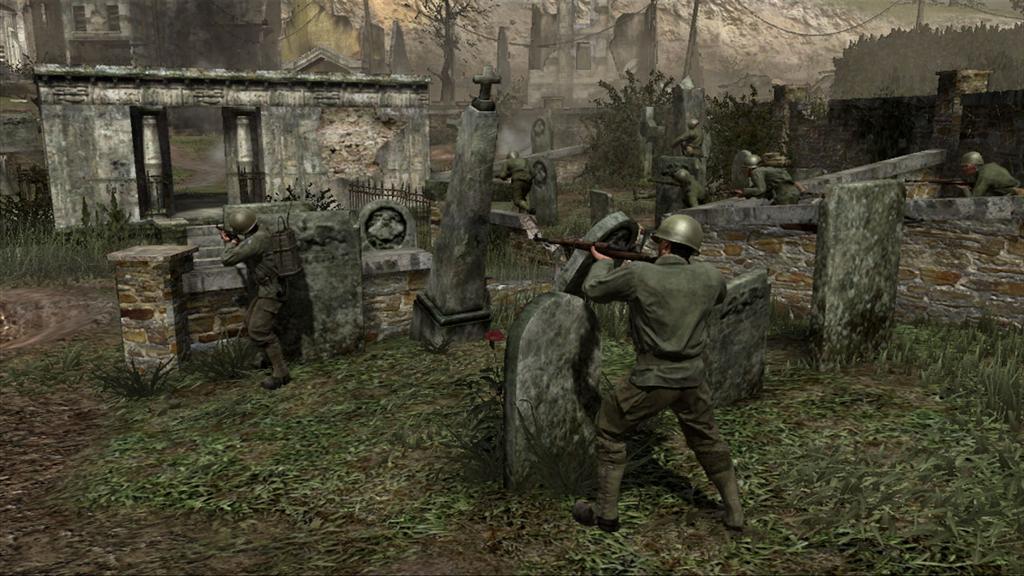 Written by The GN Staff on 11/7/2006 for PS3   Wii   360
More On: Call of Duty 3
If there's one series that's really been at the top of their game in the WWII FPS genre, it is Call of Duty. The third iteration is set to come out this week and we got to talk to the creative director of Call of Duty 3. From why the game's only coming to the console to talking a little about the Wii version, Richard Farrelly sheds some light on the game just before everyone can get their hands on it.

GamingNexus: Can you introduce yourself and describe your role on the project? How long have you been in the gaming industry and what drew you to your current position?
I am Richard Farrelly, Creative Director on Call of Duty 3. Besides working on three Call of Duty titles (Call if Duty: United Offensive, Call of Duty: Big Red One, Call of Duty 3), I was also on the team that made Return to Castle Wolfenstein and Kingpin: Life of Crime. I’ll let you count back and do the math…the numbers make me feel old.

GamingNexus: Why did you not produce a PC version this time around?
Richard Farrelly: We really wanted focus on delivering the Call of Duty experience to all next-gen consoles, this year.

GamingNexus: What was it like seeing the series featured in a hit show like the Office? Did you know about it in advance and do you think this will make the game even more popular?
Richard Farrelly: Everyone here got a kick out of it. It is great to see Call of Duty entering into popular culture. As far as its popularity I think Call of Duty 3 will take care of itself.

GamingNexus: The WWII FPS genre has been really popular over the last few years, is it getting harder to find new battles and story lines to follow?  Do you think it is possible to ever completely tap out the WWII game market?
Richard Farrelly: Absolutely not. There are so many battles and Nations that haven’t been mentioned or covered in any game. WWII lasted from 1939 to 1945. Take for instance, the addition of the Canadian and Polish armies to Call of Duty 3.

GamingNexus: What are some new features that sets this game apart from the other games in the genre?
Richard Farrelly: Our goal is to keep Call of Duty doing what is does best, and that is delivering a cinematically intense experience that puts the player in the fight. That said, we are always trying to find new ways to enrich the game. In Call of Duty 3 we have added what we call “Battle Actions”. These actions basically turn otherwise mundane “press X to do Y” tasks into more challenging button combinations or timing puzzles that make greater use of each platform’s console controller. These tasks can range from planting a charge to using a mortar to fighting an enemy soldier in close combat. We have also added first/third person drivable vehicles such as an assault jeep. For the first time in a Call of Duty title the player will be able to drive himself to an objective, accomplish it, and drive off to the next one.

GamingNexus: How well has it been implementing the Wii control scheme?  What was the hardest thing about coming up with the new set of controls?
Richard Farrelly: Our gameplay matched up very well with the Wii controls, especially when it comes to the battle actions. It really puts you into the game.

GamingNexus: Are there any other sacrifices that were needed to be made for the PS2 and Xbox version other than graphics?
Richard Farrelly: The only variable is processing power.  Due to the very scalable nature of our engine, we are able to offer the same game experience across all platforms.

GamingNexus: Which version are you most excited about? The Wii, 360, or PS3?
Richard Farrelly: I can honestly say that I have no favorite. Call of Duty 3 looks and plays great on all the platforms, and each has a unique flavor, given their controllers. I am very excited that we can share our game with so many more players.

GamingNexus: Are there any real differences between the PS3 and Xbox 360 versions?
Richard Farrelly: Our main goal was to create a solid and consistent game across all platforms. Once that was achieved we tailored the game individually, capitalizing on the strengths of each platform.

GamingNexus: What kind of things are you able to do with the next generation consoles that you couldn’t do in the past?   Where do you think the series goes from here?
Richard Farrelly: Next-Gen consoles have really opened a lot of doors. Aside from being able to put more of everything on screen, develop more immersive characters, storylines, and environments, and provide new player interactions with unique controllers, we now also  will have the opportunity to sustain our titles with more downloadable content and great online play as well.  As for where the series goes from here, stay tuned...

GamingNexus: You’ve added vehicles to the multiplayer modes, what kind of vehicles can we expect to see?  Will they be available in all of the multiplayer modes?  What kind of balance issues did the vehicles present and how did you handle them?
Richard Farrelly: We have added a variety of multi-occupancy vehicles to the game – Sherman tanks, motorcycles, all-terrain vehicles with mounted machine guns.  Each map and game mode will utilize different vehicles based on the style of gameplay for that map/game mode combination.  We have one map that is expansive and open in nature and is great for epic tank battles; we have another that is designed around long, narrow roads for zipping around in motorcycles.

Regarding the challenges faced with vehicle balance - every vehicle has a purpose in the game and has been balanced so that they serve that purpose effectively without becoming overpowering. Tanks are the ultimate defensive vehicle – if on-foot and confronted face-to-face with a tank, you will quickly find yourself in a deadly situation. However, tanks are slow-moving and vulnerable to attack from behind.  An enemy combatant can sneak up to the back of the tank, climb on top, and toss a grenade down the hatch to disable it and take out the driver inside.  The armor at the back and on the underbelly of the tank is also slightly weaker, creating an opportunity for an anti-armor soldier to destroy it with a Bazooka or Panzerschrek.  The all-terrain vehicles are like mobile machine guns – awesome for heavy-handed infiltration of an enemy base.  Their armor is lighter than a tank’s and can be taken out with a well-placed sticky grenade.  Motorcycles are the perfect fast getaway vehicle for hit-and-run flag captures – they have very light armor.  Each vehicle has been balanced for a variety of gameplay uses – the strategies are limitless.

GamingNexus: Are there any plans to release new content for the game after it’s released?
Richard Farrelly: Stay tuned

GamingNexus: Is there anything we missed that you think gamers are really going to dig?
Richard Farrelly: The one thing that wasn’t mentioned is the different way we are presenting the game. It is kind of like an old war movie where you get to play in the action scenes. We have done away with loading screens and now have highly cinematic sequences that advance the story streaming while the level loads. Level transitions feel very smooth.


We'd like to thank Richard for taking the time to answer our questions as well as Jon who finally relented to our constant pleas to do an interview with someone from the development team.