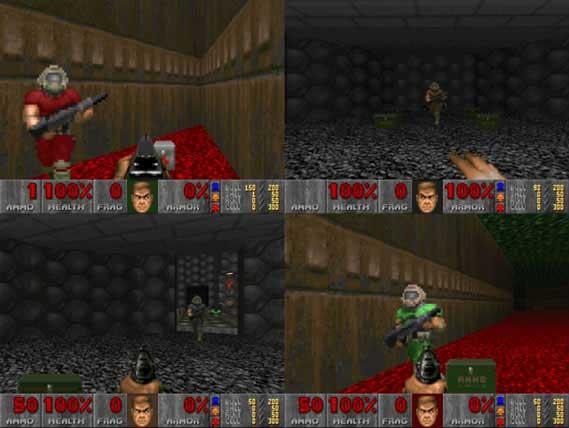 Written by John Yan on 10/20/2006 for 360
More On: DOOM
DOOM's got a nice little place in my heart as the first real online game to keep me up late nights with friends. I've played online games before on my Amiga but nothing like DOOM. When DOOM came out of nowhere and hit the Xbox Live Arcade, I was pretty excited at the possibility of reliving the great deathmatch action as well as playing cooperatively with friends. DOOM on the Xbox 360 is a nice port with some little annoyances but gives you all the great action that was so popular back in 1993.

DOOM is a pretty straight port of the game from the old days with some minor changes. There's a new soundtrack but I'm never one to play the game with the music. One of the better changes as the addition of 5.1 surround sound. When I played through the first few levels, I noticed it right away as I heard grunts and demons in my rear speakers. It also helps out a lot as you know where they are coming from so you can turn to that position quickly to dispatch them.

Everything you remembered about DOOM is there. From the fireballing Imps to the charging Pinky demons, the game is a nostalgic blast to the past. Yes it's missing some of the great elements that were introduced in DOOM 2 and if I had my choice I'd have released that game over the first one. (Although I can see this as a business decision in that they can release DOOM 2 later on for more money as well.) DOOM was the game to start the deathmatch craze and it is appropriate that this game is the first Xbox Live Arcade release for iD.

Four episodes are available in single player mode. You can play through each of the episodes on five different difficulty levels. This should give the novice gamers and the most seasoned ones the challenge that suites them. Each episode has nine levels and you'll experience 10 different types of enemies once you get through the entire game. Some of my favorites in the Baron of Hell and the Spider Demon become regulars in DOOM 2 but provide good boss characters for the marine to take down. The architecture, which was one of the aspects that set this game apart from others at the time, allow for different angled walls instead of the traditional 90 degree design and also featured different height levels. The engine won't allow rooms above rooms but the level designers did a good job of working within the limitations to produce some really nice levels.

Controlling the game with a joystick is actually pretty natural for me. I used to play DOOM all the time with a Gravis gamepad so using the gamepad for the 360 wasn't much of a change from the old days. Controls are responsive with the joysticks controlling both movement and rotation. One button cycles through your weapons one way while another does the opposite direction. Some gamers will miss the ability to instantly switch to a particular weapon via a number key though. Left trigger will make you run while the right trigger fires your weapon. Mouse and keyboard gamers will miss the setup but the Xbox 360 gamepad does an admirable job. Since there isn't any vertical aim required, the simplistic controls work quite well.

Online is where it's at and DOOM succeeds immensely here when you have the right people connected. I was easily able to jump into an online cooperative game and take out some demons with some Live folks. Up to four players are supported for both deathmatch and cooperative play. My experience wasn't bad with a few instances where the lag became unplayable. The action with three others provided some great demon hunting moments though when things where clicking. When you have three others with good pings, you get some smooth gameplay and I felt like I was back in college shooting demons in the computer labs. You will get some lag that hamper gameplay if one person's connection isn't up to speed and this is where some improvements need to be made. If someone's connection isn't up to snuff, be prepared to see the Xbox 360 network error icon in the upper right corner a lot or experience a lot of lagging as you are fighting off demons. On some matches it wasn't too bad and you could play through it but you will run into few occassions where it's just unbearable. Before you start the game, it's easy to check everyone's connection so you can be sure you're playing with people that won't slow you down. Lag though, for a very old game like DOOM where the amount of traffic isn't that much, shouldn't happen in the first place. Thirteen years later we shouldn't be experiencing lag when 28.8 baud modems allowed for smooth gameplay with four people back in the day.

Multiplayer isn't confined to online as up to four people can play via splitscreen. It greatly helps if you have a large TV to do this on but the option is there if you have a few friends sitting around and want to do a co-op or deathmatch game. While it's great to have the option, I had the most fun playing online.

There aren't many options when setting up co-op or deathmatch games. In co-op games, you're stuck with friendly fire on which can get quite annoying with inexperienced players. Besides walking into lines of fire, you'll have a few itchy trigger finger squadmates that will shoot at anything. There were plenty of times I would walk around a corner only to have a shotgun to my face. A few more options to adjust the game would've been welcomed so here's hoping that another patch or two will come out to address ths.

As with all other Xbox Live Arcade games, DOOM features some achievements as well as ranked matches. The achievements range from easy (complete any level) to downright impossible (complete all levels on ultra-violent). You should be able to get most of them pretty easily however.

An issue with the port is if you have a widescreen TV you're going to be subjected to the black bars on either side. You can change the screen size but you can't change the aspect so you can make the square bigger or smaller but that's about it. While a minor annoyance, some code to make it work on widescreen TVs should've been in place.

There aren't very many options when changing controls either. One that I really wish was included was the ability to change the sensitivity of the analog sticks. I like to quickly turn and it's pretty essential in Deathmatches but there was no way change how fast the sticks reacted. The only way to really spin around fast is to hold the run button but I would've liked to have more control over how sensitive the analog sticks were.

These few quirks can all be remedied with a patch and in fact, there was a patch the first day I logged in to fix some online issues. I hope Microsoft and Nerve Software works in a few more changes to really make DOOM a great addition to Xbox Live Arcade. I had a ton of fun fighting alongside and against the online community. If you grew up with DOOM, then this is a great pickup to experience your past. Now since DOOM is out, give me what I really want and that's Heretic and Hexen!
When it's on, it's damn fun. Single player is ok but playing co-op with three others is a blast.. when the lag is minimized.