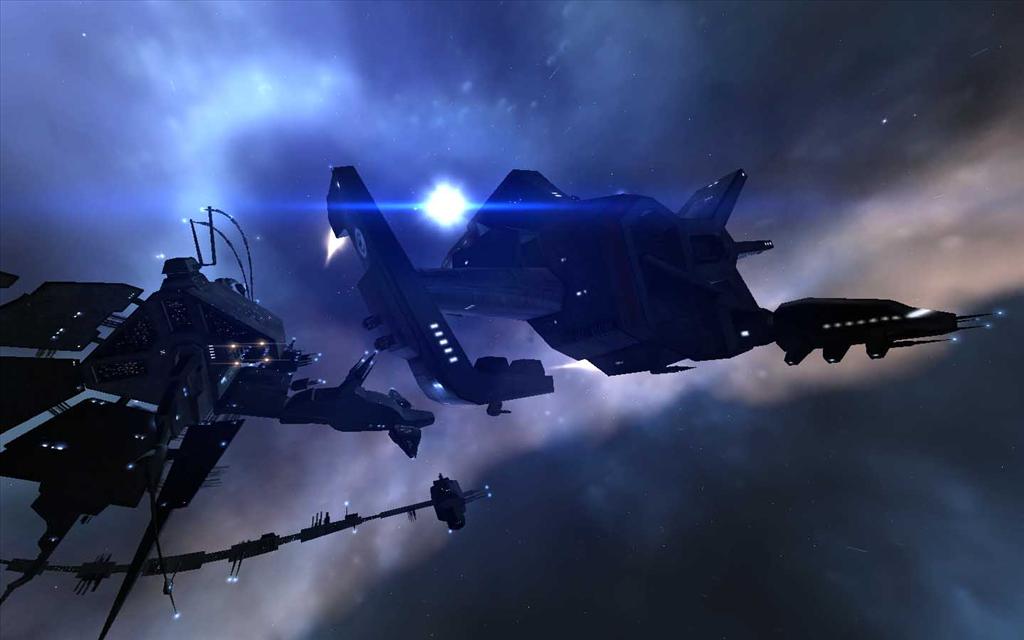 Written by Randy Kalista on 9/19/2006 for PC
More On: EVE Online
2006.09.09 23:52
Dear Sever: Thank you for your interest in the Card Sharks. Please review the offer that we have sent you and let us know what you think.
Yours,
Anthony Ebon
King of Spades
The Card Sharks
Joining a guild is a socially-gratifying milestone in any massively-multiplayer game. And being approached by a corporate headhunter for the Card Sharks (not their real name) is the very tasty icing on a very gratifying first week in the EVE Online universe.
The universe’s tension level is quartered between four strands of the human race, fluxing between boiling and freezing beneath fluctuating conditions of open and cold warfare. But enemy lines aren’t as clearly delineated as “orcs vs. humans” or any other elementary black and white distinctions. Ideologies and loyalties are drawn in the sand, open borders allow pirates and privateers alike to soar across invisible socio-political boundaries, and the only-slightly regulated PvP tucks in 800-thread count bedsheets of eminent danger over the entire galaxy. Sleep tight.
This MMO, like all MMOs, opens on the character creation screen. Four races beckon your $14.95 a month: The holy crusading Amarr Empire, the rebellious underdog Minmatar Republic, the freedom flag-waving Gallente Federation, and the strictly-business Caldari State. Contingent upon your choice, three separate bloodlines further comprise each race.
On the character creation screen, ability scores are firmly established (with slight variations marking each race) and character portraits grin or grimace with a player’s telltale intentions and aspirations as a “good” or “bad” guy. Your character portrait is frozen in time after you hit the Go button. Slid into the upper-left section of the user interface is your lovely mug staring back at you for the remainder of your time in EVE. You will never leave your ship for a stroll along the promenade since -- and there are game-enhancing scientific papers written on this -- you’re a “pod capsuleer” with hoses and implants affixed to your embryonic fluid-floating body (a la the Matrix) inside of your active ship. Your inert photo is decidedly cold and impersonal. Much like space.
Conforming to the cold, calculating mood I was in, I opted for the Caldari, a state built upon the ice cube ethics of corporate capitalism and rocksteady soldier codes. Of the three Caldari bloodlines I select the Asian-themed and scientifically specializing Achura, trying not to pronounce it ACK-yoo-ruh, like the car (Acura).
Choosing an occupation on the last screen from broad-based fields like ‘fighter’ and ‘miner’ (but also delving into less immediately obvious titles like ‘manager’ and ‘commander’) invests more skill points into certain areas from the beginning, and you’ll only be made aware of those point investments after you initialize your character. (A ‘custom’ career is the default setting, so again, there’s no need to get one-tracked in your profession.
It pays off well to visit EVE’s website and give a healthy perusal to its character generation manual. There’s a lot (a lot) to learn. This isn’t a learning curve: it’s a learning ramp. Which, in a sadistic sense, is a huge portion of EVE’s allure. It’s a big, beautiful sandbox, with a big, beautiful set of tools for you to begin the arduous and rewarding task of handcrafting your very own piece of the galaxy. But it all begins where it begins….
I may have chosen a science-proficient bloodline, but I’m here to blow things up, let’s not kid ourselves. To tame my mercenary taste buds I select the fighter occupation, and soon I’m hovering in a bejeweled Easter egg floating in the middle of a sharp-edged Caldari space station.
Needless to say: I’m confused.
But a feminine British accent is culling me into a tutorial, which should certainly clarify a few things. Little do I know that this is about to become the longest (and one of the best constructed) tutorials ever written for a space simulator game. I listen to the voice eagerly.
The simulator genre is notorious for possessing deep, hard-to-peel-away layers (upon layers) of static menus. If most space games are any indication, then the future isn’t fast and sleek: it’s sluggish and bogged down in Excel spreadsheet columns of options only a certified public accountant could love. And, being strictly honest, EVE certainly has those CPA-certified levels if you’re the right player to dig that deep (anyone recall what a “Donchian Channel” is from their economics courses?). But the clean presentation, along with sensible icons for the verbally-phobic, makes the process as painless as possible -- but it’s still going to hurt a little.
This isn’t a game where people hit the level-cap in three weeks and sit around with nothing to do. EVE’s brilliant training program ensures that a player makes constant skill progress (even offline -- offline!) on a time-investment system. More on that later. But -- barring none -- this is easily the most satisfying skill-building structure I’ve encountered in an MMO. It’s far removed from what any other MMO has implemented before.
By the time the tutorial is through with me, I’ve received cursory experience dealing with agents, completing kill and courier missions, mining, trading, and skill training. The interface is unfolding one glowing tab at a time, and the universe is unfolding one Kodak-moment at a time. Stunning, really.
Next week: Corporate life! Player pirates! System crashes!