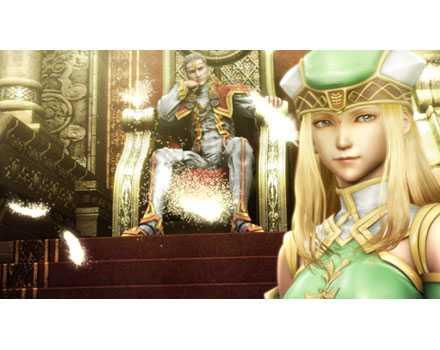 Written by Matt Mirkovich on 8/9/2006 for PSP
More On: Valkyrie Profile: Lenneth
Valkyrie Profile has always held a special place in my heart. It took a friend to turn me on to it in the first place, but once he did, I was sold, now and forever. In fact I’ve stated numerous times that if Valkyrie Profile or Suikoden made it to the PSP I would buy one. Sadly those days have arrived and I now own a Sony brand brick. But that’s not to say I don’t enjoy being able to play Valkyrie Profile on the go, in fact it’s great to be able to play this game whenever I get the itch. If you’ve got a PSP and are seeking a quality RPG then look no further. There’s a great story to be told, a fun battle engine, and some new, quality CG scenes and aside from some port issues that we’ll discuss later, this really is a must have in the PSP library.

The Gods of Norse mythology are locked in battle with each other in what is fated to be the end of the world, known as Ragnarok. In order to secure victory, the All-Father Odin has called upon Lenneth, a Valkyrie who is to harvest souls for the Aesir army. It sounds like a lot to swallow, and for the most part it is. This RPG has a roster running with about twenty or so characters. Each of them is on the verge of death and would make a fitting addition to the army of the gods. While a bit much for some characters to grasp you’ll find that all are willing to dedicate their lives to battle. Tri-Ace did a fairly good job of giving the characters a decent story that leads them to their eventual demise. There is also the underlying story of who Lenneth really is and what her role as a Valkyrie means to the gods. Have fun trying to uncover the mystery as that is a good part of the fun.

The graphics of Valkyrie Profile are of a simplistic 2-D nature, with a splash of 3-D thrown in every here and there. Character sprites look less sharp than in the PS1 version of this game, though I would believe that is due to the PSP screen and a poor conversion. This is especially obvious during spots where the camera zooms in on the playing field, which is quite frequently, and it results in very blurry visuals. Thankfully absent are a lot of the frame rate issues that were present in the PS1 release. The inclusion of new CG cut scenes to accentuate the story can really pull you out of the game but they are greatly appreciated. For what it’s worth though this is a nice game to look at. Sound wise, this sounds like a Tri-Ace game, which if you’ve played Star Ocean 2, or even Star Ocean 3 then you’ll know it means synthesized guitar for dungeons and an overall forgettable soundtrack. Also if you’ve played the PS1 version of this game then you’ll remember the voice acting, and not as a . The voice acting remains unchanged and is the cast of Pokemon, which recycles a lot of people. One actress has the role of four characters, so don’t be too surprised when you hear people that sound the same.

When out and about training members of the Einherjar (The members to join the Aesir army) the game takes a 2-D approach and will have you running across planes and doing the very general platforming deal along with a few puzzles that are not of much difficulty. While exploring, Lenneth has the ability to freeze enemies to use them as platforms or just to hold them in place while you take on other enemies. Lenneth can also create temporary platforms to serve as a foothold which is an invaluable skill when treasure hunting as it’s the only way to reach some out of the way items.

Combat is initiated through the swing of Lenneth’s sword. Once battle has started each character in the party is mapped to a face button. Standard fighters can attack up to three times, depending on the weapon in hand. Or you have a magic user who can target individual enemies or a group depending on the spell. Each character can attack at any time, and figuring out combos is half the fun. In order to outfit the Einherjar, you must craft weapons, either at a save point or out in the world map. There are no shops in the game so weapons and armor must be found or created. Weapons can also be modified in to other weapons, equipment or items, or can be broken down in to more materialization points to create new items.

There is also a great deal of effort that goes in to building the members of the Einherjar, for if their personal traits aren’t up to snuff, then they cannot be sent to Asgard. As the members of your party grow they must also mature and learn new skills, it’s a silly addition that really doesn’t seem to add much at first, but you’ll quickly see that raising a characters survival skill will be absolutely vital in the grand scheme of battle. You’ve also got to make sure they are properly equipped for the trip up, otherwise they won’t grow and rise in the ranks. It’s quite interesting to see how your little gods in training are doing as chapters go by.

Time is also of the essence in Valkyrie Profile, each action takes up time in the game, and Ragnarok is fast approaching. The game is divided in to eight chapters which are broken down in to periods. Checking for Einjerhar members and exploring dungeons and towns will eat away at your periods so manage your time well, though it really is difficult to tell if you are managing your time wisely. The difference between the good ending and the so-so ending is not much more than a few button presses. The trick is knowing when to time them. Which is also a slight peeve I have always had about this game, it’s a very exact process you have to go through to get the best ending. And to do even that you’ll have to play on Hard mode. Which to me was never all that hard to begin with. Though give this game a go on first or even Easy if you’re feeling overwhelmed. But be aware that you won’t get the full story or even the full roster of party members.

At the end of the day, you’ve got a fairly good port of a PS1 title with a few new bells and whistles which are greatly appreciated, but are left with a few old nagging issues. Save points are few and far between, I’ve already lost progress three times from having my PSP battery die out. The improvements made to make text more readable only accentuate how poorly the in game art was ported over. But the game play is still solid, the story is still enjoyable and I will continue to play this game year after year. It may not always be on this version of the game, but it will always be in my library. Now that this title has been released a lot more people don’t have to put their soul on eBay in exchange for a PS1 copy. Make sure you don’t miss it a second time around, and if anything, pick it up to prep yourself for the sequel that will be released on PS2 later this year.

At the end of the day, you’ve got a fairly good port of a PS1 title with a few new bells and whistles which are greatly appreciated, but are left with a few old nagging issues.