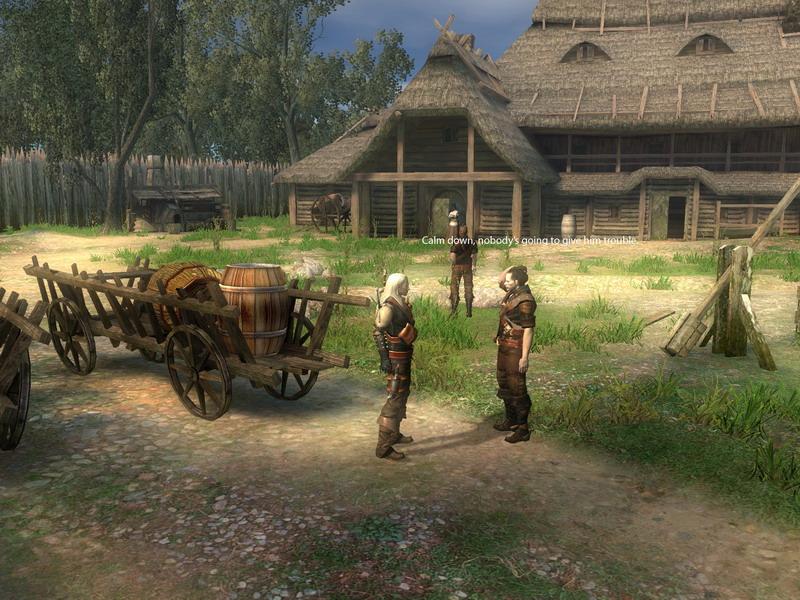 Written by Charles Husemann on 7/21/2006 for PC
More On: The Witcher
Every year at E3 there’s always one or two great games that somehow slip under the radar. Maybe they are tucked along the back wall of South Hall or nestled within the sleepy confines of Kentia but when you play the game you realize you’ve seen something new and cool. At this year’s show, The Witcher was one of those games. Up until that point we had seen some screenshots and read a little bit about the game but it really took seeing the game in action and reading a little further into the plot of the game to realize that CD Projekt had something special going. After begging for an interview we finally got a shot to send over a few questions and here’s what we got back.

Can you introduce yourself and discuss your role on the project? How long have you been in the gaming industry and how did you get into it in the first place?
My name is Michał Madej and I am the chief of the designers’ team at CD Projekt RED. My main responsibility is the coordination of work on different levels of the game, but I also work on constructing the story of the game as well as take care of the overall concept.

GamingNexus: First things, have you managed to land a publisher for the game yet?

Michał Madej: Not yet, but our talks are moving towards a successful resolution. Mind you, this is a very important decision, so on the one hand we strive to advance the process of securing a publisher, but on the other hand we don’t want to rush because choosing the right partner is a critical issue. Our goal is to find a company with which we can work together on a permanent basis; the company which will aim for active involvement in the process of building a great reputation for the game. Despite the fact that the game has a lot of positive buzz surrounding it, for the time being it is scheduled only for the PC-market release, which complicates the whole process even more. As a direct consequence, a few publishers need to be ruled out for a simple reason that for them multi-platform release is a necessary condition if they are expected to take interest in any project of this sort. Nonetheless, I am of the opinion that you can expect to hear the long-awaited announcement soon.

GamingNexus: Since the Witcher books have yet to reach the US, can you talk about the setting of the game and the background behind the world/character?

Michał Madej: The world of the Witcher is based on the novels and short stories of Andrzej Sapkowski, who created the world of fantasy following his own recipe – a very good one if we are to judge by his popularity in the countries where his works have been published. The phenomenon of the Witcher’s world is based on the fact that on the one hand it is classic fantasy writing with magic, different races, monsters and the like, but on the other hand a great number of elements existing in this world surprise us with their modern attitude and breeches of classic conventions. The most important of these is that there is no definite division of good and evil; just like in the real world, it all boils down to personal decisions and moral choices. In the times which the story depicts, most problems have their origins in the post-war chaos: damage inflicted upon the world results in poverty and waves of racism as people look for those guilty of their misery among the representatives of other races. The commercial routes are haunted by bands of thugs and mercenaries. The kings, in turn, are more focused on splitting the loot and politicking rather than looking into ordinary people’s problems. This, of course, comes as no surprise, as the post –war chaos is the right time for a lot of organisations and other powers to try and expand their area of influence. The witchers— among them the main hero, Geralt— find themselves drawn into a web of such intrigues.

GamingNexus: How involved was Andrzej Sapkowski with the development of the game?

Michał Madej: Andrzej Sapkowski, as a writer, is so engrossed in his new series of novels that he has decided to limit his contribution to other projects. Following the initial debates and after we have presented the script, he gave us the benefit of trust that we would come up with a good adaptation of his work.

GamingNexus: Is the game based on one of the books or are you just setting the game in the world of   the series?
Michał Madej: The story of the game takes place five years after the conclusion of the events from the book, and is supposed to be their continuation. An additional attraction for the gamers who have been acquainted with the witcher’s saga will be found in clear references to its content: you will recognise some of the characters, as well as follow-ups to some of the events. Simultaneously, the story of the game is constructed in such a way that any gamer—even one that is experiencing the witcher’s world for the first time—will easily get immersed in the story that unfolds in front of his eyes.

GamingNexus: The RPG market is getting a bit crowded as of late, what makes The Witcher different than all the other RPG’s on the market?

GamingNexus: The game is said to have three different endings, can we expect a dark, gray, and light kind of ending or will they be a little more complex than that?
Michał Madej: There will be no endings in “good”, “bad” or “neutral” style – absolutely not! This is not the type of game, and this is not the type of world. Decisions which need to be made are difficult; they are of personal nature and their result might sometimes be painful for the main hero as they influence the global situation and the lives of friends and foes alike. Surely, any ending will be a personal success for the hero; all that remains is the question of how high the price of success shall be...
GamingNexus: I know the release of the game is still a way off but has there been any thought to releasing any content packs once the game has been released?
Michał Madej: At the very moment we are not intending to release any content packs after the game’s release. However, having the right toolset and fans in mind, we reckon there will be quite a lot of additional content for the game. The D’jinni toolset enables the user to easily create additions and modifications for the game. The creative response from the fans will be animated through a community web site specially designed for this purpose. Perhaps, apart from the things created by fans, there will also be some additions of our creation but this remains to be decided at a later stage.
Finally, I wish to thank you for interesting questions and invite gamers to our game’s web site. There, you will find all the information about The Witcher.
GamingNexus would like to thank Michal for taking the time to answer our questions as well as Tom who helped coordinate the interview.