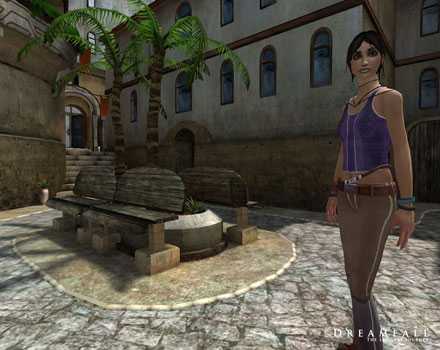 Written by Ben Berry on 5/25/2006 for Xbox
More On: Dreamfall: The Longest Journey

The first time I saw Star Wars: The Empire Strikes Back, I was really sad when it was over. Being only 6 at the time, I couldn’t understand why things looked like they couldn’t get any worse for any of my childhood heroes. Han Solo was frozen in Carbonite. Luke lost a hand and even worse, found out that the Man in Black was his father. Finally, C-3PO was in pieces on Chewbacca’s back, which gave him even more excuse to whine. My young mind couldn’t conceive that throwing your characters into all sorts of turmoil is a primary plot device for the second act of any trilogy. And without giving away too much, that’s exactly what you can expect from Dreamfall: The Longest Journey.

This game starts basically where it ends: with the main character in a coma and hovering near death. For those of you who played the original (I am not among those who did), the main character this time around is not April Ryan (although she is one of the 3 playable characters, and is integral to the plot), but Zoe Castillo, a young girl who has lost her passion and path in life. Dropping out of college in the year 2219, she returns home to live with her father in , who doesn’t understand what she’s going through, but supports her as she struggles to find her way through the changes in her life.

As the gameplay commences, we learn about Zoes’ life. From the fact that mobile phones are more important than they are to today, to Zoes ex-boyfriend, who winds up getting her involved in uncovering a plot so sinister that it threatens the fate of not one, but two worlds.

Dreamfall plays very much like a virtual “choose your own adventure” novel. While there are plenty of things to do, choices to make, areas to explore, and puzzles to solve, most of the truly important parts of the game occur in cut scenes. All of the dialogue, much of the interaction between characters, and all of the pivotal moments outside of combat system occur in video sequences. For those that would rather do than see, this can be a frustrating aspect of the game. I found I really enjoyed the cut scene portions of the game as the plot and dialogue are mostly well done.

Much like the original The Longest Journey, puzzles are one of the major aspects of the game. In contrast to the first installment, the puzzles have were dialed back and simplified to the point where they were almost too easy. In fact, the only difficult puzzle is an audio puzzle that if you pay any attention to minute details, you’re sure to pick up without too much trouble.

I’ve heard from some folks I talked to that the combat system was too simplified and offered very little in real danger to the character. While I agree that the combat system is easy to pick up and not all that unique, I think it fits in with the main storyline. Our heroine is not a ninja; she’s a college student who takes what is essentially kickboxing in order to stay in shape. Combat in the game serves to further the plot, not as the sole focus. Developing the combat any further would have probably caused more focus to be put on combat by the player, as opposed to making it a means to an end, as it was appearantly intended.

Graphically, Dreamfall really shines as an Xbox title. The environments are rich, almost believable, which is a difficult thing to do for a game set in the future. This is done through a mixture of current architecture and futuristic cityscapes that add a real flavor of the universal nature of the game. Each environment the character is thrust into is fully immersive, whether traveling around the world, or dreaming your way into another, each city is unique. In addition the character modeling is some of the best I’ve seen in an Xbox title to date.

The audio is another area where Dreamfall really excels. The voice acting is well done, even in the cases where the dialogue trips over itself a bit. The mostly ambient techno music tracks fit the mood of the ‘Stark’ world very well, while the more melodious tracks played in ‘’ lend themselves to the medieval theme of the world of magic. The occasional track with lyrics fit well, and mostly works within cut scenes to help set the mood. The only issue with the audio is that only two sentences are loaded at a time, so there are sometimes strange pauses in conversation while the next section of dialog is loaded. This is more than made up for by the wit and occasional humor in the story (including a joke about everyone’s favorite hobbits that both took me by surprise and made me laugh out loud).

The in game controls are fairly standard and intuitive, with the only issue being the camera. The camera is always a 3rd person view and is manually adjustable. The camera also will auto adjust to always follow the primary character from behind. This adjustment is sometimes a little slow, so you wind up having to adjust it manually, which can be an issue during combat.

The plot has a good pacing to it, and reveals the storyline in a decent time. Total game play took me about 16 hours from start to finish, with a couple of hours of re-exploration following completion, to make sure I really didn’t miss anything.

The part that got me about this game, is that when it was over my feeling of accomplishment of finishing a puzzle based adventure game was tempered by the fact that I don’t really feel I accomplished much. The game ends essentially where it starts, with the plot developments along the way simply filling in the back-story as to how Zoe wound up in the coma. In addition, there are several characters who are partially developed, but do not receive any sort of resolution at the end of the game. This was particularly frustrating, as it made me feel that I had wasted my time in working with the characters who are not further developed, even though the game forced me to use them in specific sections of the plot.

Overall the game is an enjoyable experience, and while the ending left me wanting for the next game in the series to see how things wind up for Zoe, April and ‘The Prophet’ (the 3rd playable character who begins to undergo a life altering change in beliefs right as the game ends), I just don’t know if I’m willing to spend another 20 hours playing a game that I might feel angry about when I finished. Then again, so many games we play these days are so generic that they elicit no emotion at all. So playing a game that brings out something as strong as anger may not be a bad thing after all.