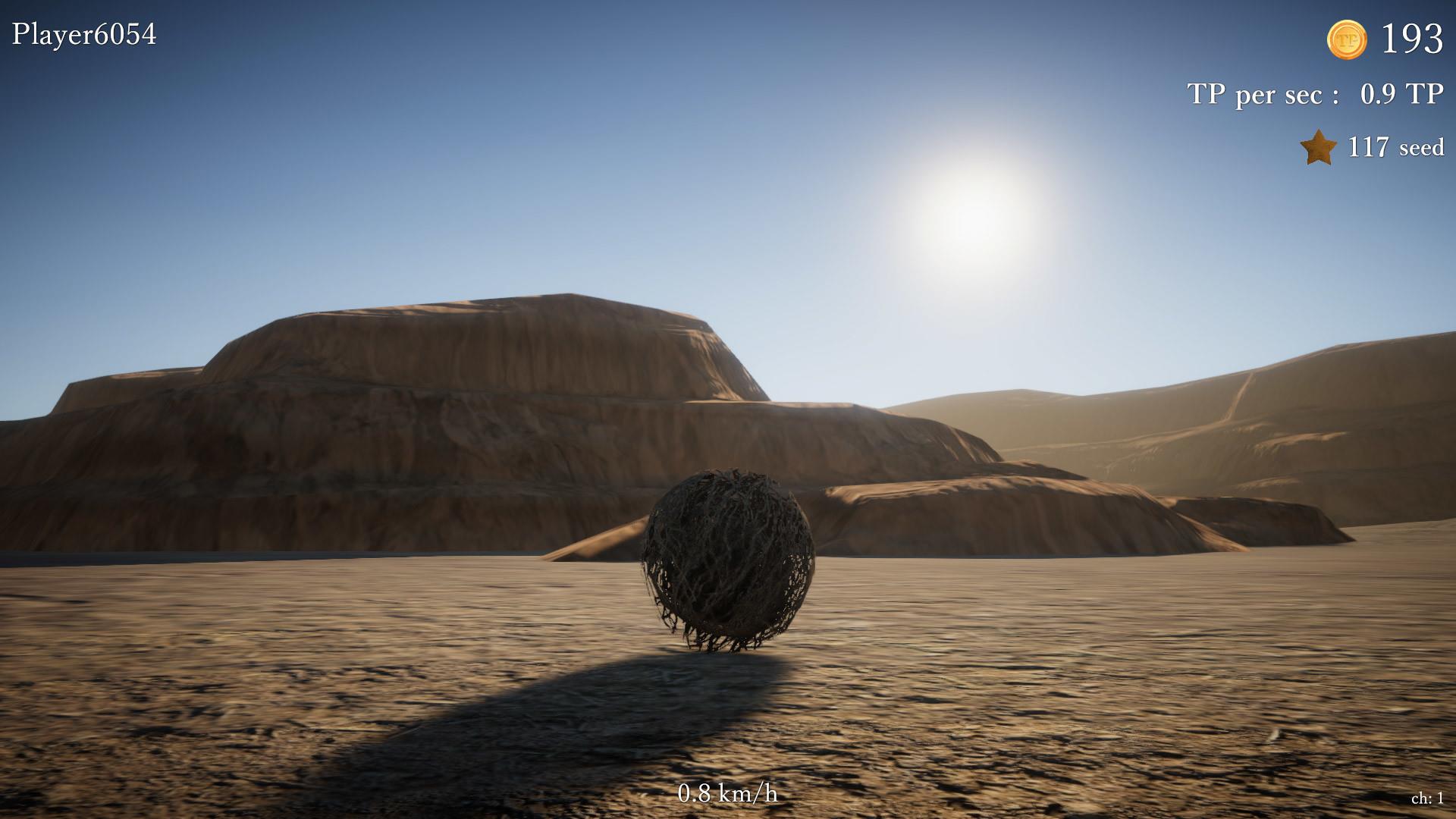 Written by Elliot Hilderbrand on 1/25/2023 for SWI
More On: Tumbleweed Destiny

I don’t even know where to begin regarding Tumbleweed Destiny. You’re a tumbleweed, tumbling about, simple as that. If you have ever been curious about what that may entail, then Tumbleweed Destiny has the very unexciting answer for you. But you’re an intelligent person, smart enough to read what I’ve written here, so you can probably guess what the life of a tumbleweed would be like. There’s quite a lot of tumbling and very little else.

As I said, I didn’t know what to expect when I began Tumbleweed Destiny. I watched a trailer and decided that I wanted to try this out. There was something that I just didn’t understand. I thought this might be a game within a game, having some hidden agenda behind it. The game is made by one person; whenever I see that a single person managed to not only create a game but have it published for the masses, that earns my respect. I sometimes find it amazing that I can finish a single review; making a game by yourself is another feat I’ll never accomplish.

Does it feel like I’ve been stalling? That’s because there isn’t much to explain with Tumbleweed Destiny. You play as a tumbleweed out in some desert in the middle of nowhere. There are rocky hills, cacti, gusts of wind, and one empty saloon for you to visit. On occasion, you are visited by a monster who looks like a treant, a monster that looks like a humanoid tree of some type, angrily walking in a circle around the saloon. The goal is simple - move around and collect TP or tumble points. The more you move, the more points you earn. You use the tumble points to make upgrades to your tumbleweed. You have a few upgrade options: making your tumbleweed move faster, upgrading how quickly you earn TP, or allowing yourself to auto-move. Each upgrade has several levels to each one, meaning there is always room to improve. The easiest way to earn TP is by going around and knocking down cacti. You can also take down the treant alien boss walking around. You do this by simply running into them. The faster you are going at the time, the more damage you do.

In the beginning, your tumbleweed moves at the slowest pace imaginable. The first ten to fifteen minutes every time you start are the worst part of the entire game. It takes too much time before you have a tumbleweed that can do anything. It feels even worse when playing online; seeing other tumbleweeds move like they’re Sonic the Hedgehog while you feel like a turtle sucks. Collecting TP to get a fully upgraded tumbleweed is not fast. There’s also nothing else to do in the game except collect TP. You can put your tumbleweed onto auto-move, but the collection of TP feels non-existent compared to controlling the tumbleweed myself.

Content is an issue. There needs to be more to see and experience with Tumbleweed Destiny. Right now there is one building to experience in the main game. There are signs throughout the map that explain the game. Earn TP by moving. Spend your TP to upgrade your tumbleweed. Go through the gusts of wind to move faster. Knock over cacti to earn TP. The world is about to be destroyed by aliens. That last one feels a little out of nowhere, and there isn’t any follow-up to it. But the world will eventually explode if you do not stop the alien tree monsters. 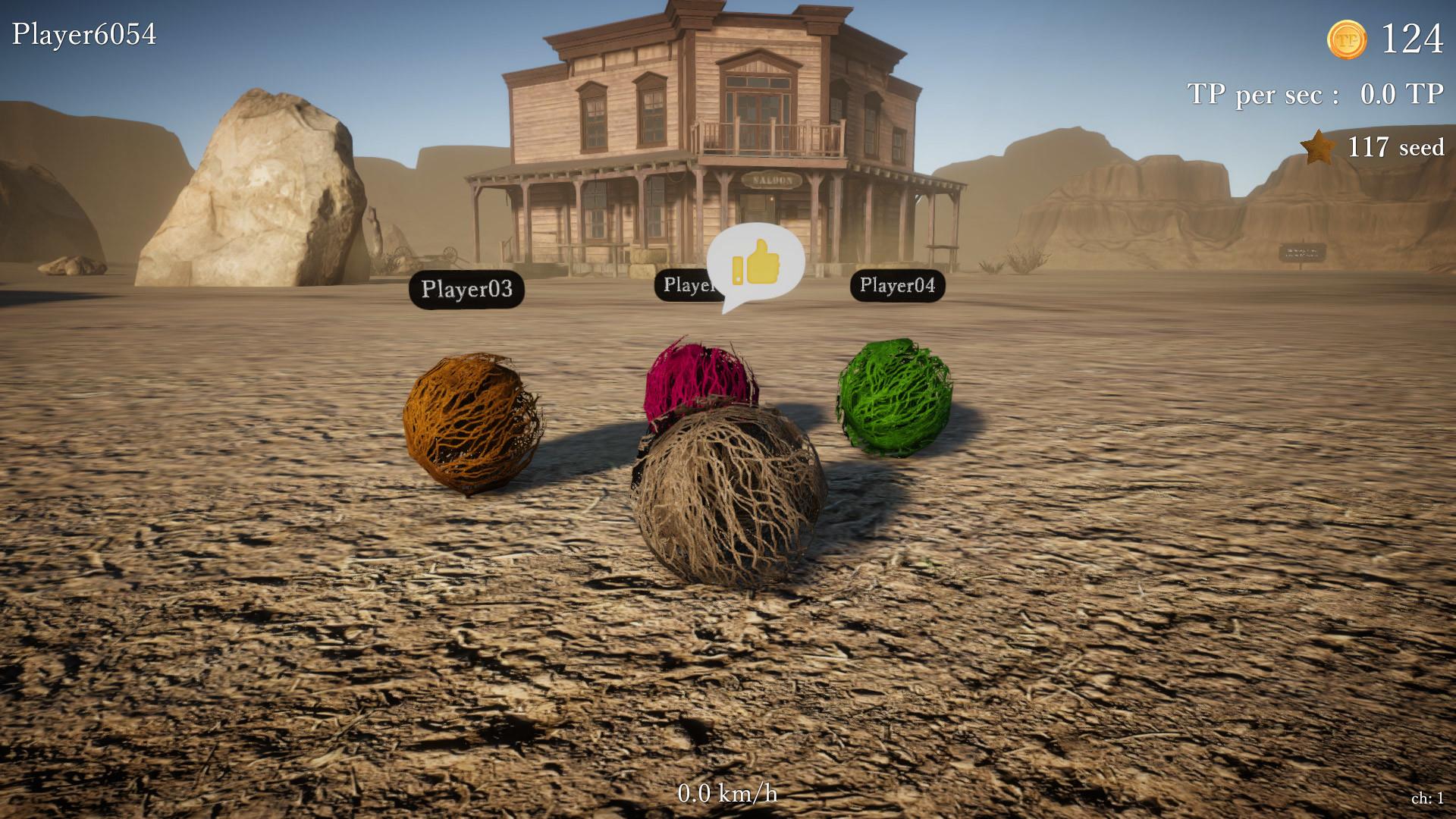 Customization of your tumbleweed ends with picking a name and choosing which color you want to be. Communicating with others when you play online is also limited. You have a standard set of emojis you can flash, and that’s about it. There’s no goal to work towards that requires cooperation to complete, so communicating isn’t necessary. A lack of proper communication makes me feel like I am playing alone, even when I am online with others.

Tumbleweed Destiny offers two modes of playing, solo or online. The only time I would play solo is when I didn’t have a connection to the internet, as everything moves a little faster when playing online. You can earn TP faster, you have others to help take down the enemy treant walking about, and on occasion, someone will choose to plant themselves as a seedling, giving you even more TP when they do so. I had zero issues while playing online with my connection in either docked or handheld mode. 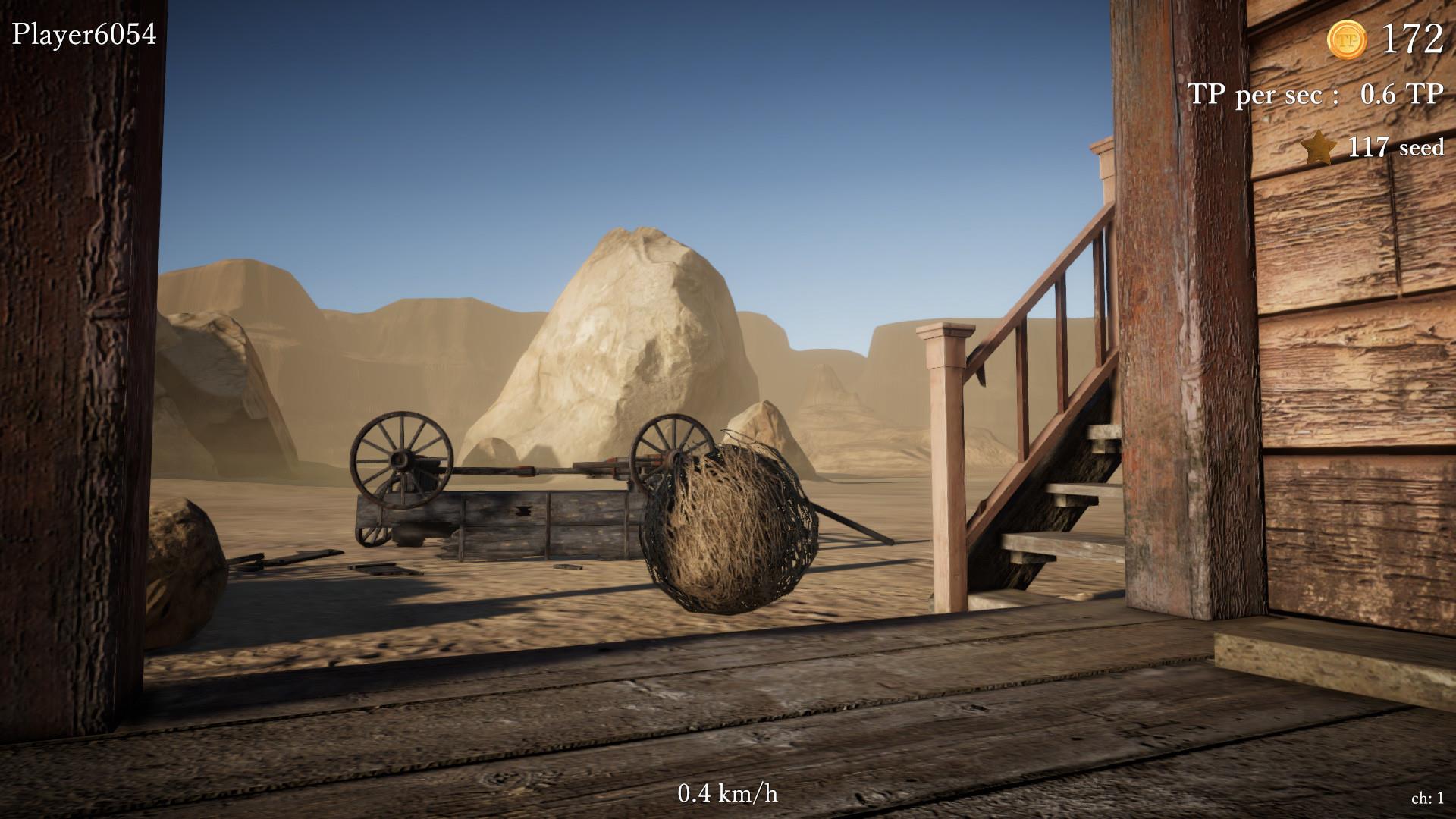 The red and blue rockets located randomly serve as a bot of endgame to Tumbleweed Destiny. Once you feel like you have upgraded enough, you head to the red rocket, which will take you to the moon. There you encounter a machine about to shoot a laser at the earth, blowing up the planet. You need to destroy the laser before that happens. The first time I took the trip up I needed to be more powerful. I had no idea where the rocket went, but I decided that I had seen enough of the desert map that I wanted to go anywhere else. It took around three hours of playing and replaying before I felt strong enough to return and take on the machine placed on the moon. The earth doesn’t potentially get destroyed until you go up in the red rocket to the moon. Once you are there, a countdown begins for you to take on the machine. The moon and laser machine on it serves as one of the endgame goals. The blue rocket, which costs more TP to ride, is the second. 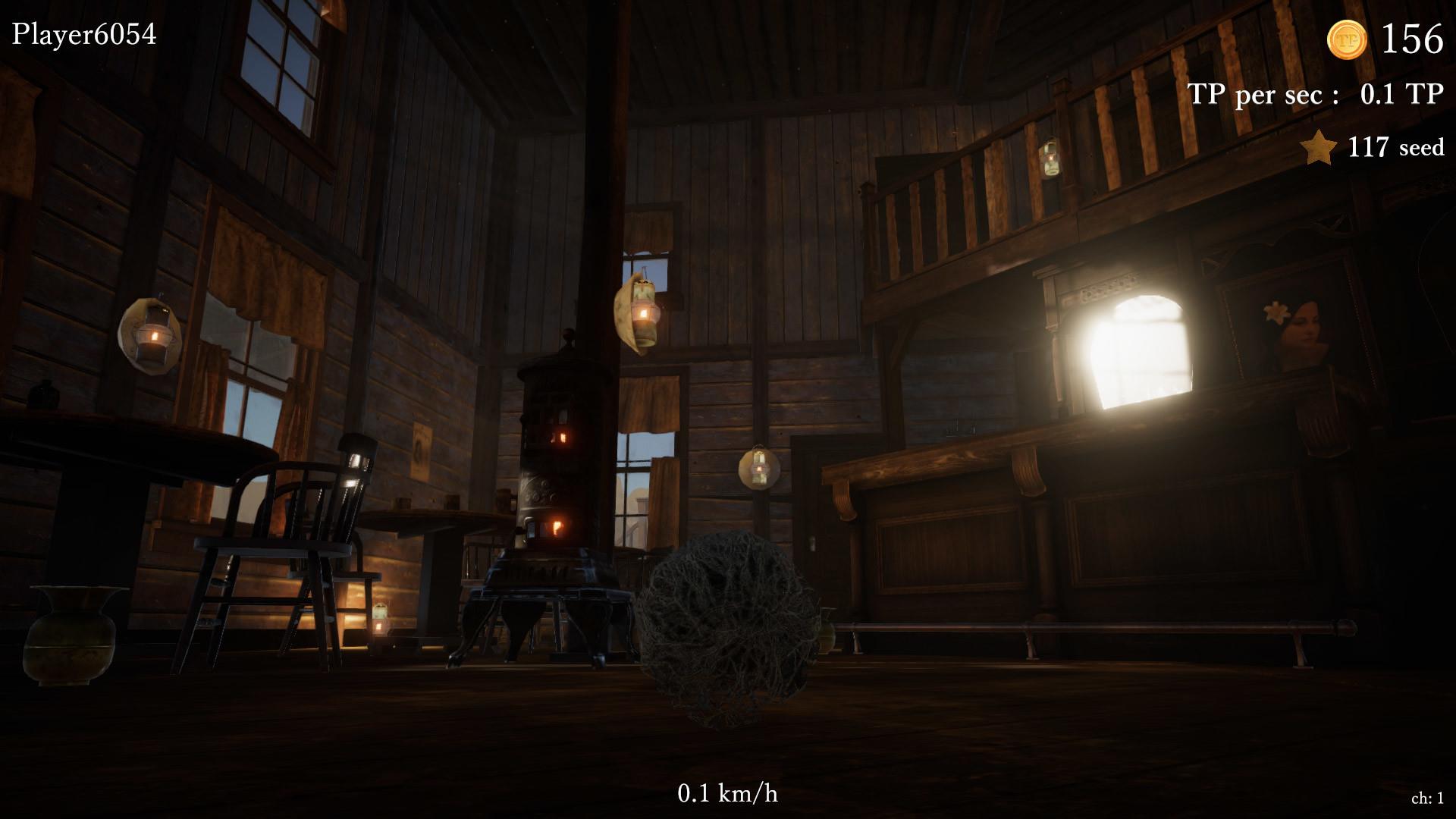 Rebirth is the gameplay loop. Upgrade your tumbleweed as much as you can, turn into a plant and earn seeds, rinse and repeat. I never felt like I was relaxed while playing. I hated that I couldn’t move as fast as I was able to when I was fully upgraded; but the whole point of upgrading is that I make seeds and begin the process all over again. I’m just grinding for upgrades to turn around and start grinding again. 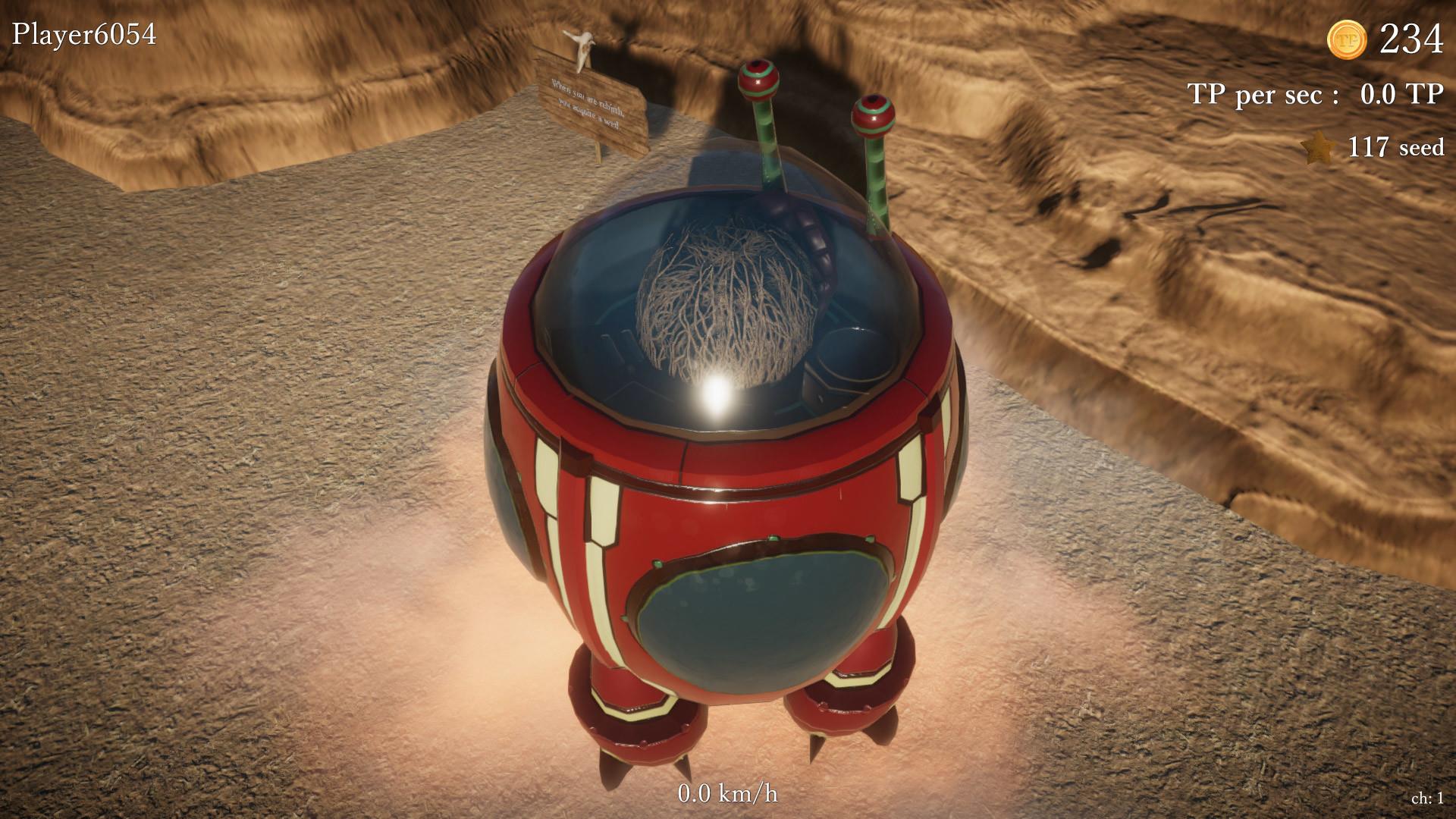 Tumbleweed Destiny had me questioning my sanity after a few hours. Putting my tumbleweed on auto-move means I can walk away while I’m playing, but then I don’t feel like I’m really playing a game. There are game mechanics and TP to earn while playing, but it feels like a terrible cycle to go through again and again. Once I seed my tumbleweed and begin again I am back to square one regarding TP and upgrades. Having to start all over again hurts. Instead of moving across the desert at a fast pace I am stuck moving slowly. It takes too long to get back up to a speed that feels rewarding. The reward for making a giant grind is to reset and start all over again. The amount of seed points you earn makes each grind after it faster, but I can’t tell. The reward for climbing to the top is that I get to do it all over again, only it’s about five minutes faster than it was last time.

The game's lack of depth and lack of goals to work towards leaves much to be desired. Tumbleweed Destiny is a simple game where players control a tumbleweed in a desert setting and collect TP to upgrade their tumbleweed. The game's slow start and limited activities, like knocking over cacti and taking down a repeating enemy, make it unengaging and uninteresting. The game also lacks proper communication options, making the online play feel like a solo experience. The end goal of reaching the moon, or going to the second location once you’ve earned enough TP was underwhelming to say the least. The grind was long and tedious; the juice is not worth the squeeze for Tumbleweed Destiny.