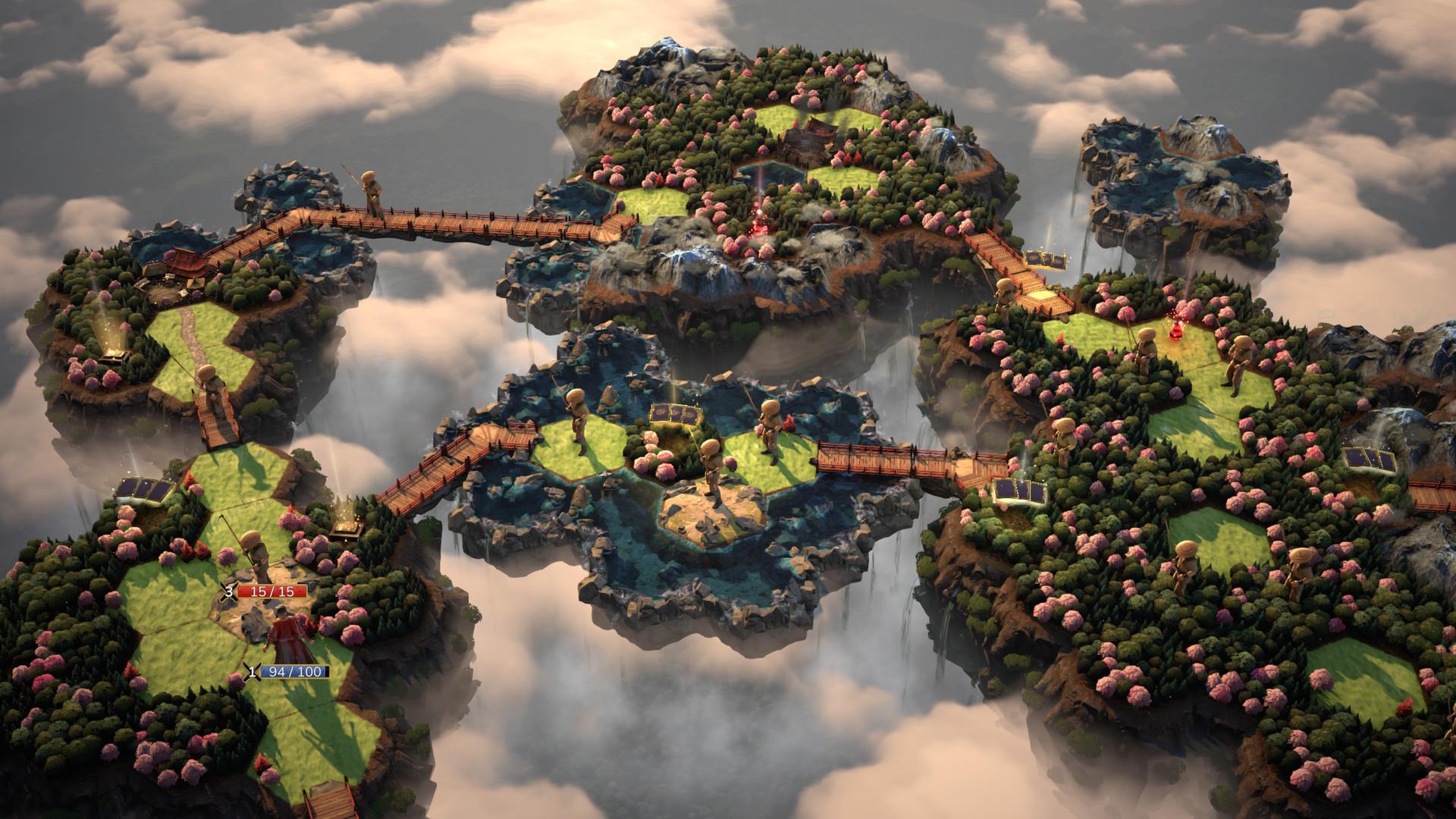 I’m not sure what I expected when I came to Mahokenshi, but whatever it was, I was completely wrong. I had been playing Marvel Midnight Suns pretty extensively over the holiday break, so I suppose I was thinking that this would be another tactical card battler – and it is, to an extent. But Mahokenshi is very different from other card games I’ve played for several reasons, not the least of which is its overwhelming difficulty.

In the opening hours of Mahokenshi, I was really digging the game. The game loop here is unlike any I’ve experienced in video games, with each level presenting two or three very unique challenges for the player to overcome. The first few levels take it easy on the player, and I was in a good place, where I was learning the ropes, feeling like I was getting it, and making a bit of progress. Then, a couple of hours in, Mahokenshi lowers the boom, blasting the player in the face with very difficult (but not impossible) challenges that even the most stringent and disciplined samurai would be hard pressed to overcome. To put it crassly, this game beat my ass. 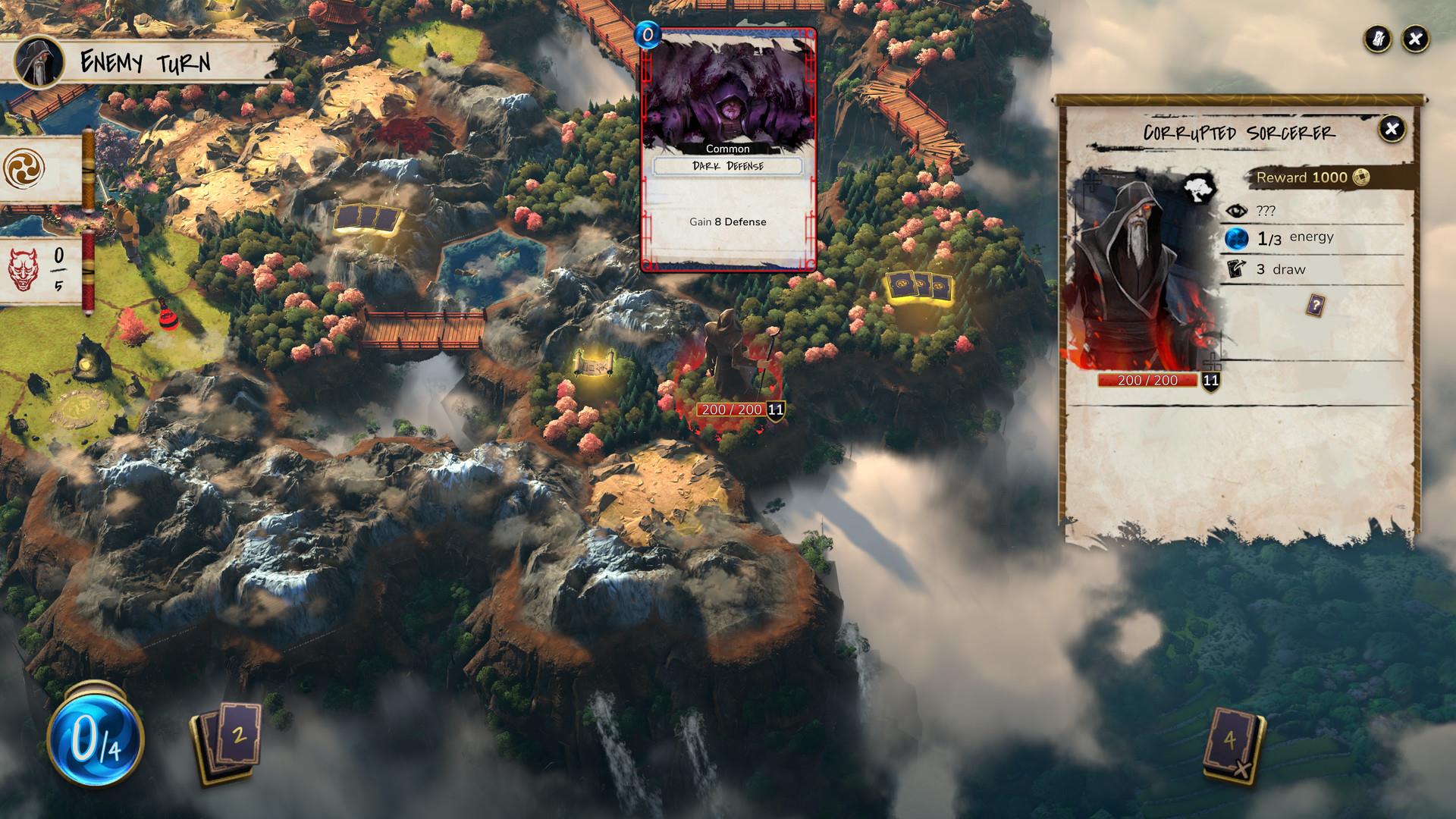 But before I get into the way Mahokenshi took a flamethrower to my fighting spirit, let me share a bit of setup and praise for the game’s very unique flow. At first glance, players could be forgiven for thinking that this game is a Slay the Spire-style roguelite deck-builder. But in reality, this is a game that has very specific challenges that push the player to piece together the best strategy. There is nothing procedural or random about anything in Mahokenshi. There are instead meticulously constructed levels that have clearly been created with great care.

The player starts the game with one character, or Mahoken, but quickly opens up another (a third and fourth eventually follow). These characters each have their own specific decks of cards, each of which focuses on a unique skill or approach to combat. Akaya is a swift and deadly character, able to traverse the terrain quickly. Kaito is a slower, defense-based character, who is able to build up counter-attacks. Sota focuses on stealth and poison, while Misaki is a confusion/misdirection mage. 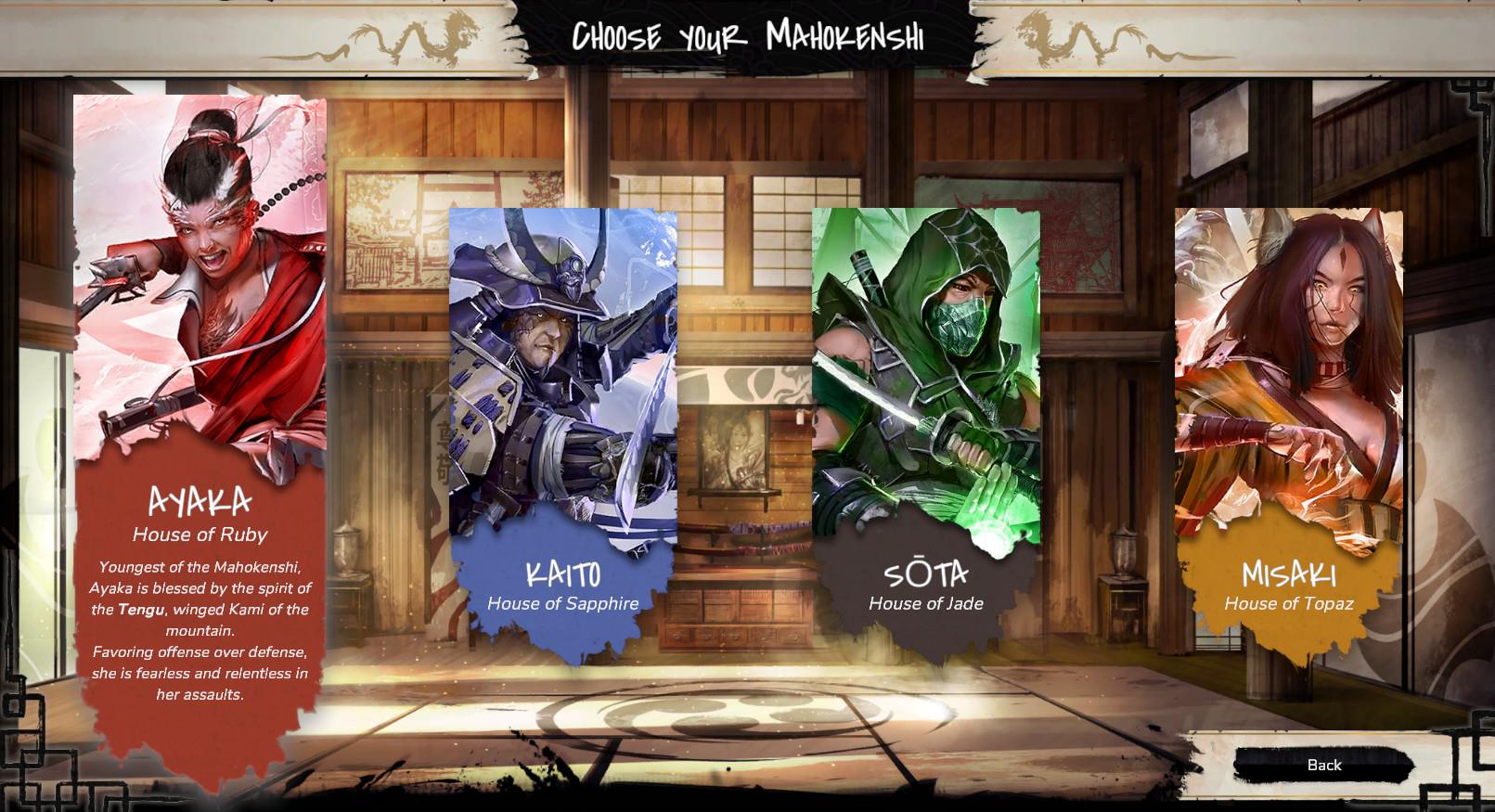 The player selects a character and enters one of the game’s gorgeous levels. These levels reminded me more than anything of beautifully designed tabletop board game levels. The player starts the level with four “energy”, or moves (though in some cases, you can add more as the level goes on). These energy points can be spent to move your character, or to play cards, each of which has its own energy cost.

Each character starts with a simple deck, containing a few basic attacks and movement skills. By moving through the level, the player is able to build their deck, either by buying cards at nearby villages or looting them from the terrain. Cards vary; some are straight attacks, some are movement-based, some are defense-oriented. 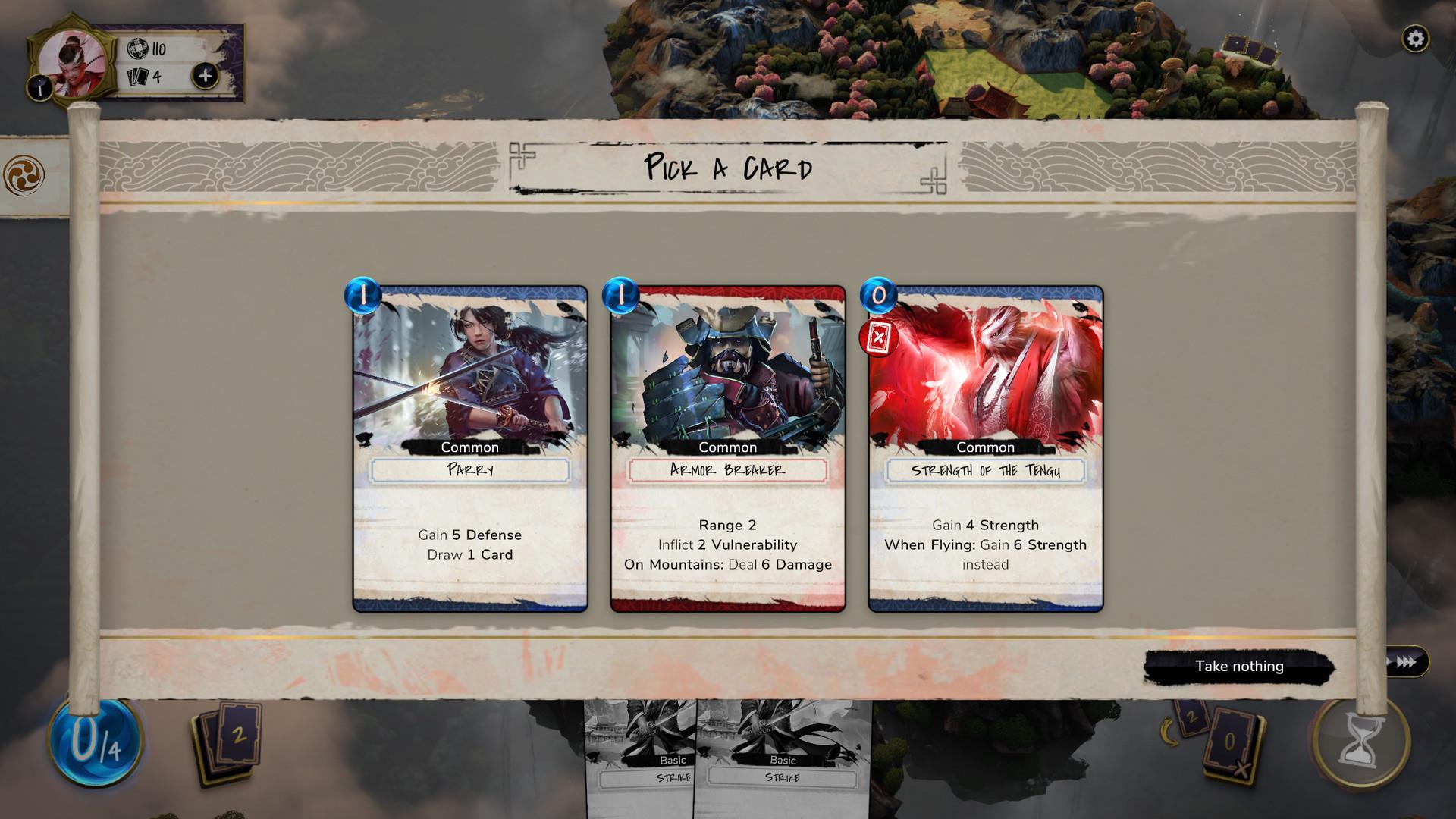 As the player begins moving through a level’s hex-based environment, Mahokenshi’s board game influences become apparent. At first, I balked against having to share my energy between movements and card plays, but the wisdom of this setup quickly becomes apparent. With constricted energy, the player has to make serious choices about where and when to move, making every action subject to very careful consideration.

It is this need for constant care and attention that is Mahokenshi’s greatest strength and biggest frustration. Though I’m sure this isn’t quite true, it often felt to me that each level had a specific “solution”. Not every character can handle every challenge; it often feels like a specific character is needed, who in turn must be working a particular strategy. Waypoints must be reached in a specific order, and certain buffs were absolutely needed to see a level through to the end. Again, I’m sure that there is more than one way to defeat these levels. But after a great deal of trial and error in each level, I was left feeling like I was parsing out the winning strategy through failure. 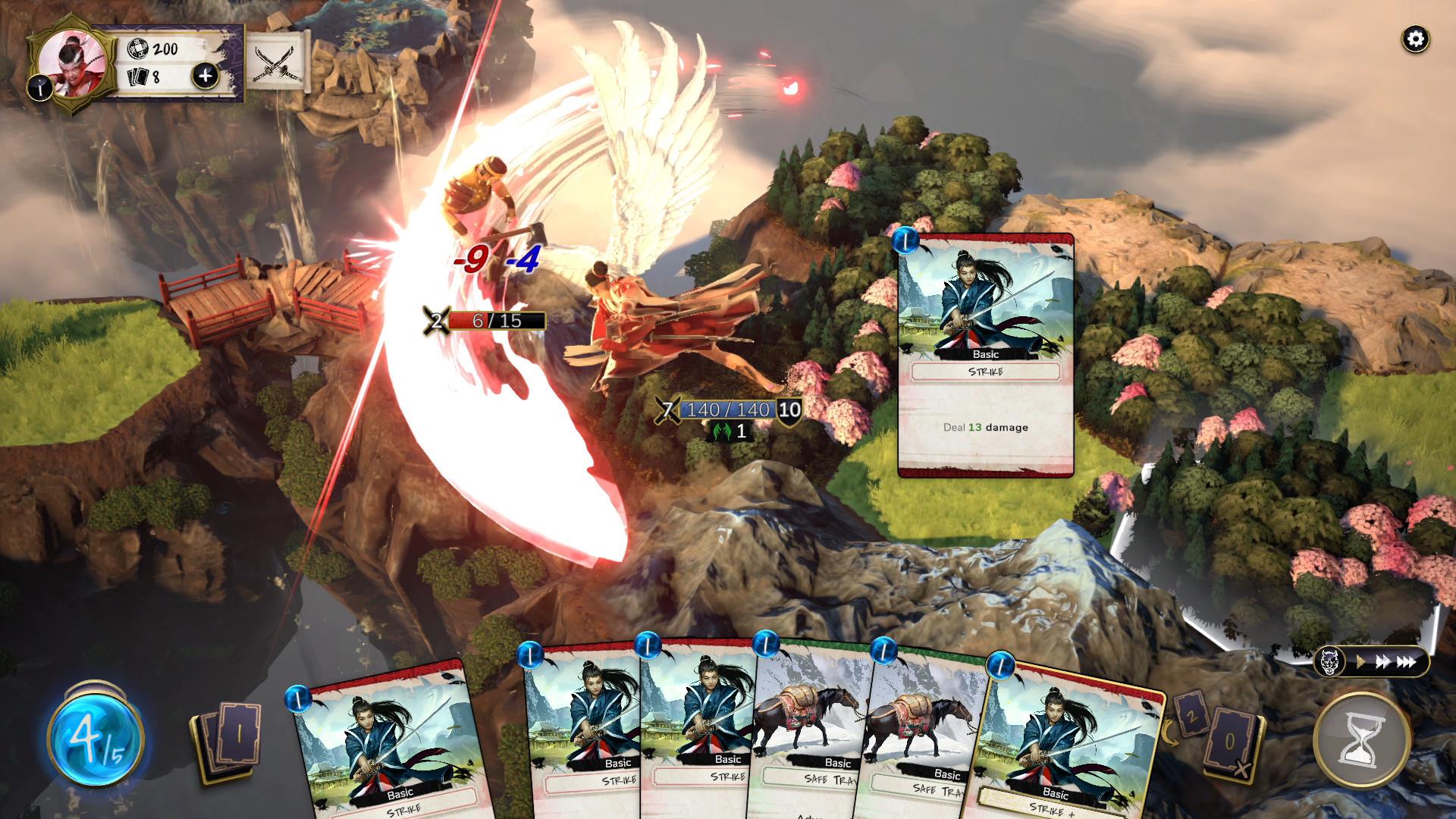 The problem with this dynamic is that there are simply too many variables in play for this to work correctly. For example, in one early level I determined that the best way to win was to use Kaito, with with a strong focus on his “Spike” ability, which does damage to attackers in accordance with the number of “spike” points he has built up through the use of various cards. But unfortunately, I kept attacking the level and not getting any “Spike” cards in the random draws from chests and in villages. As a result, I had to play the level over and over until I hit on the right combination of cards needed for my strategy to work.

Don’t get me wrong, there were no “throwaway” tries. I never made a run and then threw in the towel when my card draws went the wrong way. I tried my best every time to beat the level. But my inability to do so just further reaffirmed in my mind that there was only one “true” solution to the level. This made it feel less like strategy, and more like a long, slow exercise in puzzle-solving. And like a strategy board game – or even chess – once you know the game, you can see about ten moves out that you are already done. After that, it’s just a matter of watching the slow-motion train wreck as your run slowly slides into the abyss. 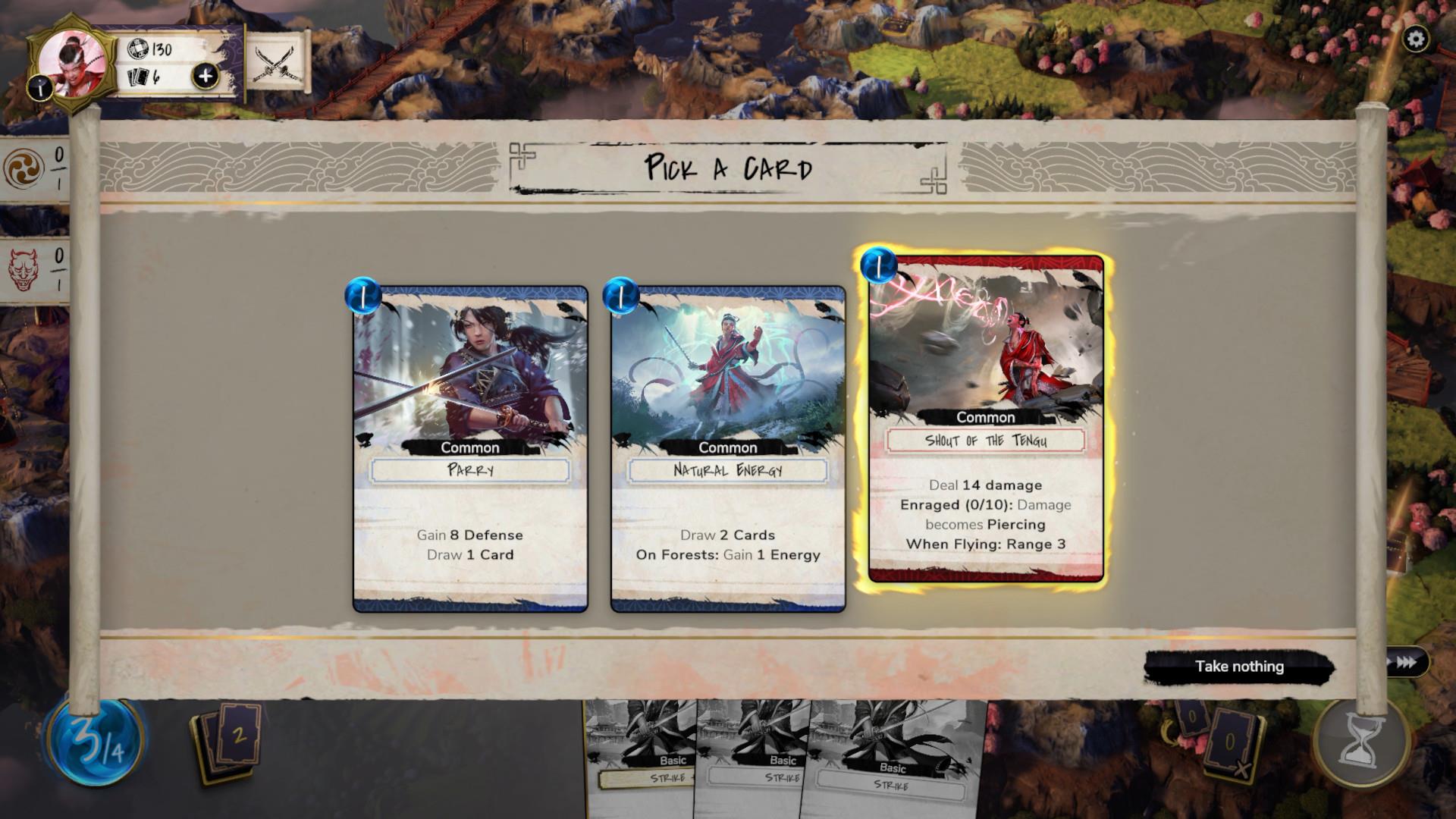 There are a lot of audiences that are going to adore Mahokenshi. Board gamers, deck-builders, even roguelike fans may want to give this one a look. A lot of players really enjoy this accelerated level of difficulty, and more power to them. There is no doubt in my mind that the developers of Mahokenshi have delivered exactly what they set out to create – this entire game is an exercise in precision.

But sloppy players like me sure would like a difficulty setting so we could be a little more creative in our approach to some of these levels. As much as you can learn from your mistakes, it hurts when - a full half-hour before a run is technically over - it dawns on you that you are already screwed. I enjoy the field of battle as much as the next guy, but Mahokenshi had me considering waving the white flag.

Approach with a thick skin and patience, and you might find that the moments of triumph outweigh the frustrations. But don’t be surprised if you find yourself bouncing off of Mahokenshi, as it is a game absolutely without pity.

Mahokenshi will test every logical and strategic bone in your body. A mix of deck builders and board games, Mahokenshi pushes the player to try different strategies, and the game is not shy about smacking down your pitiful attempts until you get it right. Come prepared for a unique experience, and put on your toughest armor, and you may get hours of enjoyment from this one. Just don’t take it personally when you find yourself face down in the mud.