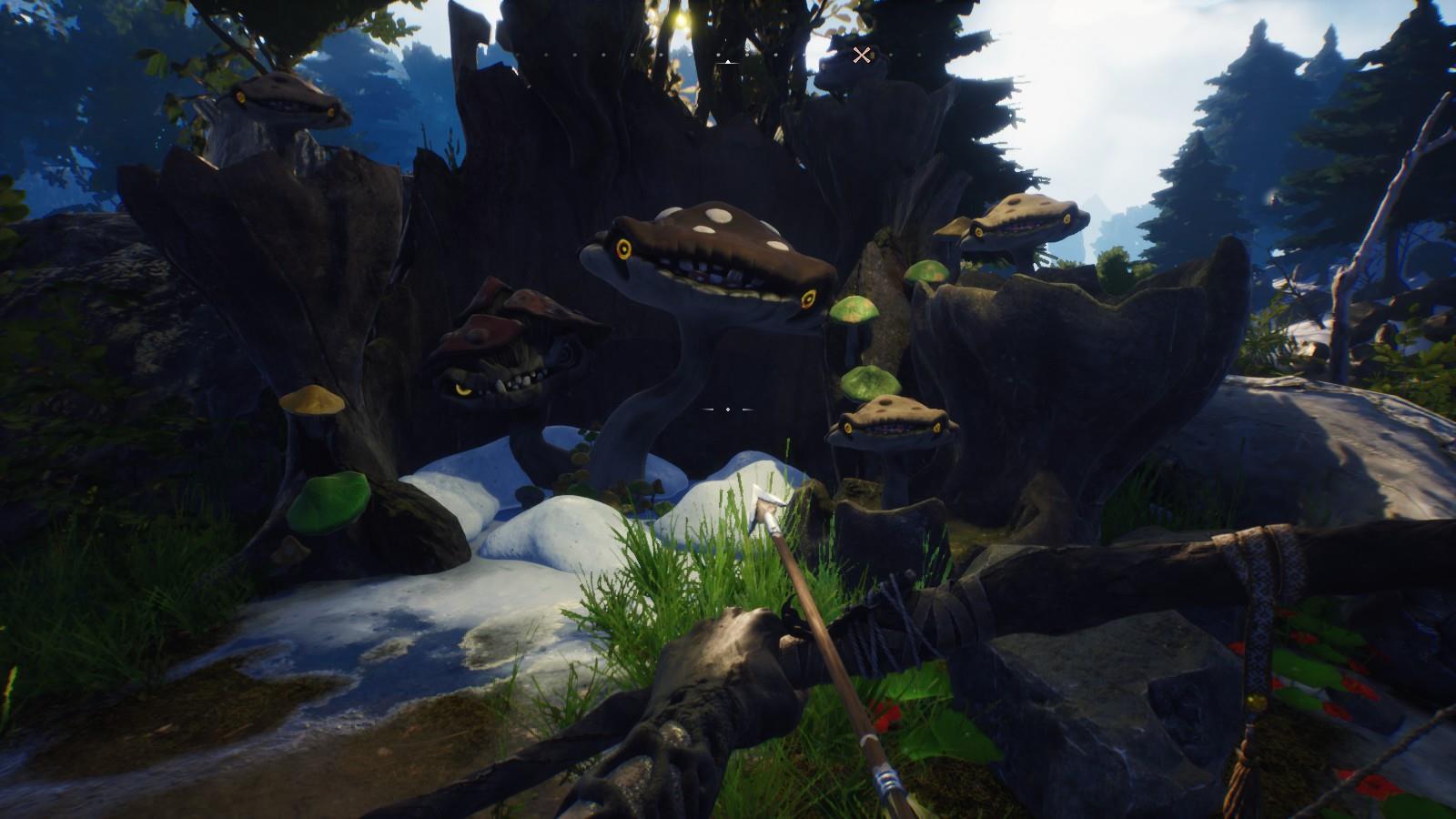 Games based on fairy tales and folk lore are nothing new, even if you don’t take Disney into account. Typically though, when I hear about or play a game that’s based on something like that, I’m at least a little familiar with the source material. When I first started playing Blacktail I had no idea that the game is based on the Slavic tale of Baba Yaga who, according to Wikipedia, “is a supernatural being (or one of a trio of sisters of the same name) who appears as a deformed and/or ferocious-looking woman.” Given that fairy tales and folk lore can translate into games decently well, once I learned the origins of Blacktail, I was excited to see how the folklore translated into gameplay.

In Blacktail you play as a young girl named Yaga who was accused of witchcraft and banished from her village. She wakes up in the woods with some memories of being with her friends and her sister.  A voice tells her she needs to find “The Hut” and she sets off to do so. At the start of the game, you have a tutorial of sorts that tells you some of what you’ll need to know in order to survive, as Blacktail does have survival elements to it. This entails hunting for materials for crafting, finding food to eat to replenish health, and just trying to survive the woods as you embark on your journey down whatever path you wish to go on be it light or dark. It’s not as simple as that though. 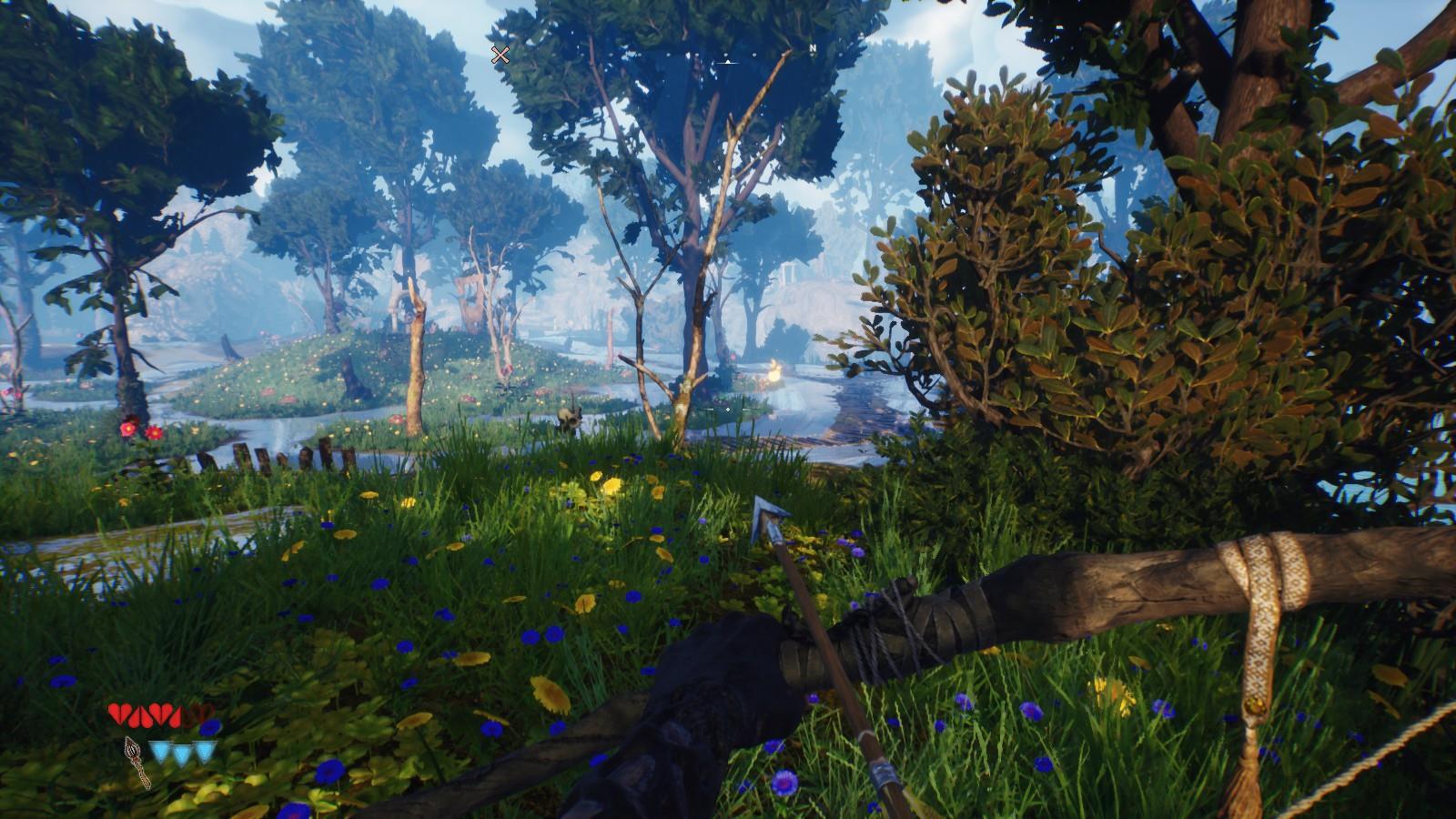 At the start of your journey you get your bow, as this is your only weapon throughout the game - though you won’t be completely defenseless outside of that.  While you will be gathering materials to help craft skills, two you’ll need to keep an eye out for are sticks and feathers so you can craft arrows. Depending on how good you are at Blacktail's combat, you’ll be crafting these a lot and you can only hold so many arrows and materials (you’ll eventually be able to craft different types of arrows). Once you get enough materials you can return to The Hut (either by trekking there or talking to a black cat to warp there) and exchange them for certain skills. Only a few are available at the start as some require a recipe to craft. Even still, it might be worth the time to explore for a while as opposed to just going straight for any objectives you might have.

The primary mechanic for the game is the morality system. At the start, you’re asked if you want to travel down the path of light or the path of darkness. To be honest I’m not certain if this affects anything at the start of the game or is more for just storytelling purposes, but what will affect your morality is the numerous choices you’ll make during your journey. A lot of these will be dialogue choices from other creatures you’ll come across, while others may be something as simple as freeing a creature from a trap. For the most part it’s pretty obvious which choice will keep you on the side of light and which one takes you further down the path of darkness, though I did encounter a few choices that didn't land quite the way I expected. Granted there are technically no “right” or “wrong” answers as what path you want to travel down is up to you. 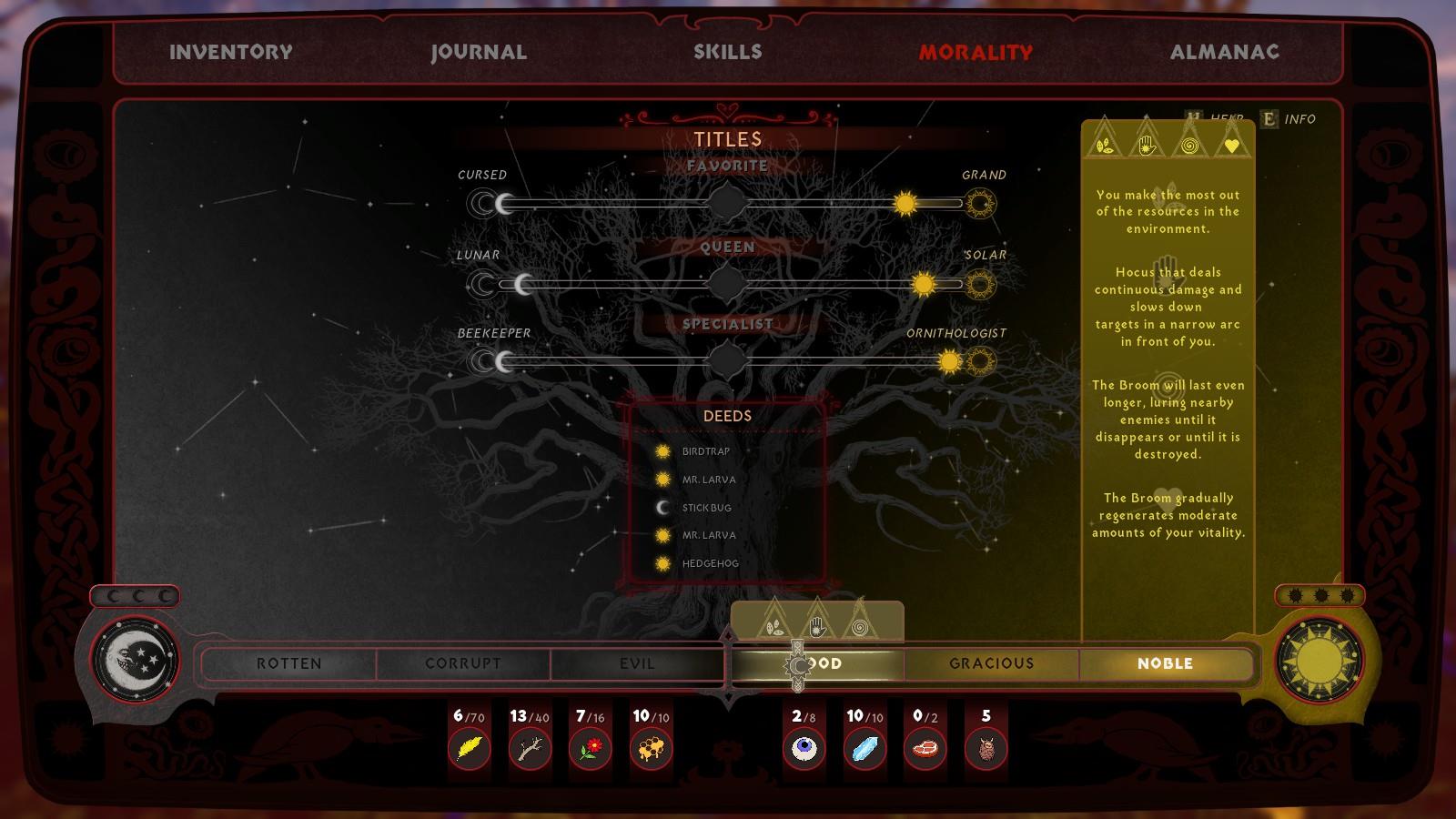 So, what does the morality system affect? Aside from how various creatures and story elements are impacted, it will also affect your magic. Early on, you won’t see much of a difference as the first spell you get lets you push certain objects away from you and knock down some enemies, giving you a moment to clear them out while they’re stunned. Later on you’ll gain access to spells that will differ depending on whether you’re on the path of good or evil. Aside from that, sticking to the light path impacts resource gathering. On the good side, using a broom (an object which lures nearby enemies so you can safely attack them from a distance) restores your vitality, while over on the evil side you can potentially gain back health by defeating enemies. You might be forgiven for thinking this kind of makes it sound like it’s better to be evil.

With the main mechanics explained, how well do they hold up in execution? Well...I’m kind of conflicted on that one. I played using an Xbox controller and didn’t really have any issues with the controls (save for one Hocus, or spell, that requires me to press the right stick which messed up my aim a bit). When in combat everything felt very fluid from readying and firing an arrow to using a Hocus to push enemies back. You can also dash around a bit (with a minor cooldown period after each dash) to dodge enemies and their attacks. All of that went pretty well. What sometimes didn’t go well was just traversing the land itself. 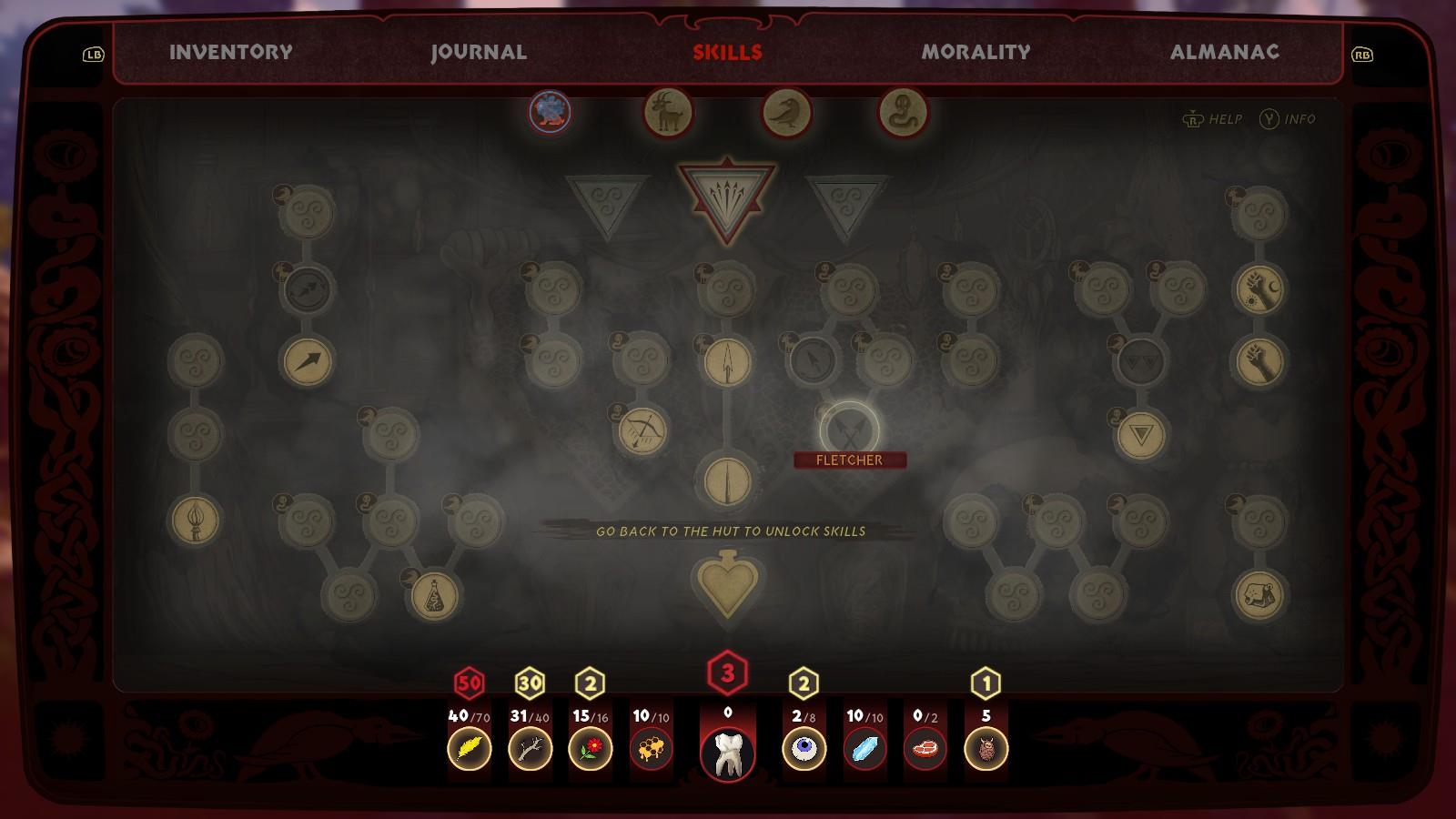 I completely understand that this is likely more of a “me” thing; it can be hard to see where you’re going, let along where enemies are in certain areas. Some enemies are human-sized and can be fairly easy to spot up ahead while others are either kind of small or will pop up once you hit a certain area. While you’re running around you can kind of go off the visible trail and wander around in grassy or swampy areas. In fact, you have to at times to progress a quest or find materials. While you do have a compass at the top of the screen to guide you and point you towards your current objective, it doesn’t show you nearby enemies, especially those that just pop up out of nowhere. I had a few instances where I thought I had defeated all of the enemies on screen until I heard something else behind me, spun around, and got wrecked before I could respond because another group of enemies had popped up behind me. Keep in mind that outside of using mana to push enemies away, you have no weapons outside of your bow.

That “hard to see where you’re going” thing also makes it harder to gather materials, especially when it’s darker, at least if you’re exploring more than just the main dirt path. Some plants can blend in with the green grass or darker areas that can poison or curse you before you can even see them, and some enemies blend in really well with the darkness. I’ve had many times where I’m running through the grass only to get poisoned by a planet before I could see it, or I got ambushed by enemies before I get a chance to respond. In addition it can actually be punishing to explore too far as you may encounter an enemy you can’t deal with yet, which you won’t know that until you attack it, and then it’ll infinitely give chase to you as you scramble back to a shrine to save at (I quickly found out you can’t save while in combat). On top of that, dying will put you back at the last shrine you saved at and can lead to a decent amount of lost progress. 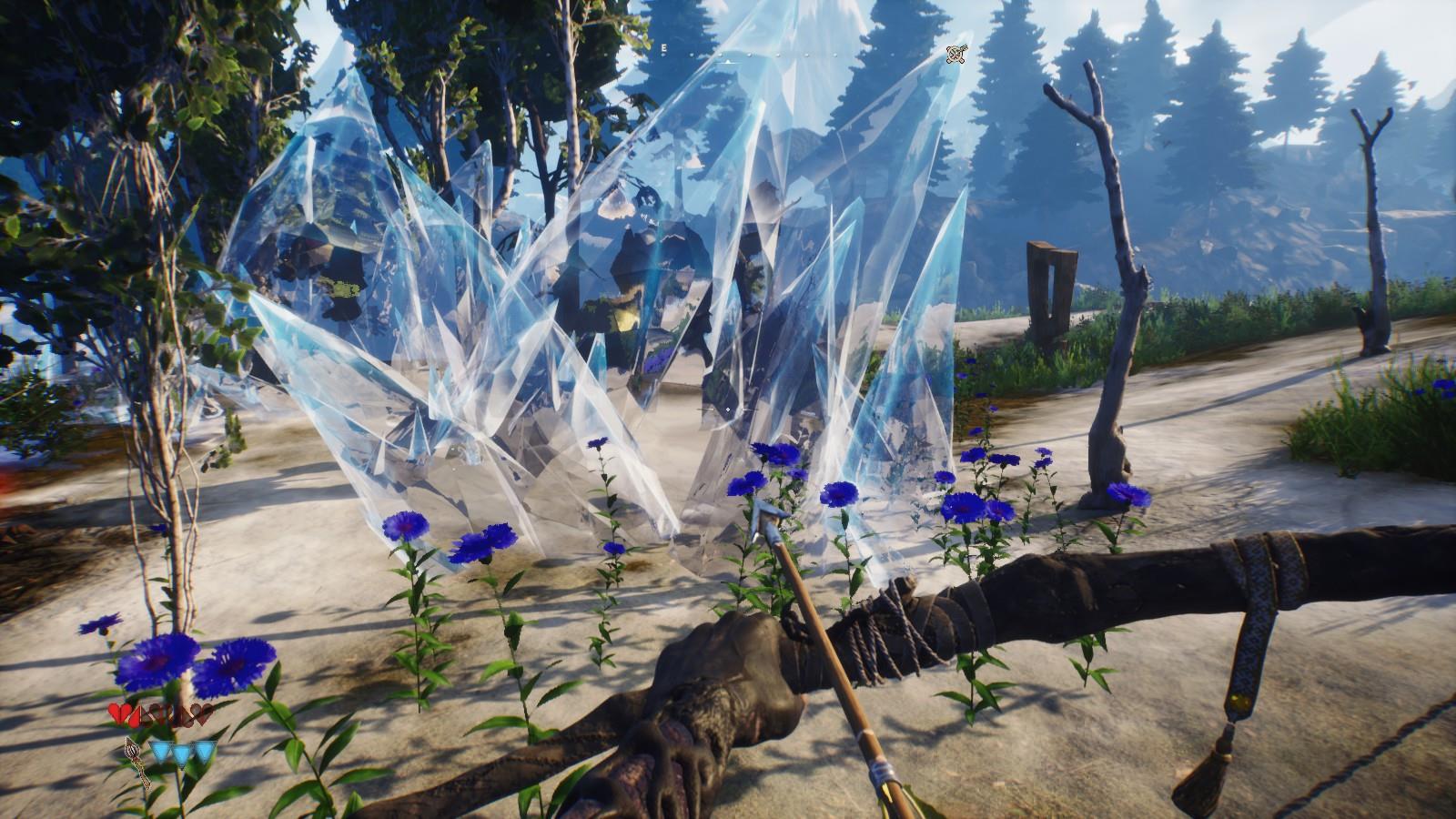 While it seems like I have quite a few gripes with Blacktail, let me be clear with this: Blacktail is a good game, but how you perceive it can also come down to your taste with the survival genre. While there is a good amount of combat, the main focuses of Blacktail are the story, the morality mechanic, and survivability. That last one is my Achillies Heel as I’m typically not good at anything that requires/recommends stealth and survivability, and that was where I had most of my issues. Early on, I was firing arrows at every enemy I saw as opposed to finding ways around them, so I was occasionally low on resources to craft more. On top of that some of the resources have multiple uses, so resource management is a big component of the game.

Blacktail is a good game despite my struggles with it; for the most part the struggles relate to my own skills. It’s not perfect though, as a couple of the issues I had were just general issues, namely only having a bow to attack and no melee attack or defense, and at times having issues seeing what’s in your surroundings until it’s too late. That said though, Blacktail is still a fun game and I wouldn’t mind going back to it at some point now that I’ve somewhat improved on my survivability skills. The storytelling and morality systems work well, especially with your spells and different effects you can do depending on whether you go for good or evil. If you’re not great at survivability you might struggle a bit like I did, but overall Blacktail is enjoyable and the story and morality choices make for a pretty unique experience that I’d recommend checking out.

Blacktail is a great game with some minor flaws here and there, but nothing that really takes away from the experience. The morality mechanics do a great job at shaping your abilities and what you’re able to do and the storytelling is pretty well done. If you’re not great at survival games you might struggle a bit with the game’s resource management, especially since your bow and arrows are your only physical weapons. Overall though, as long as you remember that survival is priority one and firing arrows at everything in sight is priority zero, you should still have an enjoyable time with Blacktail.