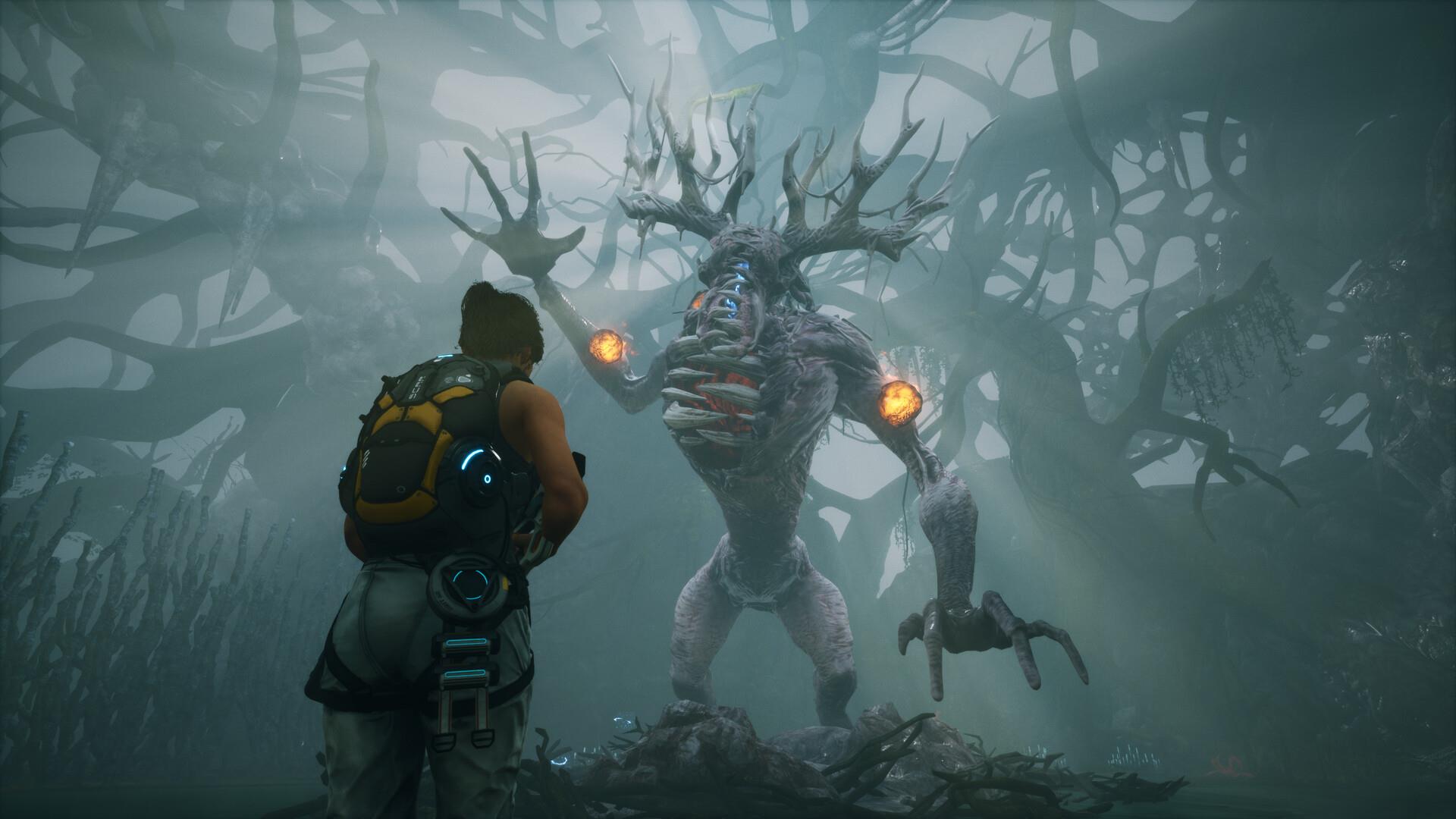 The Metahedron floats in space, a gigantic techno-pyramid, glowing with an unearthly green light. It is enormous, dwarfing the nearby Earth ship Hermes, which has been sent to investigate the strange object. Mankind has long been launching missions into deep space, always keeping a wary eye out for possible signs of alien civilizations, but the Metahedron represents the first time that any such evidence has been found. To the SCAR team aboard the Hermes, the mystery is longer about whether alien objects exist, but rather, what they should do with this one. Lacking any better ideas, the crew of four gather on the bridge of the Hermes and initiate a basic scan. Then all hell breaks loose.

To the player, playing as Dr. Kate Ward, the science officer aboard the Hermes, this means that Scars Above is about to follow a tried but true video game template - the ol' "wake up on an alien planet and try to figure out what's going on" routine. In recent years, this has become almost as ubiquitous as the "princess wakes up with amnesia" trope, but just like that beloved RPG starting point, the "mysterious planet" is used so much because it works. It's a great way to knock players back on their heels, removing all sense of comfort and familiarity, forcing them to poke at their surroundings and try to figure out how things work. Still, players should be forgiven if they start registering some serious Returnal/Red Matter vibes when Dr. Ward wakes up lost and alone with debris from the Hermes scattered around her. 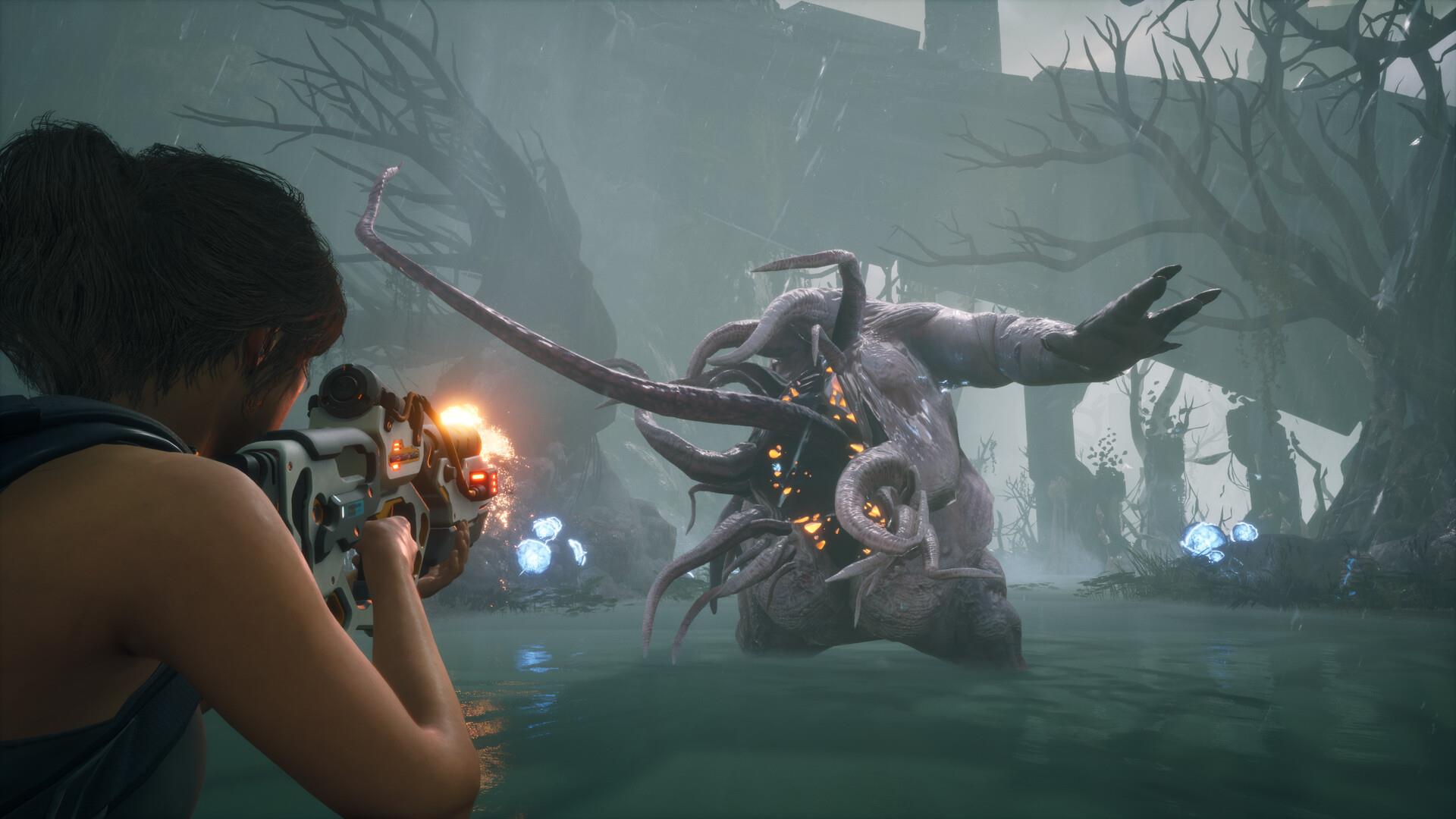 Unlike those games, though, players will not be dodging bullet-hell aliens, nor will they be solving obtuse puzzles to make their way through Scars Above's shadowy planet. Instead, they will be making their way through swampy environs - at least at first - where a variety of mutated wildlife is lurking about, waiting to murder earthlings. As Kate Ward delves deeper into her exploration of the planet, she finds mystery heaped upon mystery. Clues are strewn about the environment, leading Kate to wonder what became of the rest of the Hermes' crew, all of whom seem to have lived entire lives on the planet though only a few moments have passed from her perspective. And who is that mysterious figure that keeps appearing on the horizon, beckoning Kate ever forward with cryptic messages?

Of course, these concerns are secondary to the more immediate issue at hand; the mutated creatures of this planet seem hell-bent on killing Kate well before she can figure anything out. Much of the gameplay in Scars Above involves learning how to anticipate and survive attacks from the various element-based wildlife. Kate has used a portable replicator to create a lightning-based weapon to protect herself on the planet (she also has a handy laser-blade thingie for melee). As she pushed forward through the game's first chapter, she discovers ways to adapt her weapon to add other elemental-based attacks. A fire ammo version unleashes damage-over-time attacks. An ice version slows enemies down. You know the drill here, but the difference is who quickly she can change between elemental attacks, and how much that ability is integrated into gameplay. A quick tap on the D-pad switches between ammo loadouts, allowing the player to experiment with different ammo-types against enemies, which becomes critical when the difficulty ramps up. 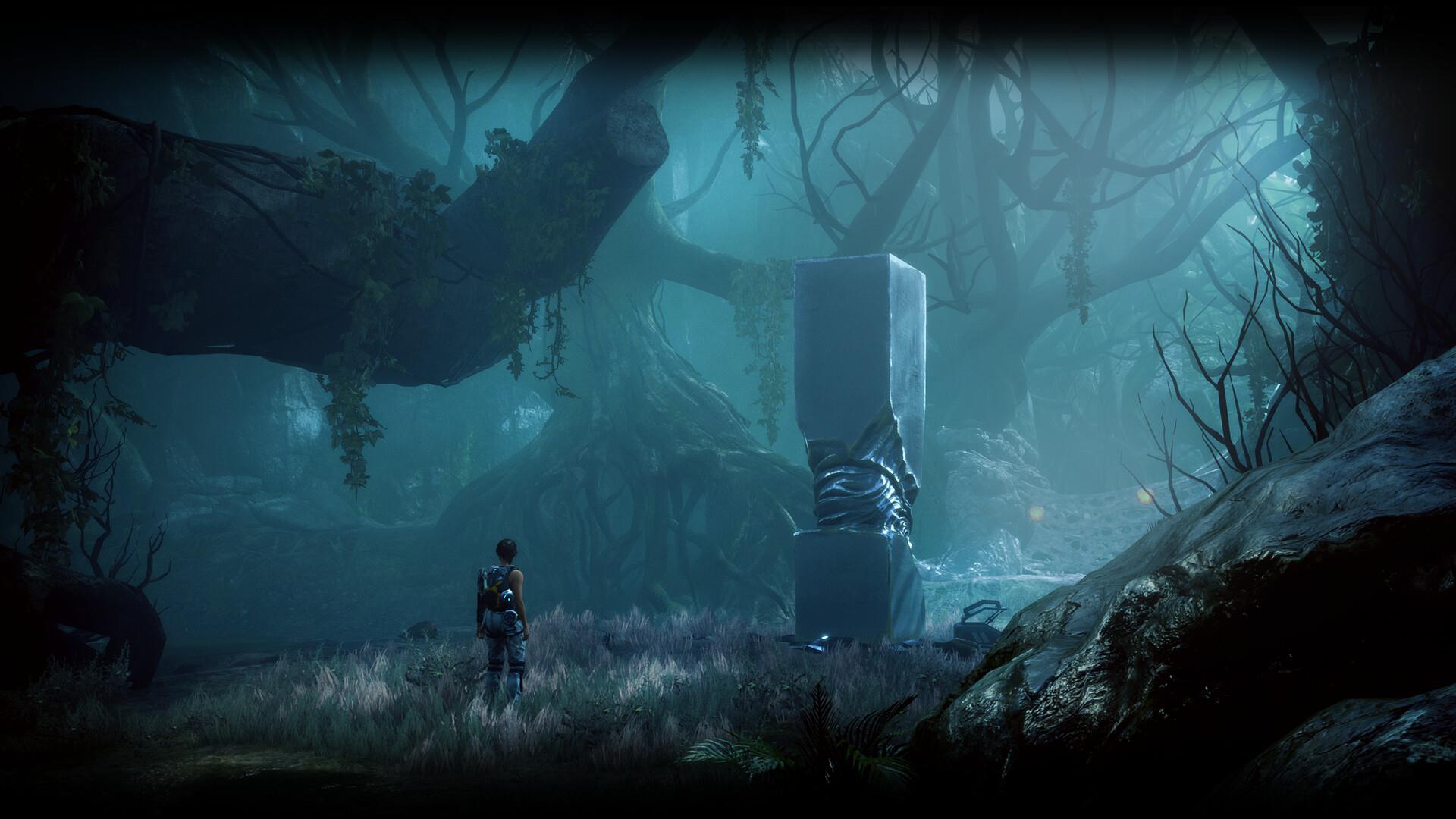 Towards the end of Chapter One of Scars Above, I was faced with a fairly difficult ape-like enemy. We were pitted against each other in a large, round arena space, which he was capable of covering in about zero seconds. The challenge I was faced with was how to take him down using my various ammo types. The ape creature had a large spot on its chest that was obviously vulnerable to flame attacks, but it kept that area well guarded, and moved around so quickly that I couldn't get a bead on it. I was able to do chip damage to his head with lightning ammo, but he quickly got wise and started guarding his face with a rock-like shield on his arm as soon as I would aim my weapon. He would do this thing where he would rage out for a moment and put his arms up in the air, exposing his vulnerable spot (and healing himself, the turd), but the action was so unpredictable and brief that I was never ready for it.

Then, after my sixth-or-so time getting murderized by him, it hit me. I still ran around doing chip damage with the lightning, but then I stopped when I got him down to about half health. I switched to the ice ammo and ran endlessly around the arena, waiting for him to pull his big healing move. As soon as he did, I blasted away with the ice, freezing him in place. Boom. The fire vulnerable spot was open and unprotected. I tapped the D-pad, switched to to fire ammo, and before you knew it, I was jumping in circles around an ape corpse. 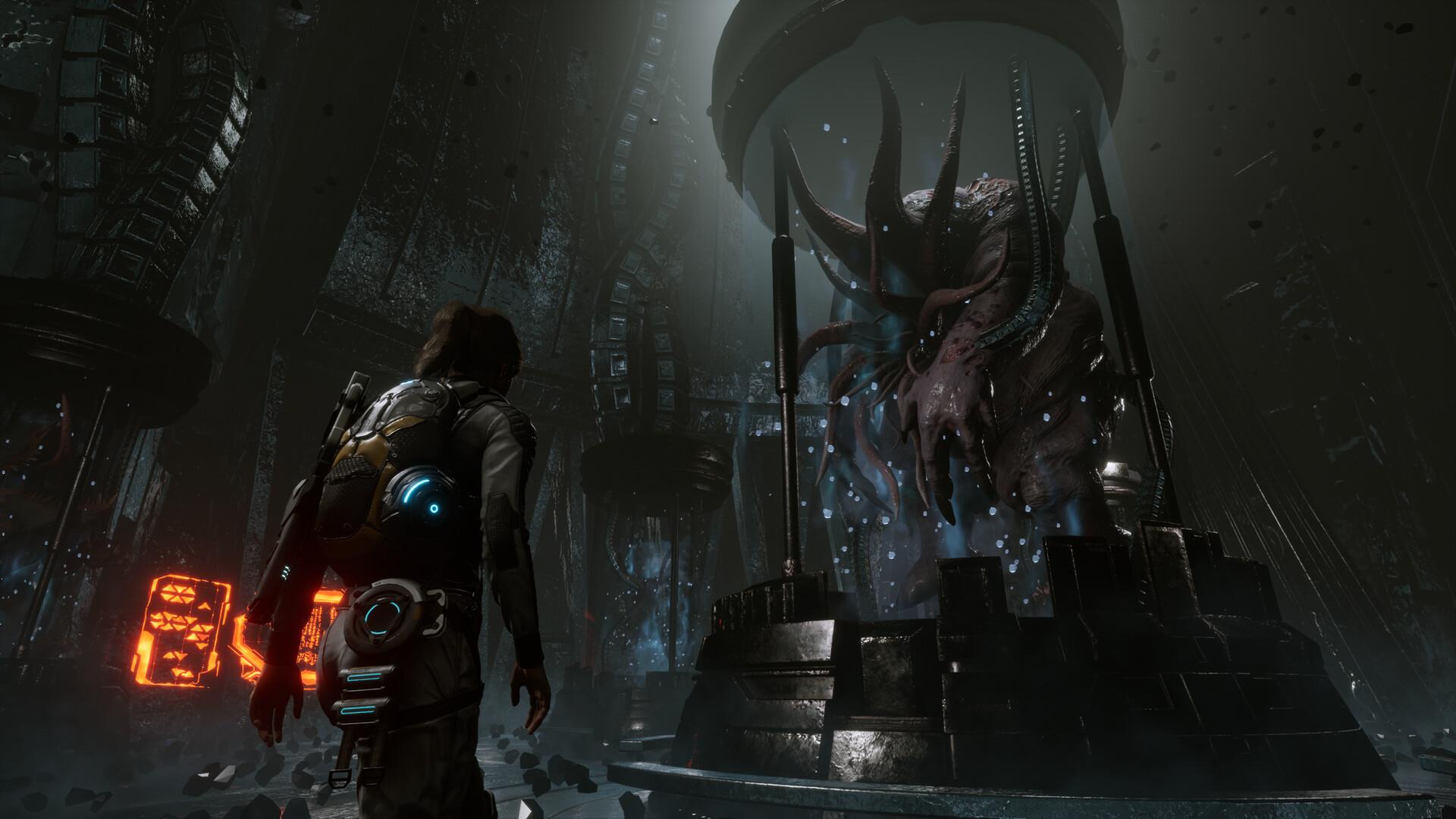 I wouldn't go so far as to call the combat in Scars Above "Souls-like", which I feel is an overused descriptor for game mechanics that require a mixture of deliberation, experimentation, and skill. But I will say that I butted my head into this guy for at least a half hour before I figure out how to take him down, so take that as you will. Scars Above is definitely not a boss rush either, as the exploration aspect is a huge part of the game, and overcoming smaller enemies can be just as challenging the first time you meet them as figuring out bosses (I ran through the first part of the first level like five times before I got my feet under me).

While not an outright horror game, Scars Above is also a bit scary. Creeping through an unknown area can be very frightening, especially since the game is not at all shy about popping bad guys up behind you. The sound design keeps you on your toes, as you can constantly hear threatening-sounding things moving around in the brush. More than once, some harmless creature would come scurrying by, only to be greeted by me screaming, cursing, and unloading a clip of lightning into the ground all around it. 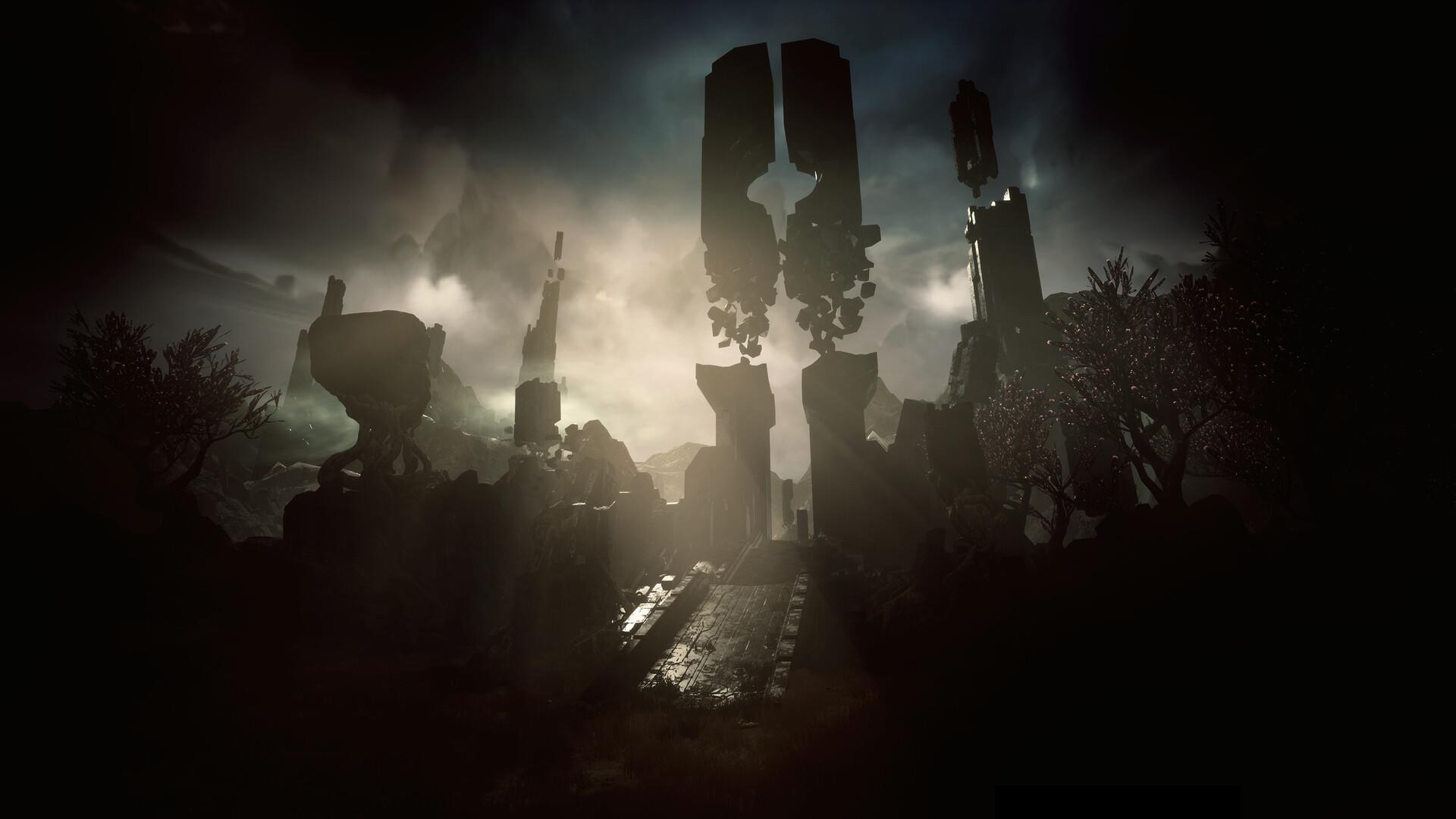 Scars Above looks like it is going to be a pretty good time for fans of challenging shooters. Definitely not a mindless run-and-gun experience, Scars Above will appeal to a hardcore audience that enjoys a bit of thinking and strategy with their zappy guns. And of course, there are the mysteries to solve. That Metahedron isn't going to figure itself out, after all.

Crew positions aboard the Hermes open up on February 27, 2023. Prospective crew members can wishlist Scars Above on Steam here.