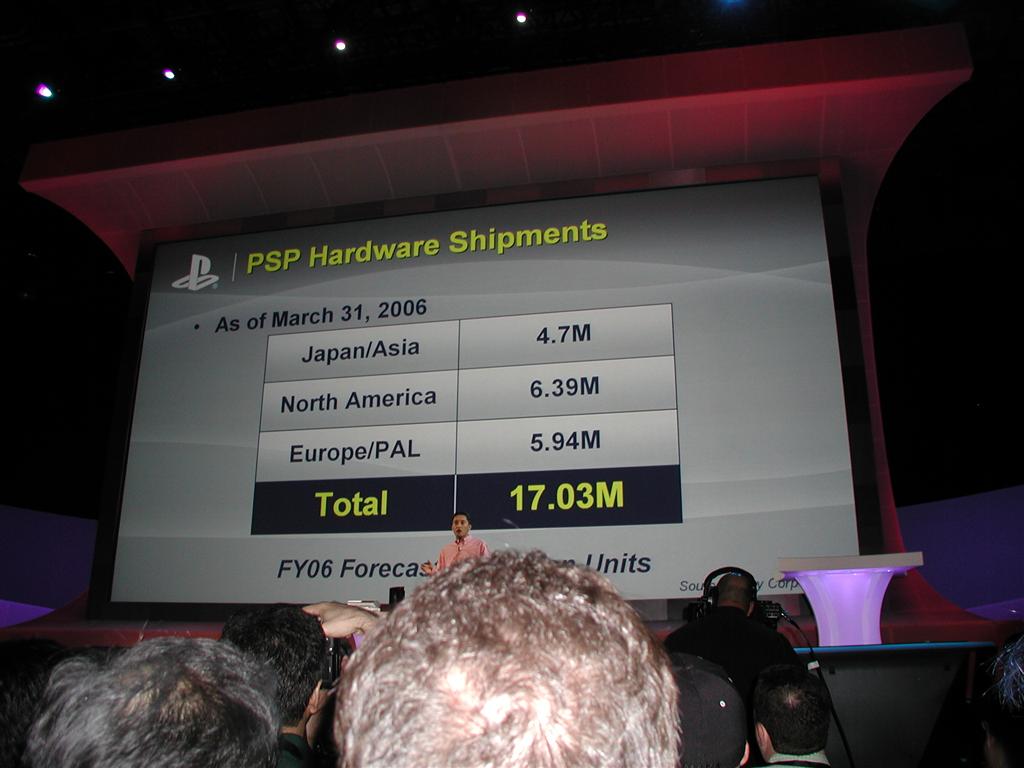 Since John has already posted the events of the Sony press conference as they were happening I’m not going to repeat everything he had but try to add a little flavor from my perspective of being at the press conference.

For some reason they didn’t start letting people into the press conference until after 4:45 which means that those of us who got in line at 3:50 to beat the rush stood in line for almost an hour.  Frustrating in the heat and for those of us who are “folicly” challenged it means that we have a little bit of sunburn on the top of our heads but nothing we can’t handle.

Once we got seated (thanks to Sony for putting us in the front area of the show) it was show time.  Sony started off talking about the numbers for the PS2 and mentioned that the PS2 will continue to be supported and with some 216 games coming out by years end for the console they are certainly going to continue to support the console (something that Microsoft has failed to do with the Xbox).

The new PSP titles look like a bit of a mixed bag.  While I don’t own a PSP right now (I’m borrowing one from a friend for the trip though) the only titles that really stood out for me last night was the footage from Roboloco and Killzone: Elimination.  Both look like they could be killer games for the system, the rest of the titles just didn’t have as much pull.

For me the rest of the Playstation 3 stuff was a bit of a mixed bag.  Sony showed off a lot of cool new technology demonstrations but I’m not sure how well a lot of it is going to go over in the real world.  Here are some random thoughts on what was shown.

Eye of Judgment: A combat card game that uses the Eye Toy camera to scan the cards and then show animations over the cards.  For some reason I was kind of reminded of the holo-chess game on the Millennium Falcon in the original Star Wars movie but that’s just me.  Of course you’ll need to buy the board, the special Eye Toy rig (it had to hang over the board) as well as the cards.  Again kind of a cool demonstration but I wonder about the real world applications.

Online/Microtransactions – This is one area where I think Sony can really make some in roads on Microsoft in both a good in a bad way.  The good side is that you’ll be able to purchase content from the vast Sony library.  They showed some footage from Singstar, a karaoke type game, that allowed you to go online and purchase new songs from Sony recording artists.  Not only do you get the song but you also get the video which plays behind the scenes.  One could easily imagine them offering the same music and videos separately which could be kind of cool for those of you who like to collect music and movies.

The downside is that the example for the new Warhawk game that they showed featured the ability for gamers to download new weapons and levels for download.  While new levels are nothing new having to download new weapons seems a bit off.  The prices they listed while certainly only placeholders were also a bit high as it cost almost $7 for one level of a game.

It also looks like Sony will offer the prices in denominations rather than abstracting the cost of items by having users having to convert their currency into something else like Microsoft does with their credit system.  Sony will be selling stored value cards which you will be able to purchase separately and use yourself or give as gifts (much like Microsoft currently does).

Grand Turismo 4:HD – a nice demonstration of running an old game in super high definition (1920 X 1080P) but other than the new interface screens I wasn’t really that impressed with the demonstration that much.

Gengi II – Looks good if you are into that type of game but not something that was really earthshaking in its “next generationess”.  Apparently lots of crab monsters in feudal .

Heavenly Sword – Hey look, Kratos now has long red hair and breasts.  I kid, I kid as this was one of the best looking games they showed.

Afrika – Lots of decent graphics but what about the game play?

Eight days – Reminded me a bit of the Killzone 2 footage from last year.  If they can deliver anything close to this it should be pretty good.

Untitled Naughty Dog game – Looks like a Tomb Raider/Far Cry crossover kind of game.  I mean that in the best possible way as this game actually looked really good and what they showed seemed a lot closer to actual game play than Eight Days.

Resistance: Fall of Man - Alternative history FPS game where Earth was invaded prior to WWII and you are tasked with saving from the unknown invaders.  Kind of a generic looking FPS with some cool weapons.  Will feature 32 player multiplayer though so could be kind of cool if implemented well.  Fan boys might start calling this the Halo killer but I wouldn’t believe them.

Sony showed several trailers of game footage from various third party games under development.  The ones that stood out to me were Assassins Creeds Ridge Racer, Armored Core 4, and Metal Gear Solid 4.

EA battled cleanup for the third party developers and actually showed off some interesting details.  Their new technologies for player movement, awareness, and foot planting should really help move their sports games forward as players will not actually glide in place in more when turning but will actually move realistically and react better to the game situations they are in.

It’s not all about movement as EA also showed off their new UCAP capturing system which creates helps create awesomely good looking character models, almost to the scary/creep levels of detail.  The virtual Tiger Woods they showed off was really impressive with an amazing amount of detail in the character model.  Not just in terms of the model itself but in the level of emotion that the model showed.  I’m interested to see if they use any of this technology in any of their other games as I could see bringing in real life actors to help with them with the creation of digital characters for other games.

What’s interesting about the EA discussion is that none of these items are necessarily exclusive to the PS3 and could be used to develop games for the Xbox 360 or the Wii.

Like most press conferences Sony made us suffer through bunch of boring crap before closing the event with a bang.  Up until the last minute of the show I have to admit I was really disappointed with the press conference experience.  Then Sony gave us the release date of November 11th for and November 17th for the and and I perked up a bit.

Sony then followed that up by announcing their pricing strategy.  $499 for a PS3 with a 20GB hard drive and $599 for a PS3 with a 60GB hard drive.  They conveniently  didn’t mention that the 20GB PS3 (let’s call it the Core version for the sake of yuks) will not ship with a SD/CF/or memory stick reader, it won’t have the built in wireless, and worse of all it won’t come with HDMI output which may mean that the device will not be able to play Blu-Ray movies as the copyright protection for Blu Ray is being handled by the output.  They may get around it at some level (as Microsoft appears to be doing with their HD DVD player) but not mentioning these items in the press conference left a really sour taste in my mouth.  Sure I thought the Core edition of the Xbox 360 was a bad idea but at least you could upgrade the Core edition into a Pro version by purchasing a hard drive and wireless controller but unless they announce separate add-ons for the PS3 if you buy the lower version you are kind of hosed.

After getting the information Sony showed off the new PS3 controller, which surprising looked a lot like the old PS3 controller except with out the wire and with some kind of gyroscope in side that would allow for six degrees of movement.  We then got a good demo of this in action as they showed a demo of the new version of Warhawk with the new controller.  It was actually pretty cool but after looking at the developer playing the game I think that between this and the Wii controller that we are all going to look kind of odd(er?) as we play the next generation of games.

The new controller does beg the question of why they included the features this late in the development cycle of the console and if there will be any other games that take advantage of the new degrees of motion.  It does feel a bit tacked on to me and a bit of a shot at the Wii but unlike the Wii it is not baked in to the core of the gameplay.

All in all it wasn’t necessarily a bad press conference, it just wasn’t’ a very good one.  Sony showed off a lot of cool technology demonstrations and a lot of potential but none of the games really made much of an impression on me outside of Heavenly Blade and Assassins Creed.  The fact that I’m not a Final Fantasy fan or a Metal Gear Solid fan impacts that but there really wasn’t anything that really got the blood moving at the show.

The entire Sony experience has had a lot of rough edges this year for some reason but since the proof is in the pudding I guess I’ll hold off judgment until I play the units at the show this week.