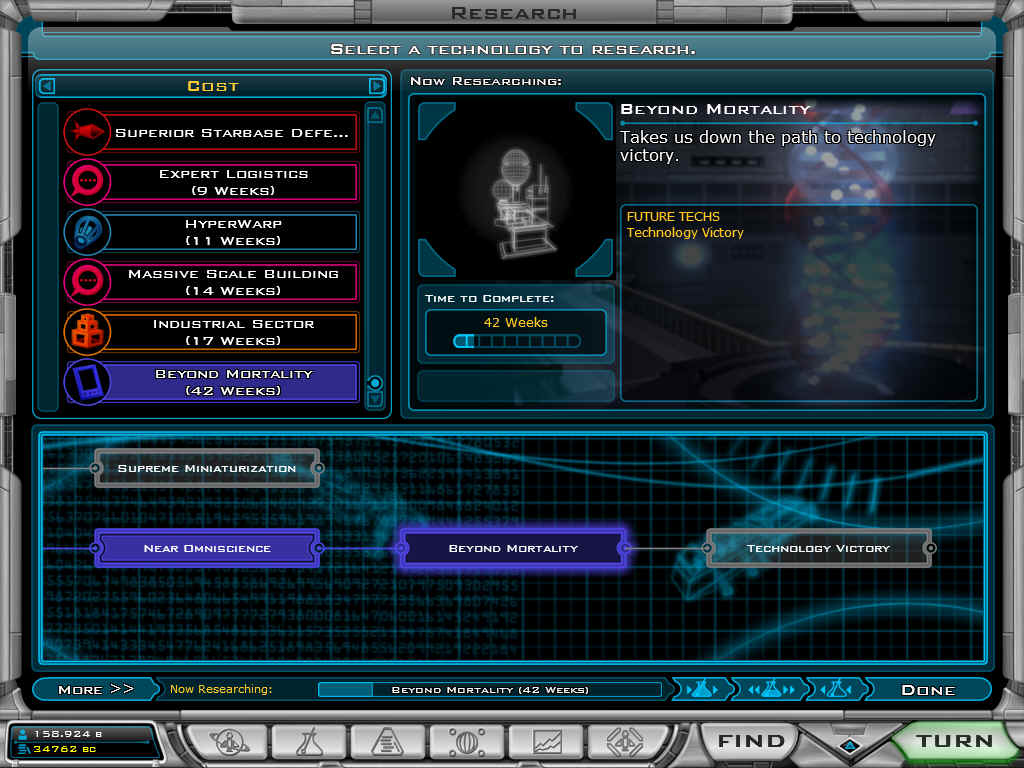 I have been closely following the development of Galactic Civilizations 2: Dread Lords ever since its announcement a few years ago.  The original Galactic Civilizations was quite easily one of my favorite games of all time, and although it was far from perfect, I spent a great many hours conquering the galaxy.  Given my feelings for the original title, I was a little worried about what would be done in a sequel—a fine line needed to be walked in order to maintain the balance and flavor of the rich GalCiv universe while bolstering the weak points of the game.  I shouldn’t have fretted, as Stardock has delivered another amazing 4X strategy title, and once again hours are melting away in turn-based galactic conquest.

Galactic Civilizations 2 carries over the same basic premise as the original.  For all the “known” spacefaring races, interstellar travel was restricted to a series of hyperspace stargate devices, severely limiting exploration.  Humans, never ones to leave “good enough” alone, started tinkering with a nearby stargate, and from their experimentation discovered gate-independent hyperspace engines, thus allowing for the exploration and colonization of the un-gated portions of the galaxy.  Once this technology spread to the rest of the galactic empires, the race was on to conquer or control the galaxy through warfare, diplomacy, or technological or cultural superiority.

Even when setting up the first sandbox galaxy, one discovers that there is an immense amount of customizability to GalCiv2.  From galaxy size to number and quality of planets, a game is available for each and every taste and play style.  After the galaxy is designed, players are presented with 9 Civilizations to chose from, each with their own strengths and weaknesses.  In addition, each of the races can be further tweaked with a host of skills and bonuses.  And if that isn’t enough, a completely customized race can be built from the ground up.  Once a Civilization is chosen, it’s time to choose the other inhabitants of the galaxy, along with their relative intelligence.  Here’s where I have a minor quibble—I would have liked to see a “random” setting, making the galactic neighbors a mystery until they were encountered.

Each race begins the game with a single homeworld, a colony ship, and a survey ship.  From there, they must research, build, explore, and conquer or ally with their neighbors until victory is achieved.  Like the original, there are many roads to victory, and it’s possible (although difficult) to emerge victorious without ever resorting to violence.  Of course, violence is quite an effective path toward ruling the galaxy.  Victory can be achieved through military might, simply crushing the rest of the galaxy under one’s heel.  Or a civilization can choose the long, difficult technological road, eventually learning enough of the universe’s secrets that they shed the physical shell and move on to a higher plane of existence.  Diplomatic victories are also possible, allowing civilizations to wheedle and cajole their way to ruling.  And finally, races can gain superiority through an insidious culture war, influencing the galaxy through brand-name items and entertainment.

Regardless of the victory path chosen, the game looks and plays beautifully.  GalCiv2 received a huge graphical overhaul, moving to a full 3D engine for everything from ships to planets.  Each race has a unique look and feel, and there was never any problem differentiating one fleet from the next.  Combat is fully animated, and while there is no player control once the fighting starts, it’s a blast to sit back and watch the outcome.  GalCiv2’s audio is also well done, though subtle.  The interface is incredibly smooth, and even though there is a great deal of information to assimilate, from planetary development to starship deployment, it’s never overwhelming.

Speaking of planetary development, here Galactic Civilizations 2 makes one of its biggest improvements over the original.  Before, planets were assigned a pseudo-useful number indicating habitability.  I never quite understood what the number meant, but I was pretty sure a bigger number was better.  There was also no limit to what sorts of improvements could be built on a particular planet, so many games consisted of finding one or two “superplanets” and using them to crank out pretty much an entire empire’s worth of research and ships.  This is not the case in GalCiv2.  Now, each planet’s rating indicates the number of useable tiles that can hold improvements.  With this severely limited amount of space, planets must be specialized in their improvement.  Furthermore, the improvements themselves are much more useful (and worthwhile) than they were in the original.  All in all, the planetary side of things is a much more rewarding experience this time around.

Of course, improving a civilization’s military and infrastructure isn’t possible without research.  Galactic Civilizations 2 has a fairly extensive technology tree at its disposal, although the tree itself isn’t terribly interesting.  For example, “Laser Mk. II” follows the discovery of “Laser Mk. I”.  Although I don’t mind this straightforward approach, some might be put off by the lack of technological flair.  Also, the technology tree isn’t one with a lot of branches.  Researching the “Beam Weapons” line of technology only leads to better and better beam weapons, without any cross-over to, say, new propulsion or computing abilities.  While this certainly makes sense, it is a change of pace from many other 4X games in which technologies had many levels of prerequisite advancements.  For me, it works quite well, but some may find it a bit disappointing.

One of the biggest complaints from the original was the lack of a ship-building mechanic.  I’m happy to say, GalCiv2 has one of the best ship-customizing features I’ve seen in a 4X game.  Usually, I don’t find myself enthralled with the ability to build my own ships, and as such I tend to spend the least amount of time possible playing with design.  However, given the ease and power of the GalCiv2 features, I was spending hours simply twiddling with different hull and cosmetic designs.  Each hull type can carry a certain amount of weaponry, defenses, and other improvements.  Increasing technology levels allows players to fit more and better equipment on a given hull, or opens up new hulls for design.  In addition, each ship can be greatly customized with no-cost aesthetic improvements, allowing for some pretty amazing design possibilities.

The computer AI is one of the best I’ve seen in a game, 4X or otherwise.  While there is no multiplayer component, the AI does a very good job at providing a very “human” feel to the opponents.  At easier difficulties, the AI will make clumsy beginner mistakes, but crank the difficulty dial up to a higher setting, and you’ll be surprised to see long-term planning, backstabbing, careful tactical consideration, and even taunting.  And, as far as I could tell, I didn’t detect any of the obvious “cheating” that becomes apparent in other games of this type.  Sure, at higher difficulties, the computer is given a financial edge at the beginning of the game, but there doesn’t appear to be any of the “cheese” that some games utilize, such as letting the computer have knowledge of the entire galactic map.  It was quite refreshing.  As for the lack of multiplayer, I have to say I don’t miss it one bit.  For myself, I hardly play online unless I’m running a review, so I appreciate the fact that Stardock decided to concentrate on balancing a game perfectly for the single-player experience.

Also included is a very strong campaign mode, stringing together a rather interesting tale of the emergence of an ancient (and very powerful) galactic presence.  With a branching storyline, losing a particular scenario isn’t the end of the game.  In fact, to see all the scenarios, players will have to fail occasionally.  Unlike most campaigns included in games like these, the Dread Lords campaign isn’t a teaching campaign.  Players had better have a good handle on the sandbox play before jumping into the campaign mode.

All in all, Galactic Civilizations 2 is the best space-based 4X game since, well, the original Galactic Civilizations.  To top things off, Stardock has incredible player support for their titles, so players are guaranteed that GalCiv2 will be a continuously-improving, ever-evolving game.  Stardock listens to its players, learns from them, and consistently delivers what their player-base wants.  Out of the box, GalCiv2 is a great game, and I wouldn’t hesitate to recommend it to strategy fans everywhere.  Given the promise of continuing polish, improvements, and additional content, I predict GalCiv2 will be a strategy joy for many years to come.

An incredible 4X space-based strategy title, sure to cause sleepless nights and groggy mornings. For those with â€œone-more-turn syndromeâ€, this one will consume your world.