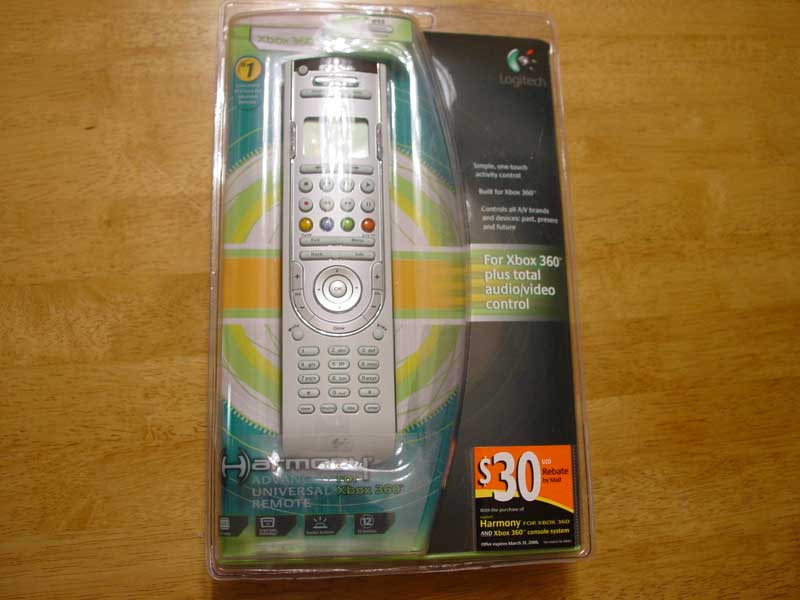 For a few weeks, the premium bundle of the Xbox 360 contained a small remote to control the unit. It wasn’t anything spectacular but it was something for those that were going to use the Xbox 360 as more than just a gaming console and wanted a remote to control the multimedia functions rather than using the wireless controller. If you purchase the premium bundle now, you’ll most likely be missing this little remote, like I did. To be honest, the remote that came with the bundle wasn’t anything to write home about but there is one remote especially branded to work with your Xbox 360 from a company that knows remotes and that’s Logitech. The Harmony line of remotes is some of the best around and it was only natural that they develop an Xbox 360 branded remote. With that said, here’s a review of the Harmony Advanced Universal Remote for Xbox 360.

From top to bottom, the remote features a plethora of buttons. First off is a single power button on the top left. This button’s pretty self explanatory as it will turn on and off devices.

The activities button on this remote really helps sets this device apart. If you’re like me, you have plenty of devices that you want to control in your entertainment center. Within that, there are a few things you do that can be broken down into activities such as watching a DVD, listening to the radio, or watching TV. You have a sequence of buttons on one or various remotes to get your whole setup going. In the past, there were macro buttons where you could program the sequence in manually. With the Harmony 360 remote, that’s all in the past. Using the website to setup what devices you have, you will then setup an activity. By answering a few questions such as what device is used for audio and what input the TV should be on, the web application sets up all the button presses in sequence for you. It’s really that easy. I have a Pioneer receiver, Panasonic LCD HDTV, a Microsoft XP Media Center 2005 PC, and the Xbox 360 as my main setup. After putting in the devices, setting up a few activities, and downloading the information via a USB cable to the remote I pointed the Xbox 360 remote to my entertainment center that was all turned off.  Pressing the button that had the Watch TV activity assigned to it, the remote proceeded to turn on the receiver, set it to TV, set my Media Center to the MyTV menu, turned on my TV, waited about 10 seconds, and then switched the input to component 1. I didn’t have to do much other than answer a few questions and the remote knew the order and to wait for my TV to warm up from a cold start to switch the inputs. Now that’s slick programming.

Another nice thing about these activities is that the remote knows what state each device is in. Pressing the Play Xbox 360 activity button, the remote switched my receiver to DVD, turned on the Xbox 360, and switched the input to component 2. It knew the TV and receiver was already on so it didn’t send the power signals to the devices. Activating the Listen to Radio button, the remote proceeded to turn off my TV, turn off the Xbox 360, and switch my receiver to Radio.  The way activities are handled in the Harmony Xbox 360 remote is one of the strong suites that set this remote apart from all others.

The devices button lists all the devices that you have programmed the remote for. For the few times you don’t use the activities button, this is one way to get to a specific component and control the functions of that component. I find myself using this feature only when one of the devices didn’t receive the IR signal so a step was missed. This usually happens when my remote is low on battery power so I know that if I start using the devices button a lot, then it’s time to change the batteries.

If you’re having trouble with a certain component’s state, the help button next to the devices button can guide non-tech savvy folks through troubleshooting the problem. When pressed, the remote displays some basic questions to try and fix the issue. This can really help those that are intimidated by complex remotes. The easy to follow instructions will help you easily troubleshoot any problems you have.

A nice LCD display with a green backlight displays all the information in nice clear text. Here is where you will see the list of activities displayed, help questions, and more control options. Two buttons on either side of the LCD display correspond with the function listed on the LCD. If there are more functions you need but don’t have the buttons on the rest of the remote to accommodate it, you can set them up here. This feature really makes the remote versatile as you can put any remote command from any device and map them to one of the four LCD buttons. If you want more than four commands, you can setup a few more pages of commands which can be accessed with the left and right arrows underneath.

Underneath the navigation buttons are the basic VCR buttons. Here you can control your DVD player or your DVR. The buttons are nicely separated with a very nice feel to them. I do like the positioning of the buttons with the play and stop button on either side of the chapter skip button. Those are the ones I do use the most. The pause button is also easily accessible on the right side underneath the play button.
The four Xbox 360 buttons are positioned X, Y, A, and B along one row. These buttons will work to navigate around the Xbox 360 blades but can’t be used in games. I tried using the remote to play Bejeweled 2 but the buttons didn’t register in the game. That’s a little disappointing but not really a deal breaker.

In the middle of the remote there is the nice navigational pad. The pad features four directions and a nice feeling OK button in the middle. The OK button is slightly raised and rounded given it a more distinct feel. You will use the navigation pad to move around the blades and through the menus when using the Xbox 360 as a Media Center Extender. Compared to the Harmony 688, I do like the style and feel of the pad here. It’s a little more comfortable for me when navigating with the thumb here. When glowing, it looks very similar to the ring of light that’s on the console and controllers.

On either side of the navigational pad are the channel and volume controls. These four buttons allow you to change the channels and adjust the volume on the device it is set for. They are long and easily reachable with your thumb.

In dark times, you’ll want the remote to be illuminated and that’s where the glow button comes in. Pressing the button turns on the green backlight and the whole remote shines through. The cool thing about how the buttons glows is that unlike the Harmony 688, the buttons mostly light up at the command label and on the outer edge of most buttons. You can easily see what button does what in the dark this way.

Below the glow button are the number keys that you can use to select channels, chapters, and also input text. The keys are clearly marked, nicely sized, and have good spacing between them.

The remote is powered by four AAA batteries. The batteries are housed in the lower part of the remote. The battery compartment also doubles as a nice grip for the palm of your hand. As you move up the back side of the remote, it gets thinner over two levels. The back is also coated with a nice comfortable rubber coating.

If you have never experienced programming a Harmony remote, let me just say that it’s one of the easiest experiences you will have. The wizard that Harmony has created can have you up and running in a few easy steps. By going through and listing all the components you have as well as the activities you want, the Harmony website will setup a file that contains commands for everything. Once you download that file into your remote, you’re ready to go. Changes to what the buttons do can easily be done through the web page so if you want to customize the setup a little more you can easily do so. All the buttons can be programmed to do something else so the flexibility is there to really make the remote your own.

As mentioned earlier, a major advantage of this remote is the ease of programming via the web. To send commands to the remote, there’s a small USB plug located near the IR transmitter that’s covered by a small rubber flap. The remote can also learn commands in case there’s something the Harmony company has missed. The learning IR receiver is located at the bottom of the remote.

Overall, the remote was pretty comfortable to hold and use. The large base made it easy to hold and the back coating also made it comfortable. The buttons you frequently press are located within easy reach of your thumb when holding the remote at the base.

Logitech’s Harmony Advanced Universal Remote for Xbox 360 offers multimedia controlling nirvana for complex and simple setups. The remote not only fits well with the Xbox 360 style but it’s comfortable to hold, easy to use, and easy to program. It doesn’t have as many buttons as the higher end remotes from Harmony but what it has should be enough for most people. One missing button I would’ve liked to have seen would be the green button but you can easily program one of the other buttons for that function. At $100, the remote isn’t priced too shabby and offers a plethora of features. Nicely designed and backed by the great Harmony service, the Harmony Advanced Universal Remote for Xbox 360 should be seriously considered if you’re in search of a multifunction remote for your Xbox 360.

The Harmony line of remotes are really nice and the Advanced Universal Remote for the Xbox 360 continues that tradition. While more expensive than the Microsoft remote, the Harmony offers you much more as well.